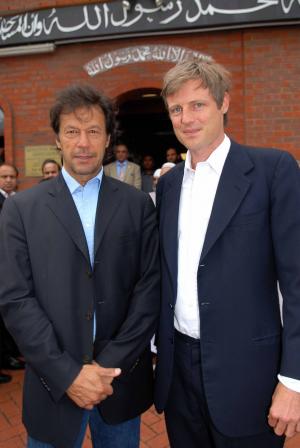 The former cricket skipper, known in some circles as Taliban Khan, is heavily engaged with Muslim voters in London’s Richmond Park battleground constituency where the young Goldsmith is fighting hard to unseat the incumbent Liberal Democrat MP Susan Kramer.

Khan, who is in London these days, campaigning vigorously with Goldsmiths has already twice door-stepped the congregation during his last two visits to London and plans to persuade the mainly Pakistani and Indian origin mosque-goers to vote for Zac Goldsmith.

His campaign team confirmed to The News during Friday prayers on March 12, Jemima Khan will accompany her brother and former husband.The general election in the UK is expected to be held on May 6 and the incumbent Labour Party is battling hard to minimise a few points lead Conservatives hold at the moment.

Zac Goldsmith, 35, whose full name is Frank Zacharias Robin Goldsmith, is one of the heirs to the wealth of billionaire Jewish financier, Sir James Goldsmith.The younger brother of Jemima Khan is one of the highest flying members of Conservative leader David Cameron’s inner circle, all of whom trace their roots and commonalities to an upper-class upbringing and education at the Eton College.

Radically conservative and opposed to immigration, Conservatives under David Cameron have liked to brand themselves as the modernists and inclusive but a significant section of the Tories remains right-wing.

They are opposed to Cameron’s modernist overtures and the cutting-edge influence of his close friends such as Zac Goldmith and others. They see Zac Goldsmith’s decision to ask Imran Khan to accompany him to the Kingston Masjid as a sign that the new-look Tories under Cameron will go to any limits to pursue votes, even using those, like right wing leader Imran Khan.

After divorcing each other in June 2004 amicably, both Jemima and Imran Khan remain close to each other and during his frequent visits to London, the former cricketer enjoys staying always at his former mother-in-law Lady Annabel Goldsmith’s posh residence in affluent upper-class Richmond suburb.

Imran Khan denies publicly that he is supportive of the Taliban and al-Qaeda but he is well-known for his intransigent views and he has used every opportunity to voice support for a dialogue with the Taliban.

Speaking to The News, Imran Khan said he was supporting Zac Goldmsith’s campaign whole-heartedly because “he does not need a career in politics… hence will take a stand for justice. Since he is like a younger brother I know his views and what he stands for.”

Please watch the link below between 29 -32 minutes. Iftikhar Ahmed asked him if you can justify suicide attacks by Taliban. Imran said I can explain. Iftikhar said, no I am saying can you justify? Imran said I can even jutify them whenthey are against military targets.

This shows the hypocrisy that Imran Khan’s Fan Club simply can not see. On one hand he blames Isreal for anything and everything and on the other hand he is campaigning hard for jews and friends of Isreal to further strengthen the influence of jews in power corridors. These fan club members did not object when he married Goldsmith’s daughter why ‘d they now when he is compaigning for his son?

I still wish him good luck. He can’t help anyone win in Pakistan let’s hope things are little different for him overseas. The poor Jazi Khan dropped his vote count from 12000 to 3500 thanks to Imran’s support. Let’s see how his charisma works out for Zac Goldsmith.