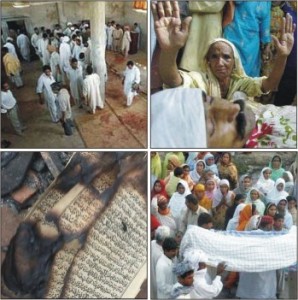 Oh calm the heck down!!!! I am not using the M word, you know, the same word that can be used by killers, murderers, liars, cheaters, and by every type of “ghairatmand”  but Ahmadis (because all the “Real Muslims” agreed on this, do you really know more than our ulema???)

And since they are not M******, they can’t be loyal Pakistanis, which by definition makes them traitors (we should not pay attention to hundreds of Ahmadis who serve in Pakistan military and give their lives in the line of duty). Ahmadis are always crying about how they are persecuted in our tolerant country, and due to their complaints, Pakistan ka naam badnaam hota hai (the real image booster is the discovery of the world’s most wanted terrorist in our backyard!!!).  The whole country is suffering tribulations at this time, but they only care about themselves. Aside from continuous sectarian violence against them, we just don’t want them to call themselves M******, or allow them to pray, or say Salam, or live as equal citizens and we just want to degrade their religious beliefs and holy figures all the time from state to individual level. Is that too much to ask???!!!!

Yeah Yeah I know, Dr. Abdul Salam, who was an Ahmadi, won a Nobel Prize, big deal!!!!(wada aithay Nobel). Don’t you know that the Nobel Prize committee is supported by Zionists and we all know how Ahmadis are working for Zionists (it is clearly shown by their actions when they refuse all sorts of progressive opportunities but never give up their Pakistani nationality and continuously work for the betterment of their country and its people). The only person really worthy of Nobel Prize (for being a murderer extra-ordinaire) was Mumtaz Qadri, but due to the conspiracies of the whole world against us, they portray our real heroes as culprits. Aashiq-e-rasool par jaan qurbaan (it really doesn’t matter if we actually follow our Rasool’s teachings or not).

Moreover, just because we want to kill Ahmadis, doesn’t mean that they start leaving the country. (What!!! Hijrah is Sunnah, jeez I don’t know any such Sunnah, my Mullah Cult didn’t teach me any Islam which involved anything to do with the actual actions of the Prophet). Don’t listen to those “liberals” who are advocating for Ahmadi rights as they are western agents who want to destroy the “Islamic” values of our country. They don’t know that Ahmadis are the real enemies of Islam (it really doesn’t matter that in the past century the only worthy person who has raised voices for Muslim persecutions from Kashmir to Palestine, Libya to Somalia, Morocco to Indonesia on an international arena was also an Ahmadi).

There are some 4 million Ahmadis living in Pakistan whom we have to get rid of, only then we can truly become “the land of the pure”.  If they stay here, they are going to continue ruining Pakistan’s name by achieving higher statuses on international stage or by breaking world records. Didn’t you see how the whole world was praising an 11 year old Ahmadi girl for being the youngest girl to pass 6 O’level exams. What a shame for our country!!! We need more people like those torturers in Karachi madrassas, as only they know how to properly bring up the future generations of Pakistan.