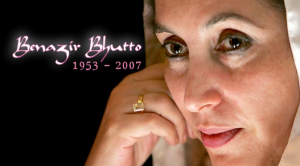 “I made mistakes and I am prepared to admit them but so must others. Others also owe it: they owe it to their own armed forces, to the people of Pakistan and to the Muslim world.” In one of her most candid interviews, Benazir Bhutto bluntly talks about her two terms in office, the difficulties that she faced, the things that she implemented and her vision for the future of Pakistan.

As Pakistanis, we are a little bit crazy when it comes to politics. We either love to make our politicians holy cows so much so that we cannot even accept constructive criticism regarding their policies or we just hate them to the extent that we will believe any allegations against them without even needing or wanting a proof. Benazir Bhutto fits perfectly into both camps. There are those who are ever ready to admire her (and very rightly so) for her courage and struggle for democracy in Pakistan by overlooking some of the faulty laws or policies enacted by her party; At the same time, there is certainly no shortage of those who are only going to believe whatever her opposition has to say and will never pay attention to her sacrifices for this country.

Despite being in power twice, she was a great believer in the power of the people and saw herself just as their representative, not a ruler. Even though military in Pakistan has always been successful in getting public support by picking up causes that has hurt this country in the end more than anything else, Bhutto always wanted to play the game of politics through proper channel in an unfair system which was ever ready to demolish democracy even before it had any chance to blossom. She believed that it was the people of Pakistan that should determine the future of this country as it is their country. “The real solution lies not with any individual. I can only give a clarion call. Then it depends on the masses whether they rally around that call to say that they want a constitution based on the supremacy of the will of the people and that the prime minister and parliament must determine national security and not the military.” However, I must say, we as people have disappointed her.

And it is not just a thing of the past, just look at the power balance in Pakistan today. People are always very sensitive to listen to any criticism of our military leadership and intelligence agencies. What they fail to realize is that pointing the mistakes of policies that are destroying our country is not less patriotic or treasonous; In fact it is more patriotic because you always criticize those who you love the most. If you don’t care about something, you are never going to interfere in their business and let them go down the path of destruction. But in case of Pakistan, the role of such institutions “has led to the destabilisation of political governments, the collapse of the economy and has undermined our standing in the international community.” Therefore, it is our duty as citizens of this state to question and speak against those whose decisions are causing problems for this country. The tragedy however, is that majority of our nation is unaware of the past and present policies of army and intelligence that has led Pakistan into one chaos after another. Benazir Bhutto clearly express her frustration when she says that people expect politicians to solve our problems but “how can a political party fight an organised military, several intelligence outfits, the president and the judiciary? It is very important to create this awareness. It is very important for the press to come on board to expose these manipulations.”

Now people always malign PPP government for being a puppet of US. You can certainly have your opinions on that but it’s not like the military has been making Pakistan independent of US slavery. In fact, some of the worse puppets that are the cause of our dire state today were army generals who have never cared about the prosperity of ordinary people and have this country be used by outside powers to fight wars with which we had nothing to do with. Despite the role of army in destroying our democracy and persecuting democratically minded leaders, Bhutto’s vision of future Pakistan included reconciliation between different authorities, not confrontation because at the end what matters is Pakistan, which is bigger and better than any one individual or institution. In her words, “It is for us, as a nation, to decide what we want together. The army can reveal its true intentions by eliminating democracy and Quaid-e-Azam’s Pakistan through rule by puppets — and there are a lot of puppets in the market. Or else, the military has to learn to acquiesce to the people’s will. We are all part of the problem and we are all part of the solution. I think there is a need for a frank and open talk between all the different players because, in our own ways, we all love Pakistan.”

Even though she was attacked by religious right for her progressive and modern ideals, she was not only well aware of her roots but also proud of them. For her, it was her identity as a Muslim woman that gave her the courage to do the things that she envisioned and face the atrocities that lied in her path. “I see life as a journey where every single soul is tested by Allah. What sustains me is my faith. I am not a fanatic though my enemies portray me as a fundamentalist with a dupatta on the head and a tasbih in hand. I am devout. I am like many modern Pakistanis who do believe in equal opportunities, freedom and free markets but who also need spiritual sustenance in a world that is increasingly materialistic.”

While this particular interview is some 10 years old, she very accurately predicted the future of Pakistan. Today we are standing at the same cross-roads where we have always found ourselves in. “Either the democratic forces win or the establishment wins. If the establishment wins, the past will be repeated and that is what has happened for 50 years. If the democratic forces win, maybe the 21st century will be different for Pakistan. It is a fight and we are unable to say who will be the winner. But then, democracy is also about evolution. And democracy is also about fighting for what you believe is right and not giving up.”

Just as candidly as she started the interview by accepting her mistakes, with the same honesty she tells that whatever power she has to bring any change, it’s the same as people of Pakistan want to give to her. “I am not a messiah. I can only work within the limitations placed upon me by the people (in terms of my ability to effect constitutional change) and the institutional realities of Pakistan.”

You don’t have to be a PPP or Benazir Bhutto’s supporter to realize that when she talks about the power imbalance in our country, she does have a point. Nations who don’t learn from their past are bound to repeat it and go down the path of doom. Civilizations after civilizations have been destroyed and not a single sign of them has been left just because they forgot to adapt to demands of modern world and were too busy glorifying the past or what could have been. It is high time that we do take a stand for something that we believe in because if we don’t, may be nothing would be left to take a stand for.