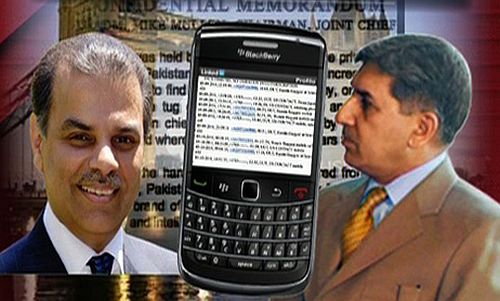 He was never to come to Pakistan and tried to play a bluff game on the government and the people. For nearly two and half months, the whole nation has been kept in a state of limbo by the man called Mansoor Ijaz. Ever since the “memo” was turned into a “gate” ala Richard Nixon style, those who hate the PPP in general and President Zardari in particular, left no stone unturned in creating repeated storms in the same tea cup. Hoping that the bluff Mansoor Ijaz and the military was playing aided and abetted by the PML-N and Supreme Court would come true.

With the “memogate” screws getting disjointed, one feels that the only person having a great laugh is Mansoor Ijaz. How…?

* Mansoor Ijaz lied from day one changing stances. His stances were so funny that one wondered where the proponents of Mansoor Ijaz and ghairat in our country were getting their thought processes from

* Mansoor Ijaz’ past of blaming Pakistan’s military establishment was well known, even the most cited article of 10th October, 2011 in the Financial Times was full of allegations against ISI, yet those who hated the PPP, chose to select one paragraph of the article and built a case against the sitting government. Now if Mansoor Ijaz claims to be a power broker in Pakistan, people will for sure believe him. After all he shook and we did our best to tumble

* He was able to get Pakistan’s military, judiciary and media to tow his line making this act of his kosher compared to all that he has uttered in the past

* He was able to psychologically play on our nerves allowing the selective perception cognitive bias to come out openly, showing how shallow we are. His utterance that a memo was written was accepted but his claim that General Shuja Pasha toured Gulf states seeking approval/support for a possible change of government in Pakistan was ignored to a large extent.

* He was also able to expose who was pro democracy and who was not. For sure the apex judge uttering words like “Sipah-Saalar” for the Chief of Army Staff will ring a bell forever conveniently ignoring that the head they were looking to roll, i.e. President Zardari was the Supreme Commander of the country! Similarly, the order that Husain Haqqani may not go out of Pakistan, effectively putting him on ECL are prime examples.

* His demands that he be provided fool proof security and the way our establishment went overboard in trying to appease him is
nothing but laughable. It would also go to show to the outside world, how gullible we are. He was never to come and he never did, but made us all a big fool.

There can be many other points which can be added here. For Nawaz Sharif, it was an opportunity to derail the system possibly before the Senate elections. With that being a remote possibility, we feel that post Senate elections, no one would even demand general elections before March 2013!!! For the mindless media, they got yet another opportunity to settle scores with the government.

Husain Haqqani’s resignation, President Zardari’s health, numerous scenarios of a coup, Bangladesh model being implemented, Mansoor Ijaz’ Pandora box etc created a great story for them to go on and on. Did they succeed in achieving their ultimate goal of bringing down the government? No!

For our military there is for sure silver lining, which was the resignation and removal of Husain Haqqani. That they could have done
by directly exerting pressure on the government rather than creating a fuss like this.

We would also like to applaud Prime Minister Yousaf Raza Gillani for his obdurate stance throughout this episode. We have had instances that those who want to stick to power or save their necks, they jump ship. Prime Minister did not. He still retains power and his neck is still safe. This is what a long term strategy is all about. Thank you Mr. Prime Minister.

As far as Mansoor Ijaz is concerned, he made the whole country into a Stupidisco minus the girls! For sure there was some tumbling going on, but we did prove ourselves to be stupid of the highest order falling in his game trap.