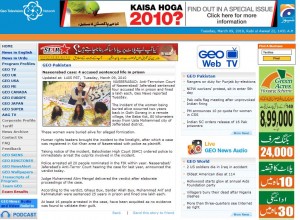 Two years ago in a remote village of Goth Gorang (Balochistan), three women were burnt alive for alleged fornication. An anti-terrorism court of Jafferabad today sentenced the accused four men to life imprisonment and heavy fine each.

Geo TV website http://geo.tv/3-9-2010/60720.htm today covers the news in its usual baseless propagandist flavor. The news bulletin has animated images of three women being burnt alive by a spiteful fanatic holding an axe with a notorious smile. Wall behind the despicable man reads “Long Live Bilawal Bhutto Zardari”. Of course the image is borrowed from a Geo TV’s entertainment program primarily ridiculing an elected Government and making a comic story out of grim national issues and personalities.

This is a deliberate attempt by the Jang Group to abuse the ruling Pakistan People’s Party and its leadership. The Pakistan People’s Party has a proud history of fighting for the rights of women and minorities in Pakistan. Benazir Bhutto was twice Prime Minister of the Islamic Republic of Pakistan and worked extensively for the constitutional rights and civil liberties of women. The sitting Government has for the first time in the history of Pakistan approved Bills for women protection in the highest legislatures of the state.

Purposefully affiliating the Pakistan People’s Party to such wicked and immoral incidents is shameful. Unlike the Punjab Government flogging naked prisoners in public and its Ministers cuddling with banned terrorist organizations for votes, the Pakistan Peoples’ Party and its Leadership has a glorifying precedent of rooting out intimidation of women at all levels.

We at LUBP strongly protest against the biased and unsubstantiated reporting of Geo TV. The Jang Group itself harbors notorious extremist mouthpieces like Hamid Mir, Kamran Khan, Ansar Abbasi and Dr Shahid Masood who repeatedly sustain the radical ideals in their shows.

We request the Interior Minister Mr Rehman Malik to look into the issue and bring the hidden motives of Geo TV to justice.