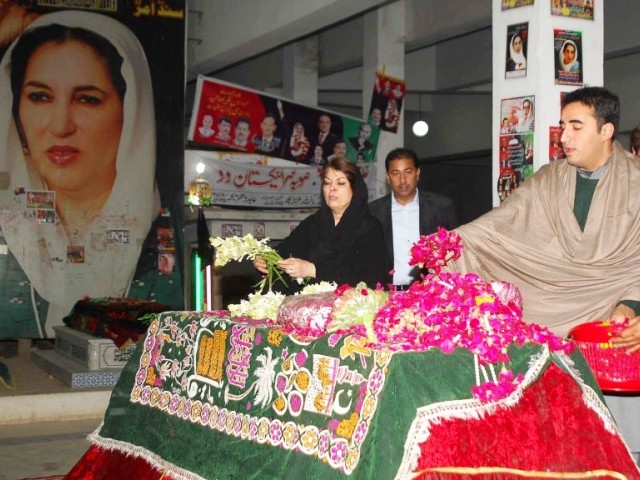 December 27, 2007 – the day, when the entire Pakistani population was left orphan and in obscurity, the journey of Shaheed Mohtarmah Benazir Bhutto’s perpetuity began. She was not buried under mud – she was laid in a divan of roses. The slogans of “Zinda Hai Bibi, Zinda Hai” engaged the ambiance – ostensibly sending frissons to the enemies of Pakistan and democracy, her murderers. Benazir Bhutto Shaheed’s legacy had to be carried forwards, and in such crucial instants of the country’s history, the 19 year old son of Benazir Bhutto, Bilawal Bhutto Zardari stepped forwards to carry on with the bequest of his martyred mother.

The twinge of losing a mother, especially a “Benazir” mother is too far from one’s comprehension – life ceases, every time one begins to recall her memoirs. Every time, one heeds her name, the wounds even intensify and it’s implausible to tot up the tears. Nevertheless, when one opens the episode of the Bhutto heroism, the name of Bilawal Bhutto Zardari outshines; the same child, who fooled the President. The adversaries of democracy would have never wanted to wake up to the dawn of December 30, 2007, when the 19 year old son of Shaheed Mohtarmah Benazir Bhutto, Bilawal Bhutto Zardari pledged to persist with the mission of his beloved mother by quoting her statement: “Democracy is the best revenge”. Certainly, it is the power of the ballet – the clout of the commons, which has been the greatest strength and support to the Pakistan Peoples Party. Bilawal Bhutto, thereby, began his journey, reiterating his devotion to Shaheed Benazir Bhutto’s principles of egalitarianism, forbearance and reconciliation.

The budding Chairman of Pakistan Peoples’ Party carries the magnetism of his grandfather, Shaheed Zulfiqar Ali Bhutto. His salient similitude with him and his mother, thus make him an unparalleled leader, who completely understands the torments of the down trodden and the underprivileged of the country. Certainly, the assertion of Bilawal Bhutto Zardari as the future Zulfiqar Ali Bhutto carries an immense amount of potent, for he, Bilawal, in his name too is “one without comparison”, just like his mother, Shaheed Benazir Bhutto. His speeches are a testimony to this claim. The very first time, Bilawal addressed the party workers startled me. Had it been a dream – where did this ardour come from? Do people still have any qualms about his surname, “Bhutto” in particular? “Pakistan Peoples Party k karkun, ye duniya AP ki qurbanioo ko bhool chuki ho gi, magar hum nahi bhoolay… Bhutto kal b aap k waja say zinda tha, Bhutto aj b aap k wajah say Zinda hai…Aj sadar ap ka hai, wazeer e azam ap ka hay, may chahta hoo hukamat ap ka ho, ap sirf qurbania danai k liay nahi ho..”. It is ONLY Bilawal Bhutto Zardari, who could articulate this – whose grandfather accepted gallows but repudiated to bow before a dictator and whose mother was shot brutally, fighting for the rights of the people of Pakistan.

“This is the Pakistan Peoples Party, this is Shaheed Mohtarmah Benazir Bhutto’s party; of course, the people would expect more from us…” The young PPP Chairman, Bilawal Bhutto Zardari completely understands that he is the hope of millions of Pakistanis. Indeed, he’s never going to let them down, as he furthered “I’ve sacrificed my grandfather, I’ve sacrificed my uncles, I’ve sacrificed my mother, what more can I sacrifice…? But there is always more. Hum ko qasam Allah ki, hum ko qasam Quran ki, hum ko Shaheed Mohtarmah Benazir Bhutto k qasam, sar chahiyai sar hum daiy gay, khoon chahiyai khoon hum daiy gay, jan chahiyai jan hum daiy gay…jo faisla hota nahi, no faisla kar daiy gay hum…Ya Allah Ya Rasool, Benazir Beyqasoor”… After this, no further clarifications are required to prove him, as the true leader of the future Pakistan.

Bilawal Bhutto Zardari stands for a pluralistic and democratic Pakistan, as envisioned by his mother, Shaheed Mohtarmah Benazir Bhutto. He is an inspiration to millions, and a manifestation of Shaheed Bibi’s dreams. We all wait to see him as the Prime Minister of Pakistan and he has supporters, ready to lay down their lives for their leader, Bilawal Bhutto Zardari.

For once and for always,

Click here to post a comment
30 December 2011 is a dark day for Pakistan’s judiciary: Asma Jahangir
Reflections on the Supreme Court’s judgement on the memogate inquiry -by Zubair Torwali