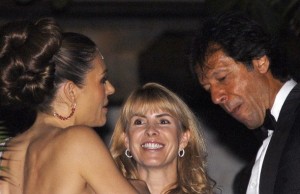 Editor’s Note: We are pleased to cross post Ali Aftab’s article from Pakistan Today.  The writer makes an important observation when he highlights how an “analyst” pointed out the tensions within the Lota-Enhanced PTI that have already emerged; tensions between the Multan heavyweights like Shah Mahmood Qureishi and Makhdoom Javed Hashmi.  The “analyst” in question is the perenial establishment right-wing Islamist mouthpiece, Haroon Rashid; a person who comes across as the establishment liason of Imran Khan.

The moral-free bandwagon of the landed elite

Landed aristocrats are by nature conservative in their political, economic, social and religious disposition. Since a change in the status quo would cause a decline in their standing, they fight any movement for change tooth and nail. They have always been the biggest obstacle in the progress of a society. For instance, England before the Bill of Rights; France before the 18th century; China before 1949; Russia before 1917; the US before Lincoln. In Pakistan the landlords, to this day, have managed to make their way into the governing bodies of all political parties because of their constituency clout.

Ashiq Husain Batalvi’s book Iqbal kay akhri do saal contains letters of Iqbal to Jinnah, in which he is clearly not happy with Jinnah for his acceptance of feudal aristocrats into the Muslim League. Iqbal insisted on promoting middle class individuals such as Malik Barkat Ali – one of only two winners from the Muslim League from Punjab in the 1937 elections. Iqbal particularly insisted that Jinnah not proceed to sign the pact with Sikandar Hayat Khan for the same reason. Jinnah paid no heed, and the rest is history.

In the1946 elections, the Muslim League relied on the landed elite for its vote bank, and ultimately we ended up with the crippled Ghulam Muhammad ruling the country and toppling prime ministers at will. After Ghulam Muhammad’s exit, the landlords characteristically continued siding with the establishment.

They backed Ayub Khan against Fatima Jinnah in the 1964 presidential elections. While the progressive leaders of the time – Bacha Khan, Mujibur Rahman, Hussain Shaheed Suhrawardi and others – supported Jinnah, she obviously stood no chance against the self-appointed field marshal. Ayub won, but Pakistan lost heavily. In 1971, we returned half of our God-given state back to God with a thank-you note.

Zulfiqar Ali Bhutto relied on the same bunch, first in 1970 and then more extensively in 1977. While Bhutto won power, these feudal lords opposed, successfully, anything that threatened to go against their interest.

Bhutto’s land reforms are a good example. While Bhutto succeeded in implementing the second wave of land reforms in 1977 against the feudal lords’ wishes, his victory was short-lived. Islam, of all things, came to the rescue. Zia overthrew Bhutto, and with Zia came the Federal Shariat Court. The land reforms were challenged, and the Shariat Appellate Bench of the Supreme Court declared the land reforms un-Islamic and therefore unconstitutional. The reforms may have temporarily clipped their wings but the infuriated landed aristocrats had had the last laugh again, with solid help from men of God and men of Justice.

The feudal lords, in the meanwhile, had of course pledged their allegiance to Zia. The Lunds, the Jatois, the Junejos were now part of Zia’s cabinet, leaving middle class leaders like Jehangir Badar to get whiplashed. In If I Am Assassinated Bhutto admits that his gravest mistake was his attempt to marry the rural elite with the urban bourgeois – an impossible union – which led to his downfall.

Fast forward to 2011, and the landed aristocrats and other traditional pro-establishment puppets are now falling over each other pledging their allegiance to the PTI. With the establishment realising that the popular political parties may be getting desperate to minimise its role in politics, and with Imran’s slogans against corruption getting popular, it was natural for the establishment to pave the way for Imran. Although the establishment is known to be very meticulous and painstaking in its ways, it is often enough for the generals to casually drop at get-togethers something like, “It seems Imran is coming into power.”

A coalition government would suit the establishment’s cause best, and so it would like the PTI to make an alliance with PML(N), something in which Imran doesn’t seem interested – at least now. PPP is not an option, and an overly depleted PML(N) would mean a very powerful Imran.

The establishment is in a sense trying to make and break the PTI at the same time. Why would the resident PTI analyst break it on live TV that Shah Mehmood didn’t want Imran to receive Javed Hashmi at the Karachi airport, but Imran did so anyway? Makes no sense, unless the analyst is more loyal to Kayani than the PTI, and the PTI’s momentum – at PML(N)’s cost – is a bit too much for even its backers. The extent of the establishment’s confusion in the coming days will be directly proportional to PML(N)’s problems.

What about Imran’s slogan of change that has so excited the masses though? The path to real change (Imran’s or anybody else’s) will have to start from good riddance to the feudal rubbish. It can be a bloody affair like China, industrially driven like England, or democratically directed the way Nehru did it in India. History suggests that to have them in your team and bring a change would be impossible. Imran apparently thinks otherwise. Good luck to him!

The writer is a member of the band Beygairat Brigade that has recently released the single Aaloo Anday.