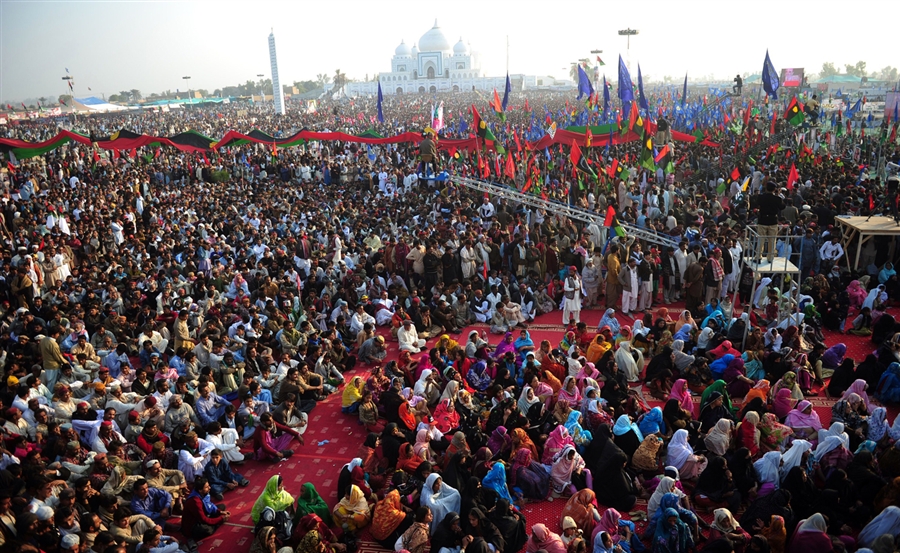 It was one of the largest shows of political strength in Pakistan’s political history after Benazir Bhutto’s arrival from exile in September 2007 (when about a million PPP workers and supporters had gathered to receive their leader at Karachi airport). On Benazir’s fourth death anniversary (27 December 2011), more than 300,000 PPP supporters gathered in Garhi Khuda Bux (Sindh) to pay tribute to their martyred leader. (Source 1, Source 2)

According to news reports, Pakistan’s president Asif Ali Zardari addressed at least 300,000 mourners at the Bhutto mausoleum in his first public speech since being treated in hospital in Dubai, brushing his illness under the carpet and delivering a veiled barb against the army and its proxies in judiciary and media. According to APP, around 500,000 people had thronged the venue, which was also reported by daily Express newspaper.

Pakistani President Asif Ali Zardari yesterday pledged to fight for democracy despite many challenges and threats to the democratic government in the country by the usual conspiracy network, Teen Jeem (3 Js), i.e., military (Jenerals), judiciary and (pro-military) journalists.

Zardari was addressing a rally outside the mausoleum of his slain wife Benazir Bhutto on her fourth death anniversary at Garhi Khuda Bakhsh, the ancestral graveyard of Bhuttos.

“Whenever we would get into fight, our style would be democratic and we would fight for democracy,” Zardari rhetorically told a large crowd in a field in front of the mausoleum.

This was Zardari’s first public appearance after he fell ill and remained under treatment in Dubai amid rumours that he might not come back home.

“But this fight would be within constitutional limits,” he said.

The president philosophically narrated his vision about the political situation in the country, that suggested that anti-democratic forces want to declare democracy as a failed system.

“It is a theatre to me. It has tried to install tailor-made democracy and there comes a voice of a dictator that the democracy has failed to deliver,” Zardari said.

In a critical reference to the Supreme Court, which is considering an investigation into a memo asking the US for help against the country’s powerful military and which could implicate Zardari, he asked about the as yet unsolved case of his wife’s assassination.

No one has yet been charged with her assassination at a huge rally outside Islamabad.

Zardari said that he has been asked why the assassins of Benazir Bhutto had not been arrested so far. He said he directed the question towards the Chief Justice of Pakistan as to why he was not taking up other important cases.
“I ask Chief Justice Ifitkhar Chaudhry as to why he can’t see the [other] pending case of Zulifqar Ali Bhutto,” he said referring to a case filed by the people to challenge a 1979 verdict, which hanged Bhutto.

“And when the time comes, we would face you directly,” he told the Supreme Court, which is hearing a case against “memogate” that accuses Zardari and former Pakistani ambassador to Washington of prompting Americans to tame the Pakistani military.

The death anniversary came the same day the Supreme Court began deliberations on whether it could open its own investigation into the so-called “memogate” scandal.

It also came two days after cricketer-turned-politician Imran Khan brought at least 100,000 people into the streets of Karachi in a rally that increases pressure the government and cements his standing as a political force. (Source)

He trained guns on the military establishment in a rhetorical way. “Asfa [his daughter] would raise the flag from where it fell in Pindi,” he dramatically narrated the killing of Benazir Bhutto in Rawalpindi, the city that houses military headquarters.

“And she would ask that you gave assurance of protecting my mother here,” Zardari added.

Political analysts believe that the current government has become weaker and is not able to tackle the challenges.
“They have been weakened and the gulf is getting more wide, I am afraid,” said Aesha Siddiqa, a leading political and defence analyst, referring to the conflicting stances of the political government against the military.

“Once they threaten the army the next day they just back off,” said Siddiqa, who foresees an early end of the government, whether constitutionally or otherwise.

Zardari also criticised media for being partial against his government in favouring cricketer-turned-politician Imran Khan, who at a rally declared Zardari as “sick”.

“Someone taunted me that I am medically out, I ask him ‘if you did not get your muscle pulled, so was mine’,” he said.
Without naming it, Zardari addressed the US, a close ally of Pakistan in war on terror, warning he would not take dictates about Pakistan’s decisions of joining any war or in trade. (Source) 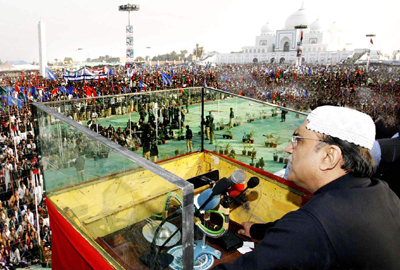