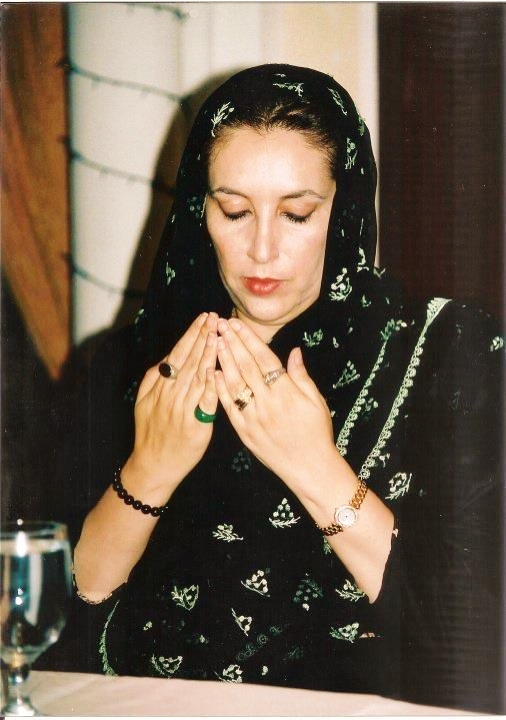 The aura of her was something most frightful for the mindset that had evolved over the later period of her lifetime – an unshapely blend of religious intolerance, jingoism, counterfeit cultural assimilation and hegemonic masculinity. She was abhorred, loathed and scorned like anything just as she was adored, esteemed and revered like a goddess. The disciples of darkness and hatred came out winners on that freezing evening of December when the beautiful blue around her body was replaced with the withered white. The tricolor, at the end of the day, served as her coffin as it had for her family and many of her people.

Pakistan was a different place after Zia-ul-haq’s eleven year long tyrannical rule. The phenomenon of radicalization of society, to the interests of handful, which had been contrived with the Objectives resolution and further substantiated by the Doctrine of Necessity shenanigan, had grown in full swing in Zia’s era. That was not only Z. A. Bhutto who paid the heavy price of breaching the sacred cloak of rogue state but the society, on the whole, underwent severe deterioration at the hands of a madman. Such was a hostile environment when BB swore in as first ever woman Prime minister of Pakistan with the words: “We gather together to celebrate freedom, to celebrate democracy, to celebrate the three most beautiful words in the English language: `”We the People.”  Soon this became evident who were the ones  entitled to call the shots when a military General, Aslam Baig, who had been conferred upon medal of Democracy by BB, was found as main perpetrator of operation Midnight Jackal – an alleged design to topple the democratic government. BB, notwithstanding, was as adamant for the supremacy of people’s rule against all odds as ever.

Dauntless and unshakeable BB never succumbed to pervaded ethos of predominant Mullah-Military mindset and always took the lead in calling out the bigotry. While on her trip to United Kingdom in 1990, Benazir Bhutto paid a visit to Dr. Abdus Salam, a Nobel laureate in Physics, where she had paid great respect to Abdus Salam. The act caused a fury of fundamentals against her and back home she was termed as Ahmadiya only for paying homage to an Ahmadiya scientist. She rebuffed comments made by Muhammad Ijaz-ul-Haq in May 2007 regarding the knighthood of Salman Rushdie, citing that he was calling for the assassination of foreign citizens. “I’m glad there was no cease-fire with the militants in the mosque because cease-fires simply embolden the militants,” She was heard saying this on Britain’s Sky TV after the Red Mosque Incident. Her undeterred stance on Lal Mosque fiasco lost her a significant support in Urban Punjab and made her a legitimate target in the eyes of bloodthirsty beasts.

BB had witnessed the horrific mayhem brought out to the society in the form of sectarian and religious antagonism by the messengers of darkness. She was well aware where the fault lines of contention lied. She dedicated last years of her life in unveiling the root cause of decline in Muslim societies in general and Pakistani society in particular – A no man’s land where the wings of intellectual and political dwarfs start burning. In her riveting and most insightful posthumous book “Reconciliation: Islam, Democracy and the West”, she candidly unraveled the quandary confronted by the Muslims. “One billion Muslims around the world seemed united in their outrage at the war in Iraq, damning the deaths of Muslims caused by U.S. military intervention without U.N. approval. But there has been little if any similar outrage against the sectarian civil war, which has led to far more casualties. Obviously and embarrassingly, Muslim leaders, masses and even intellectuals are quite comfortable criticizing outsiders for the harm inflicted on fellow Muslims, but there is deadly silence when they are confronted with Muslim-on-Muslim violence.”

BB had always maintained that this was not the society itself causative entity breeding intolerance and bigotry, but the handful of minority had hijacked the societal values to its vicious interests. She had unshakeable faith in the collective conscious of her people and never backtracked for her firm resolve. She went on publicly calling out the handfuls: “Who jin ke siwa sab kaafar heiN, Jo deen ka harf-e-akhar heiN, un jhootoN aur makaaroN se, Mazhab ke thekedaaroN se, Main bhagi huN main bhagi huN”. She was well aware of the universal truth that change, if any, had to come from within and couldn’t be imposed from outside. She had this proud relation with her soil that she had embarked upon to reclaim: “I am daughter of Indus, I am daughter of Taxila, I am an heir of this 5000 years old civilization”

BB belonged to the land of Sindhu – the land of Bhittai. The land of seven queens of Bhittai – the land of Marvi, Momal, Sassi, Noori, Sohni, Sorath, and Lila; who are valued for their bravery and courage to choose love and freedom over tyranny and oppression. In spite of succumbing to the vehement character assassination campaign run by the inventors of ‘Chaadar and Chaar-deewari” and ‘Hudood”, BB chose to stand to the misogynists who had refused to salute her for being the ‘woman’ Prime minister. BB’s was the struggle of a Muslim woman that had never been surpassed since the days BB Zainab (s.a) had delivered those historic sermons in the streets of Damascus. The skies on the land of the pure probably would never see the crowd of hundreds of thousands chanting and getting mesmerized by a woman. She recounts the day when her plane landed in Karachi in 2007: “A display of emotion by a woman in politics and government can be misconstructed as a manifestation of weakness, reinforcing stereotypes and caricatures. But as my foot touched the ground of my beloved Pakistan for the first time, I couldn’t stop tears pouring from my eyes…I felt that a huge burden, a terrible weight had been lifted from my shoulders. I was home at long last. I knew why. I knew what I had to do.”

“Tell me the stories, oh thorn-brush, Of the mighty merchants of the Indus, Of the nights and the days of the prosperous times, Are you in pain now, oh thorn-brush? Because they have departed: In protest, cease to flower. Oh thorn-brush, how old were you When the river was in full flood? Have you seen any way-farers Who could be a match of the Banjaras? True, the river has gone dry, And worthless plants have begun to flourish on the brink.” – Bhittai

Click here to post a comment
Benazir, a never-ending struggle – by Maleeha Manzoor
The AHRC appreciates the Prime Minister’s resolve to place the army under civilian rule