I have been receiving death, rape, acid throwing threats ever since I appeared in a TV show where I entered into a debate with one Mr. Zaid Hamid and challenged his immensely hawkish narrative about the genesis of Pakistan as well as so many other issues affecting general environment of violence and radicalism in the country.

Based on my starkly different point of view, some people including mr. Hamid have been openly calling me traitor, anti-Pakistan and anti-Islam. I have been denying all these baseless allegations as strongly as possible, but unfortunately most of our people who are under the awe of these bigots and hawks, seldom use their own eyes and minds. They tend to think from the minds of these self-proclaimed opinion leaders and TVangelists. I have written extensively and expressed my views about what is wrong with our country and how to tackle this avalanche of bigotry and radicalism in order to progress economically, socially and intellectually as a nation. Here I want to bring to people’s attention how I have been threatened for life and honor since last few months generally and last few days particularly.

After I wrote a series of articles on Memogate in Daily Times and openly shared my views on Twitter, about why army and ISI need to be made accountable for weakening civilian government inter alia, my social networking sites have been flooded with threats of different kinds. These threats took a new turn after i called JuD a terrorist organization on a national TV (Waqt News), the video of which has been retracted by the channel from internet.

After this program, someone wrote on my Facebook page something to the effect: Be very afraid because we will not shoot you dead, we will slit your throat and make you an example by releasing the video. The reason why I’m not sure about the wording of this message is, that the message was deleted from my page within few minutes and I could not take a screenshot.

During all these days, my parents were being approached by many and were taunted for their daughter who supposedly is ‘encouraging nudity’ in Pakistan because of her supposed support for Veena Malik who posed nude for an Indian magazine. In a TV program, Mr. Oriya Maqbool Jan even went to the extent of saying that I should go (nude) on streets if I want to. Responding to which

I clearly said that I DO NOT support nudity, but I stand for Veena Malik’s rights to make decisions about her body, and that I would stand for the same right of going nude in streets by Mr. Oriya’s sisters and daughters. 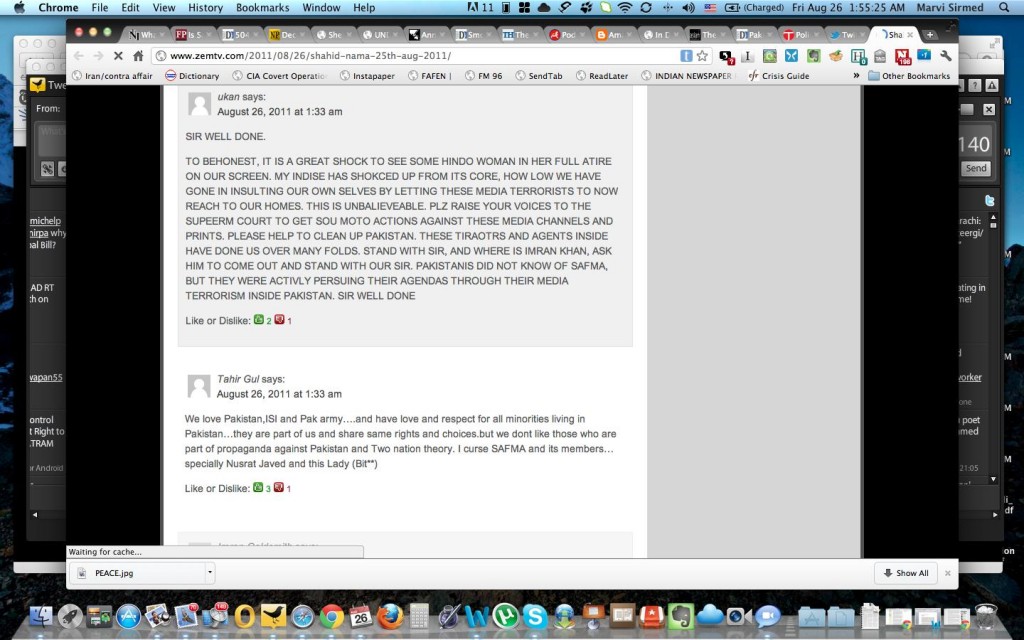 After this, Mr. Khushnood Ali Khan, Editor Daily Jinnah, wrote a complaint to PEMRA Chairman against me asking him to take action otherwise he will take whatever action he can. Chairman PEMRA instantly forwarded me Mr. Khan’s letter along with a covering letter asking me to submit my reply. While I have not submitted any reply, but I have been facing dirtiest possible abuse on social networks.

My parents were mocked to the extent that my father and brothers have disowned me publicly under this pressure and are greatly hurt by whatever is going on. My 70 years father has been subjected to immense psychological torture by these uncalled for phone calls make to him more than few dozen times.

Finally, today my father was approached through a phone call by a señior official in Punjab government whose identity my father does not want to disclose. The said official has informed my father that my life is in immense danger and that a militant organization has decided to eliminate me. My father has called back to my husband to explain to him the intensity of danger I am in.

While I don’t consider any of these developments as scary or frightening, because I firmly believe in whatever I’m doing and I firmly believe that whatever I’m doing is in longterm benefit of my country and my people, my family nevertheless is under huge stress and have strong concerns about my security. I’m not sure what happens to me once I leave this building where I am, but by this piece of writing I request the readers to kindly keep breaking the silence.

Please keep standing for civilian supremacy. You can politically support any party, but we all must understand that democracy is the only solution. I request all of you to kindly keep standing for the rights of the weakest in our country. I request you to kindly keep speaking up against the high-handedness of the deep state and their patronized mercenaries – the one’s we call ‘religious organizations’.

They have nothing to do with religion.

They are using our love for Islam against all of us and tarnishing not only Islam but Pakistan too. I request you to implicate deep state and their proteges for not only my death, but for everything that is going wrong with this country.

I don’t want to sound like a martyr, I love my life. This love for life distinguishes us from the suicide-attackers. I want to live and work. 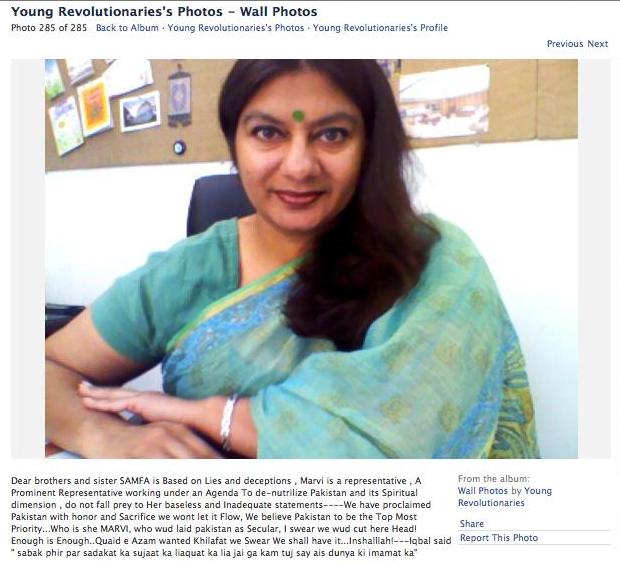 But in case I’m muted, I’m sure all of you are there to keep the candle lit. Those who are all set to extinguish this candle, must be taken to task. Let’s keep it up. I will. Till the last breath and last drop of blood in my body.