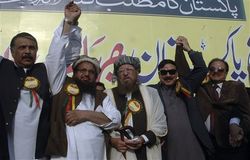 ‘Citizen safety, protetion for minorities and need for maintaining harmony’

Apropos to our historical and current events that point towards discriminatory and humiliating laws the State of Pakistan have devised by giving in to the Islamist pressure, it is an undeniable fact that despite constitutionally marginalizing our vulnerable communities and curtailing rights of all citizens in general, no citizen feels protected and secure with unchallenged armed onslaught by extremists allowed to roam freely in our neighborhoods. The Government of Pakistan had indeed declared certain sectarian/militant groups banned since 2002, however, these banned outfits continue to function in the mainstream unopposed and unchallenged. Further, they have become audacious enough to display arms in public in boastful gestures. This must also not exclude how their activities are harmful to us all in general as they are given a free hand at provoking sentiments through their calculated dissemination of hate-messages through exploitative use of loudspeakers and through written material calling for violence/Jihad against certain communities for their beliefs and religions that do not conform to their brand of Islam.

We also understand that Pakistan needs to maintain its important position in world politics, and that Pakistan has a huge responsibility to fulfill all of its international conventions on countering terrorism and also those concerning human rights situation here, and for all it to be condoned, appreciated and genuinely owned by the people of Pakistan, it is imperative for our establishment to prioritize their sincerity to citizens before defining the contentious “strategic interests” , a draconian policy historically aimed at appeasing the radical militant organizations at the cost of well-being, social harmony and economic progressiveness on equal footing for all segments of Pakistan’s populace.

We condemn this gross unjust attitude shown by our authorities for giving in to the militants as could be witnessed directly on Sunday’s so-called “Defense Rally’ at Minar e Pakistan.

Sunday witnessed the rebirth of Sipah-e-Sahaba Pakistan (SSP) as thousands of flags and weapons-waiving, SSP activists participated in the procession at Minar-e-Pakistan, contrary to the claims of Jamat-ud-dawa that the procession was aimed at discussing the ‘defence’ of Pakistan.

Not only their participation was allowed there, but seeing their presence and hijacking Minar e Pakistan, a monument that symbolized freedom for Pakistan, is an insult to the very essence of patriotism we adhere to our soil.

To explicitly cite the trouble:

A specific recurrent issue that has become a cause of our concern is the open incitement to religious violence by many groups that is openly engaged in declaring unlawful and unwarranted fatwas against our citizens. There are numerous examples to be found, like the unlawful activities of Khatm e Nubuwat religious groups. We demand that by definition of terrorism, these groups and their activities, that have not been reprimanded before should now be declared banned and contained with immediate effect. The more hate, bigotry and murder they unleash, more damaged we become as a nation.

It is undisputed that such groups are responsible to intimidate and pose direct threat to our vulnerable citizens, but also coerce other institutions, especially educational institutions, residential places, graveyards, villages etc. to expel them from mainstream. Activities as such, and the apathetic attitude of the State towards such growing extremism is our shameful reality that cannot, and should not be left ignored for long before it completely permeates our society with degenerating mindsets of our current and subsequent generations.

What can we do?

I, along with my friends invite you to join this page to express your views and also to sign it as a petition urging the government to take notice of growing extremism and vigilantism and to stress on the need to protect our minorities from these violent groups that have been let loose on us. The more we can get it signed, the better results we can get in making our case realistic. And for those of you residing in Lahore and you feel committed to this cause, please express your desire to take it forward. Your suggestions are always welcome.

I thank you for your patient reading. However, this is a matter not just of our national conscience, but of also of the future of our country.

Click here to post a comment
Benazir Bhutto: An honourable martyr – by Ravez Junejo
Joe Biden’s statement about Taliban is a death warrant for Afghan women and minorities