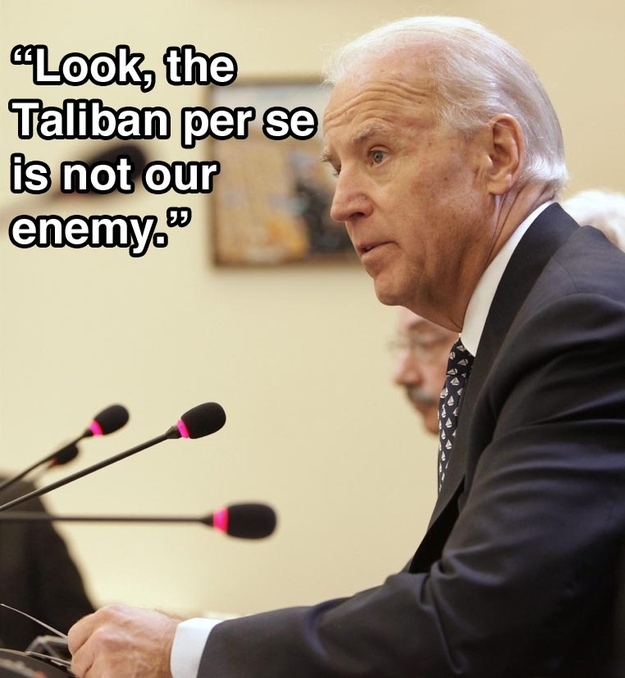 The Taliban are not an enemy of the U.S. and should not be talked about in such terms, Joe Biden has claimed. The vice-president said the militant Islamist group only represents an inherent threat if it allows Al-Qaeda to strike at the U.S.

In an interview with Newsweek, Mr Biden warned against labelling the Taliban as an enemy. He said: ‘That’s critical. There is not a single statement that the president has ever made in any of our policy assertions that the Taliban is our enemy because it threatens U.S. interests.’

Mr Biden’s comments come as senior U.S. officials prepare to negotiate a peace deal with Taliban militants. Even after a surge in U.S. troops in Afghanistan has pushed the Taliban out of much of their southern stronghold, the group’s intentions regarding peace talks remain unclear.

But a key Republican senator yesterday warned against negotiations with the Taliban.

Senator Saxby Chambliss, senior Republican on the U.S. Senate Intelligence Committee, said: ‘It sounds as if the administration has decided to negotiate with terrorists, something the United States does not do. ‘Handing over detainees, who likely continue to pose a threat to the United States, should not be the first step in building confidence.’

According to John Bolton: “So the George Aiken strategy: We’ll declare victory and get out — that is what the administration is going to do in the war on terror. Having redefined who the terrorists are and having said the Taliban is not our enemy, they’re going to say we have won and the war is over.

“They are horrible to anybody who [does not] conform to their particular ideology. Let’s be clear: When we went into Afghanistan after 9/11, it was because we had gone to Mullah Omar and the Taliban and said give us al-Qaida — and if you don’t you’ll suffer the consequences,” he said. “They refused to do it. And under the theory that I think is still correct that if you aid terrorists you are just as guilty as terrorists, we took the Taliban government down. They had allowed al-Qaida to embed throughout their administration — they were just as guilty. If they got back in power they would be base of operations for other terrorists in the future.”

Vice President Joe Biden’s comment in a Newsweek interview that “the Taliban is not the enemy per se” has ignited a firestorm. Retired firefighter Lee Ielpi, who arrived at the World Trade Center within a half hour of the second collapse on September 11, and whose son, Jonathan, also a firefighter, died in the South Tower, is among those incensed.

Lee Ielpi, a retired New York firefighter who lost his son, Jonathan, in the September 11 attack on the World Trade Center, had this to say about Biden’s remark, made in the Newsweek interview with Leslie Gelb.

I find it troubling that the vice president would make such a statement. I think that if we were to ask the many thousands of families who have lost their loved ones fighting this war in Afghanistan, I don’t think they would be pleased either. The people we’re fighting in Afghanistan are the Taliban. They supported al Qaeda. I don’t know how we can make a statement that they aren’t our enemy. They’ve killed thousands of our soldiers. Ask the families of the thousands of soldiers who have been killed and wounded whether the Taliban are our enemy.

I had the opportunity to meet well over 1,800 wounded vets who are 18, 19, 20, 21 year old, who have come back from fighting in Iraq and Afghanistan. I understand there are two issues as far as al Qaeda and the Taliban go, but I feel strongly that they’re one and the same. Their hatred for the West is quite obvious. I find it difficult to understand any difference between the two. And I’m quite confident that if we ask our wounded vets and the families of those wonderful vets who gave their lives that they would say the same, that they’re one and the same.

This rhetorical dance is true so far as it goes, but the 2001 Authorization for Use of Military Force defines the enemy as “those nations, organizations or persons [the president] determines planned, authorized, committed or aided the terrorist attacks that occurred on Sept. 11, 2001, or harbored such organizations.” The Taliban were given an opportunity to hand over the perpetrators of the Sept. 11 attacks but refused. That’s the simple fact of why America overthrew the regime, and that’s the root of the current spat with Taliban leader Mullah Omar.

This highlights the irreconcilable differences that properly define the Taliban as an enemy. Mr. Biden said if “the Taliban is able to collapse the existing government, which is cooperating with us in keeping the bad guys from being able to do damage to us, then that becomes a problem for us.” However, collapsing the existing government and re-creating the barbaric “Islamic emirate” are the only goals the Taliban have in this war. Mr. Biden cannot separate this objective from Mullah Omar’s followers by referring to them as the “Taliban per se” as though they represent an abstract philosophy or alternate-lifestyle concept. The Taliban are committed, ideologically motivated insurgents seeking to eliminate the current Afghan government and seize absolute power. Any approach to negotiating with them that doesn’t recognize that fact is doomed to fail.

As the United States and coalition forces begin to draw down troops from Afghanistan, few people would deny that a meaningful peace agreement between the Taliban and the government of President Hamid Karzai would give the world a greater peace of mind.

But the word “meaningful” is loaded with implications. Unfortunately, the already announced troop withdrawals make it much more difficult to achieve such a deal. Taliban leaders, chafing at their loss of power in Afghanistan, know they simply have to wait a bit for their chance to regain leadership.

One of the worst kept secrets in Washington these days is that the Obama administration is engaging in secret talks with Taliban leaders in hopes of laying the groundwork for peace talks between the Taliban and the Afghan government. Those preliminary negotiations were said to be at a crucial stage earlier this week, according to senior U.S. officials who spoke to Reuters. Reportedly, the United States was considering releasing some detainees from Guantanamo Bay in exchange for a similar show of good faith from the Taliban, such as a denunciation of terrorism. The administration seemed to be laying the groundwork for such a move when Vice President Joe Biden this week told Newsweek the Taliban is not an enemy.

There are a number of problems with this reasoning, however. The Taliban harbored al-Qaida because of its sympathetic ideological bent. When it ruled Afghanistan, the Taliban imposed stern moral codes that denied women basic human rights and punished men for such crimes as shaving facial hair. The Taliban may be persuaded to sever its affiliation with al-Qaida, but there is little reason to believe it would renounce its repressive core beliefs. A negotiated peace may jeopardize the hard-won progress toward some form of gender equality in Afghanistan.

A meaningful peace accord would have to include assurances from the Taliban that it would not only participate in, but respect the democratic process. This means not trying to manipulate elections and accepting results even if it loses. Such a pact would have to include an agreement to respect basic human rights for both men and women and to subordinate the Taliban’s own interpretations of Islamic law. The Afghan government would have to agree to allow Taliban representation and to include Taliban members in police and military forces.

If this sounds wildly improbable, it is. Even if such agreements were signed, trust would be a major problem. Taliban leaders may not have the ability to rein in their more radical adherents. On the other hand, it is clear that U.S. forces have no intention any longer of trying to win an unconditional surrender from its enemies in the region.

The worry is not so much that the administration is seeking to negotiate with the Taliban. It is that it might accept something less than meaningful as a victory. Sticking to an announced withdrawal timetable doesn’t help.