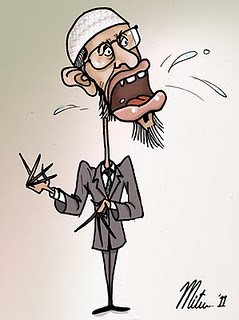 While demanding equal human rights and freedom of speech, many Islamists overlook their own intolerant and hypocritical dispositions, e.g., the non-stop wagging tongue of likes of Dr. Zakir Naik, busy belittling and criticizing other religions on his (in)famous TV channel (Peace TV).

Taking advantage of human rights ideals of several secular societies (e.g., India, North American, Europe), Islamists aver to push the limits of their liberties and supremacist claims. Whenever, authorities in secular societies take some rare measure to protect secular values, Islamists decry such action calling it a discriminatory act and contradictory to the spirit of secularism. Islamists become champions of secularism when living in a non-Muslim majority country and hate this word back home. However, this should not surprise anyone as radical Islamists are not shy to justify these double standards.

The current foremost Islamic scholar and ‘TV star’ Dr. ZakirNaik is on record audaciously defending this dualism in his interview with Dr. Shahid Masood on a TV channel, which is reproduced below:

Masood: There is a question of a Non-Muslim from India. He has asked that are Non-Muslims allowed to preach their religion and to build their place of worship in an Islamic state? If yes, then why building of Churches are not allowed in Saudi Arabia whereas Muslims are building their mosques in London and Paris?

Naik: ….. (In an Islamic state) Propagation of other religions is prohibited. Even construction of any place of worship is also prohibited. So many non-Muslims ask that when we allow Muslims to preach and build their mosques in our countries then why we are not allowed to do so in these Muslim countries? …..Similarly, as far as matters of religion are concerned we (Muslims) know for sure that only Islam is a true religion in the eyes of God. In 3:85 it is mentioned that God will never accept any religion other than Islam therefore knowing that Islam is the ONLY true religion we DO NOT ALLOW PROPAGATION OF ANY OTHER RELIGION. As far as the second question regarding building of churches or temples is concerned, how can we allow this when their religion is wrong? And when their worshiping is also wrong? Thus we will not allow such wrong things in our country.

Naik: One thing must be understood that the non-Muslims will not allow teaching 2+2=3 in their schools.as they are sure that 2+2=4. Similarly in religious matters only we know for sure that we are right – they are not sure if they have been sure then why should they have allowed wrong things to be preached? Thus in our country we can’t allow preaching other religions because we know for sure that only Islam is the right religion

Masood: Will it not be against “Human Rights”?

Naik: No it will not at all. However, if a non-Muslim likes to practice his religion in Islamic country then he can do so inside his home – but he can’t propagate his religion. It is exactly as if a teacher thinks in his mind that 2+2=3 then he has the right to do so but we can never allow such a person to teach this to our children. Non-Muslim is no doubt expert in science & technology and we invite them from Europe & USA to teach us science and technology. But in the matters of religion we are expert. They (non-Muslims) are not sure about religious truths. Thus we are trying to get them to the right path of Islam. Therefore we propagate our religion to the non-Muslims. http://www.youtube.com/watch?v=6jYUL7eBdHg&feature=player_embeded

The above mind blowing logic given by Dr. Naik is very simple i.e. ‘My rules for my house as well as yours’. The same Dr Zakir Naik, however, when banned from touring the UK due to complaints about his glorifying Osama Bin Laden and spreading an extremist message found this to be in poor contrast to what he praised as the superior secularism of India: “These western countries talk a lot, but India is more secular and more democratic than any of them. Our constitution must be the only one in the world which gives freedom of speech and also the freedom to practice and propagate religion,” Naik says, praising India for issuing special visas for public speakers and preachers. For him, this dualistic principle of ‘My rules for my house as well as yours’was to be upheld without any blushing at the contradictions of his approach.

Ironically, same Dr. Naik took a complete U-turn when the same question was asked by a British student during his video lecture at the Oxford University:

The above episode is a glaring example of how some Islamists hypocritically tailor their message according to their audience. This characteristic is also found in some politicians such as Imran Khan who remain consistently pro-Jamaat Islami and pro-Taliban on the domestic politics front in Pakistan but present themselves as secular and liberal in front of a Western audience.

Another famous Islamic scholar Dr. Israr Ahmed talks about this dualistic principle, which, although he recognizes it as a bitter pill to swallow, he counsels his followers to uphold courageously:

“What will be the status of non-Muslims?….. Non-Muslims will be protected minority. They will not be equal citizens. If you wish to call it, you can call it second-grade citizens, I don’t object.…..We have to take these bitter pills because this is exactly what Islam requires from us. We must have the courage to announce these principles without hesitation.”

As regards to those he regards as heretical sects like the Ahmadiyya he not only wishes for them to be disallowed from preaching their religious message but he goes further than that and incites his followers to kill them:

“….then the parliament decided that they (Ahmedis) are non-Muslims. But this decision is incomplete! Please note it down. I am admitting for the first time that Ahmadiyyat has not been harmed at all by declaring them non-Muslims. …..However, even in the country they could have been rooted out only if the apostates / renegades would have been killed. There is “capital punishment” for the apostates in Islam”. (Video of this speech is available on Youtube‘Mullah World Order – Islam as understood by Extremist Mullah’).

The views of Dr. Naik and Israr Ahmed are consistent with those of other modern times Islamic scholars who remain deeply prejudiced and violent towards not only other religions (Christianity, Judaism, Hinduism etc) but also towards other sects of Islam (e.g., Sufi or Barelvi Muslims, Shia Muslims, Ahmadi Muslims etc).

Islamists such as Zakir Naik, Israr Ahmed, Farhat Hashmi, Taqi Usmani and dozens of their clones and disciples not only bring a bad name to Islam by misinterpreting and misrepresenting the Quranic message of peace, non-compulsion and reconciliation but also help in creating a creed of brainwashed bigots, some of whom are ultimately recruited by Al Qaeda, Taliban, Sipah-e-Sahaba, Lashkar-e-Jhangvi, Ikhwan and Jamaat-e-Islami to conduct terrorist activities.

Posted by Let Us Build Pakistan on Sunday, August 2, 2015

It is high time that governments, not only in Muslim majority countries, but also in non-Muslim countries put a ban on the refined hate speech (including hate TV channels and other media) by Zakir Naik and others of his ilk.