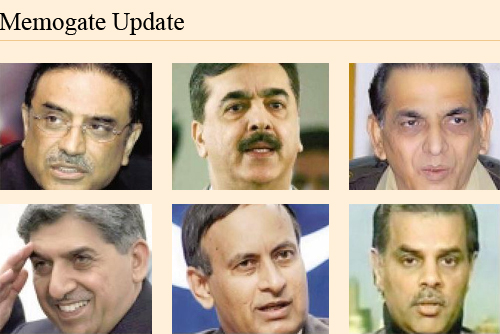 1. In view of the reasons stated in the order dated 1.12.2011 and in compliance with the said orders passed by this Honorable Court, the statement is being submitted herein;

2. A story written by Mr Mansoor Ejaz was carried by the Financial Times on 10th October 2011, alleging that a Memo had been sent to the authorities in the US Government by a Pakistani official. This story was picked up by our local media involving lot of speculative reporting. With the passage of time, more details surfaced.

3. Foreign Office Spokesperson and the Spokesperson of the Presidency formally denied the story on 28 October and 29 October respectively.

4. On 24th October Director General Inter Services Intelligence (DG ISI) briefed me on the issue and his meeting with Mr Mansoor Ejaz in London. In his opinion, there was sufficient material available on the existence of the Memo and that it had been passed to Admiral Mike Mullen (ex US CJSC). He also opined that the evidence shown to him by Mr Mansoor Ejaz was enough to establish that Mr Mansoor Ejaz remained in touch with Mr Hussain Haqqani from 9 May 11 onwards and exchanged numerous text messages and telephone calls. As per DGISI’s assessment, the sequence and contents of text messages and telephone calls created a reasonable doubt regarding Mr Hussain Haqqani’s association with the Memo.

5. On 8th November 11, Admiral Mike Mullen made it known through his Spokesperson that he did not remember having received such a Memo. However within few days he acknowledged having received it. On 21st November 11, ex National Security Advisor (NSA) of United States, General James Jones, also confirmed having passed the Memo to Admiral Mike Mullen that he had received from Mr Mansoor Ejaz.

7. On 15 November 11, the President asked the Respondent for a meeting, I met him at the Presidency at 1400 hours. The Prime Minister had already informed the President of my recommendations. The President told me that it had already been decided to call Mr Hussain Haqqani for a briefing.

8. On 16 November 11, another meeting was held between the Respondent, the President and the Prime Minister. Therein, it was decided that Mr Hussain Haqqani should come to Islamabad as early as possible.

10. As stated in Paragraph 5 above, there is nothing denying the fact that tile Memo exists and it is also admitted to have been delivered and received by (the US authorities. Therefore, there may be a need to fully examine the facts and circumstances leading to tile conception and issuance of tile Memo.

11. That the Memo episode has an impact on national security inter-alia unsuccessfully attempts to lower the morale of Pakistan Army whose young officers and soldiers are laying down their lives for the security and defence of territorial integrity and political independence and sovereignty of Pakistan. Nonetheless, Pakistan Army is in high spirits and fully’ determined to defend its homeland, against all challenges.

Statement on behalf of respondent no 7 in compliance with orders dated 1.12.2001 passed by the honorable court.

1. Respondent no 7 has not received any petition till now. However, in compliance with the orders of the Honorable Court dated 1.12.2011 reply is submitted herein;

2. Media Wing of the ISI brought to my notice the piece published in the Financial Times on the 10th of October 2011. It was written by one Mr Mansoor Ejaz. The writer had, in this article, criticized the ISl’s role and suggested some actions against the Organization. This was usual anti ISI rhetoric.

3. But I did find the opening paragraph of this piece to be quite unusual -and damaging, it mentioned that a senior Pakistani official had been attempting to pass on a message to senior US leaders indicating imminence of a military takeover in Pakistan. The whole thing looked Intriguing. I concluded that no one could write such a piece so blatantly unless he had some evidence to support his assertions. I, therefore, asked my sources to know about Mr Mansoor Ijaz and find out if he would agree to share the Information about the purported Memorandum.

4. It was confirmed to me by my sources that Mr Mansoor ljaz was ready to share the Information but only with the Director General and also not in US or Pakistan. He insisted that the meeting shall be without any aides on both sides. Accordingly, a meeting was thus planned and took place in London on 22nd of October 2011.

5. Mr Mansoor Ijaz briefed me that our Ambassador in Washington had gotten in touch with him and remained in communication about the contents and delivery of Memo to the relevant US Authorities. He also showed me the proof of a large number of messages sent through Black Berry which had been exchanged between our Ambassador in Washington and him regarding the document, which later came to be known as the Memorandum. He explained to me in fair amount of details about the circumstances leading to the drafting of Memo and why it was delivered through him. I told him, that I could not believe him unless I saw his Black Berry and Computer myself to form an opinion that the messages were really exchanged between the two individuals. Having seen these means of communication used I was satisfied that he had enough corroborative material to prove his version of the incident. He insisted that he will present the details of the evidence himself before a commission or a court of law, if asked to do so.

6. I left London the next evening and reported my findings verbally to the Chief of Army Staff on 24th October 2011.

7. I met the Honorable President of Pakistan on 18”‘ of November 2011 when this matter also came under discussion and I briefed him on what, according to my assessment, the facts wore. I also suggested to him that the issue pertained to National Security and should not be taken lightly. I suggested to the President that it will be in the fitness of things to ask our Ambassador in Washington to verify or contradict the matter.

8. The Respondent has the honor to lead ISI, an organization that stands in the forefront, particularly during the peace time, to safeguard the security of the Country as well as the honor and respect of its people. Men and women under command of the Respondent continue to risk their lives and those of their children to positively contribute to the overall security calculus of the Country. All our efforts are geared towards that end.

9. The Respondent, in his humble personal capacity, maintains that access to unadulterated truth and justice is a right of the people of Pakistan, the real sovereign masters of this Country. To this end, Honorable’ Court may if deemed appropriate, graciously consider the following. (a)May kindly summon Mr Mansoor ljaz to appear before the Honorable Court as he alone holds the real evidence, as claimed by him. He has already, at a number of occasions, indicated his willingness to de so, through the print and electronic media. (b)May kindly demand forensic examination of the computers and all the cell phones and Black Berry Telephones used since May 2011 till date by tire both, Mr Mansoor ljaz and our Ex Ambassador to the US.

Replies of Foreign and Interior Ministries

IN THE SUPREME COURT OFPAKISTAN
(Original Jurisdiction)
CM no———- 2011
Constitution petition no 77/2011
Watan party petitioner
Federation of Pakistan VS respondents.
REPLY ON BEHALF OF RESPONDENTS NO 1 &2

That tile petition primarily refers to events published/reported in the different sections of Media starting from the publication of an article written by Mr. Mansoor ljaz respondent on 10.10.2011 in the Financial Times, copy whereof has been appended with all the petitions and then followed by publications of various statements made by the said respondent and documents released by him as also the varying statements attributed to former CJSC USA. The petition also contains the expression of individual apprehensions of the petitioners.

That, said matters prime facie are not a proper subject matter of proceedings within the meaning and scope of Article 184 of the Constitution of the Islamic Republic of Pakistan.

1. It may be mentioned here that with reference to the same source (Mansoor Ijaz Respondent) The Daily Independent, UK dated 13th December, 2011 has carried a story titled, “Pakistan’s “Memo gate”: Was there ever going to be a coup?” An internet downloaded copy of the same is annexed-A.

3. The without prejudice to the foregoing submission, it is submitted that appropriate steps had already been taken competent authorities both on the Executive side as well Parliamentary forum.

4. That it is a matter of record that the former ambassador of Pakistan to USA has put in resignation on file call of the Chief Executive and its acceptance has been notified. The Parliamentary Committee on National Security, has taken cognizance and is seized of the matter.

5. That needless to state that the said Committee is fully empowered to not only probe into the matter, record evidence but also to ensure production of such evidence as it deems necessary and for this purpose all the Powers of a Civil Court are available to the Committee.

6. That it may be added that all the Committee of the parliament are creation of Rules framed under the Constitution of Islamic Republic of Pakistan in 1973. The Federal Government had already given directions to all concerned to assist the said Committee in any manner it deems fit and proper. All democratically elected political parties are represented in the said Committee. It is therefore; essential that the said Committee should proceed, with the probe to determine the issue and give its recommendations so that the parliament which has supremacy under the Constitution as a representative body of the people of Pakistan may consider and take appropriate actions and steps, if need be.

7. That it is the firm belief and resolve of the present democratic Government to safeguard, defend and protect the national integrity sovereignty on all fronts and this resolve is manifested through the sacrifices made by the coalition partners in ‘the’ government including the ultimate sacrifice of Shaheed Mohtarma Banzir Bhutto.

It is, therefore, prayed that the petition be dismissed.