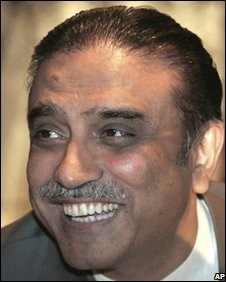 The military eliminated all Bhuttos because Zulfiqar Ali Bhutto, Benazir Bhutto, Murtaza and Shah Nawaz Bhutto did not accept dictation but Asif Zardari, a non-Bhutto, is no different than Bhuttos and this is the reason of generals’ annoyance with Zardari.

Generals are desperate to remove President Zardari through the Supreme Court as they believe that independent civilians cannot govern the land of the pure.

The military is after President Asif Zardari’s head because in him generals see a challenger. They want to punish the President because he is not a puppet. The military’s indignation at Zardari is rooted in the paranoia that only the military can save Pakistan and also it is the sole right of generals to set the contours of Pakistan’s foreign and defence policies.

Devious military minds have played the Imran Card to blackmail the opposition leader Nawaz Sharif. As expected the Sharif brothers panicked after leaks that the military was behind Imran Khan and that Khan would hurt Muslim League (N) vote bank, particularly in the Punjab Province.

Nawaz Sharif and generals have common masters. They take their cues from Saudi Arabia. Saudi royals provide ideological sanctity plus free oil and money. The United States is the Godfather of Saudi royals and Pakistani generals. Actually, Pakistan is part of an international strategic and security system that has been built to protect the U.S. interests in the region. The U.S. led alliance is a deadly web of multiple purposes and missions.

In the 1980s, Washington, Riyadh and Rawalpindi fought against the Soviet Union together but within that alliance all the three pursued different agendas. Even today, the United States and Saudi Arabia are using Al-Qaeda extremists in Syria and Libya and also against Iran. There could be links between some American figures and terrorist groups which operate in western China, Russian Caucasus region and Central Asian states. At the same time militant groups are targeting the U.S. in Afghanistan. It is a very complicated situation in which the U.S. Pakistan and Saudi Arabia are allies and foes.

Zulfiqar Ali Bhutto was a visionary, he would never let Pakistan to be used as a proxy therefore he was killed. Benazir Bhutto feared Americans, Saudis and Pakistani generals but she did not accept their dictation. Eventually she was killed, too.

Nawaz Sharif has been a product of the U.S., Saudi and Pakistani axis. Though he was a manufactured leader at one point he tried to be in control but failed and his Saudi masters came to his rescue. Nawaz Sharif was annoyed as he considered the GHQ his constituency but felt that his own camp had betrayed him. However, now it appears that generals have successfully twisted Nawaz Sharif’s arm by using Imran as a threat.

Pakistani generals do not forgive politicians who do not follow the military line. The military made an example of Zulfiqar Ali Bhutto for pursuing independent policies. Muhammad Khan Junejo was punished when he disagreed with generals over Afghanistan. Benazir Bhutto was declared a security risk because she had opened negotiations with India and had invited the Indian Prime Minister Rajiv Ghandi to Pakistan.

The military’s own man Nawaz Sharif realized that Pakistan’s survival depends on peace with India and when he was about to achieve peace with India, his generals stabbed him in the back.

President Zardari is an enemy because he, too, has been trying to readjust Pakistan’s foreign policy. Unlike Nawaz Sharif, Asif Zardari is an outsider so were Z.A. Bhutto and Benazir Bhutto.

There are interesting similarities in circumstances in which Z.A. Bhutto and Asif Ali Zardari took the so-called power in Pakistan. Bhutto was invited to take charge when generals had lost half of the country. Since the military was weak and defeated, Bhutto used the opportunity to fix problems and build institutions. He performed miracles in his very brief tenure. Under his leadership Pakistan attained international recognition, the country got its first constitution and there was reconstruction and reorganization in all spheres. Whatever post independence legal and institutional setup Pakistan has, it was initiated and launched by Bhutto. But generals didn’t give Bhutto time to further establish civil rule in Pakistan.

Asif Zardari became President when Benazir was murdered and the military was in a defensive position. Generals were relieved after Benazir’s elimination and took Asif Zardari for granted. They underestimated Zardari and thought that they would use him but he surprised them.

Zardari is far more intelligent than other politicians. He possesses unique and extraordinary leadership skills and qualities. He is non-confrontational and can be flexible without compromising on his principles and agenda. He adopts and adjusts to changing circumstances. Also he is an extremely patient person.

Following his election as the President his strategy has been brilliant. He avoided limelight and didn’t take credit for his achievements. He willingly gave up presidential powers and ignored his enemies’ attacks. His choice of Prime Minister was a good one. He and Gillani made an excellent team and it puzzled many of their opponents.

By keeping a low profile Asif Zardari undertook a very delicate and extraordinary task of steering Pakistan out of crisis. He gave the military the freedom to deal directly with their masters in Washington and Riyadh. The military has been setting the terms of war on terror and related security issues.

President Zardari, on the other hand, embarked on a different course. He started building bridges with regional players. He visited China half a dozen times and his efforts have given new impetus to Pakistan-China relations. He has been actively working on opening trade and energy routes between Central Asia and Pakistan and trade links between India and the latter.

Never before a Pakistani leader pursued relations with Russia and Central Asian states with such vigour. Under Zardari Pakistan has signed landmark bilateral agreements with Russia and Central Asia. Despite pressure from the United States and Saudi Arabia, Zardari established deeper and concrete relations with Iran and he enjoys the trust of the Iranian leadership. President Zardari’s master stroke, however, was declaring India as Pakistan’s most favourite trading partner.

Indeed President Zardari has laid foundations for a new foreign policy; this has earned him many powerful internal and external enemies. The President’s foreign policy initiatives have alarmed the GHQ and its godfathers in Riyadh and Washington.

While the President was busy in synthesizing a new role and image of Pakistan, generals continued their games of deception. General Zia-ul-Haq started playing double game in the so-called Afghan Jihad, General Parvez Musharraf followed General Zia’s path in the so-called ‘war on terror’. That tradition continues as the current Army Chief, General Ashfaq Parvez Kayani, and several of his associates were part of General Musharraf’s team.

Some Pakistani generals allowed U.S. drone attacks and at the same time protected and encouraged the Taliban. They were fighting the war on terror but also provided shelter to Osama Bin Laden. They never bothered to seek permission or even inform civilian governments of their acts. Generals’ wisdom has caused irrecoverable damage to Pakistan.

Now Pakistan is isolated and condemned due to the foolish policies of its generals. The world sees Pakistan as a rough state because of its military. In fact, the military is responsible for the decay and destruction of Pakistan and yet generals jealously guard their control over the country and are incapable to think introspectively.

Pakistani generals were responsible for the breakup of the country in 1971. Because of them Pakistan is at perpetual war with India, generals have dragged the country into the Afghan quagmire, the menaces of extremism and sectarianism polluted the Pakistani society during military rules.

From the standpoint of the Pakistani military, to be a patriotic Pakistani means having a firm and unconditional belief in the military’s religious and nationalistic perspective. The Pakistani military has illusions about Pakistan’s place in the world. Pakistan’s Westernized, whisky drinking and English speaking generals have a worldview that is flawed and outdated; the trouble is that they do not realize it.

During the last 30 years, an ill-conceived Islamization process has poisoned many military minds and it is reflected in their perceptions of nationalism and patriotism. The military thinking is rooted in distorted and inflated historical claims about Muslims’ glory and false narratives of Islamic history.

The military’s incapacity to shed its illusions and insane concepts is Pakistan’s major problem. However, generals are not completely idiots. Keeping Pakistanis sunk in the ocean of confusions, illusions and misconceptions could be a calculated strategy that aims to protect military’s financial interests and political hegemony.

One part of the military sponsored spread of ignorance in Pakistan is deliberate with the strategic goal of maintaining control. The other aspect of this mindset, however, is ideological and is based on a misplaced racial and spiritual superiority complex.

The military’s ideological foundations stem from the notion of Islamic Renaissance and revival of the ‘Muslim glory’.

The military uses selective works of a philosopher and poet Sir Muhammad Iqbal and his vision of Muslims’ uplift and advancement. Iqbal was a great intellectual but many of his ideas related to Islam are confused and contradictory. He is also misrepresented and misunderstood in Pakistan.

Since the 1960s, the Jamaat-e-Islami (JI) has been making inroads in the ranks of Pakistan’s military. Before the 1971 war with India, the military and JI made an alliance that killed hundreds and thousands of Bengalis in the East Pakistan. From there on, the JI became a civilian regiment of the Pakistan military. By the 1980s, Mulanna Mudoodi, the founder of Jamaat-e-Islami, had become an ideological role model for many senior and junior officers of the Pakistani military.

The JI is another face of Al-Qaeda. If Jamaat-e-Islami is a tree, groups such as Al-Qaeda, Jamat ul Dawah, Lashker Jhangvi and dozens of others in Pakistan as well as Egyptian Muslim brotherhood are its branches. Therefore it is fair to say that for the last 30 years there is ideological conformity between extremists and some in the Pakistani military. However, the good sign is that now the military has learnt hard lessons and there is a growing  realization within its ranks about the negative effects of hard-line and extremist policies. Extremism needs to be purged completely from the military minds.

But Pakistan’s troubles will end with the end of the military’s domination in politics. Generals must give time to civilian leadership. The country needs a new start, a new set of rules and a new civil-military partnership where the military and the civil society are not at odds but stand shoulder to shoulder and defend and define Pakistan with one voice. A change in the military mindset is prerequisite for such a change.