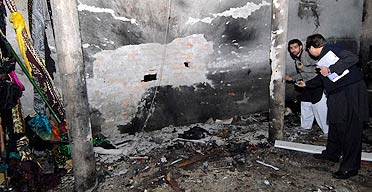 Related posts: If they burn a Quran, they’re evil

Here is a documentary proof of how Shia Muslims in Pakistan are routinely harassed, persecuted and killed by the Saudi-ISI supported Jihado-sectarian monsters.

In the following exclusive video, dozens of Lashkar-e-Jhangvi (LeJ aka Sipah-e-Sahaba Pakistan SSP) extremists are seen attacking a Shia mosque (imambargah), putting the mosque on fire, chanting slogans against Shia Muslims, declaring them kafir, i.e. infidel, and cursing them.

The above desecration of the Shia mosque and black-paint on Imam Hussain’s name by LeJ-SSP terrorists under police protection reminds us of a similar desecration of an Ahmadi mosque in Punjab a few years ago in which the police used black-paint to hide the Kalma Tayyaba (most sacred text in Islam) under the influence of Saudi-Wahhabi-LeJ mullahs.

Here’s a brief context of the LeJ’s attack on Peshawar’s Shia mosque:

Hate speech against Shia Muslims is commonplace in Pakistani society, media, mosques and madrassahs, a project which is amply supported by Saudi Wahhabis and Pakistan’s radicalized Deobandis who consider Shia Muslims as heretics, polytheists, deviants of Islam, and agents of Jews.

Recently (on 6 December 2011), BBC published an article titled ‘A year of suffering for Pakistan’s Shias’ to highlight the ongoing Shia massacres in Pakistan, which are most of the time ignored or misrepresented by Pakistani and international media.

In Pakistan, LeJ is the most violent Deobandi organization against Shia Muslims. Affiliated with the Taliban and Al Qaeda, LeJ (aks SSP) has killed thousands of Shias, Barelvis, Christians and Ahmadis in the last two decades.

In this particular incident in Peshawar, a Shia mosque (Imam Bargah Dar-e-Abbas, situated at Kochi Bazar, Peshawar) was attacked by LeJ-SSP operatives on 21 November 2011. Given the ongoing target killings of Shias by LeJ-Taliban terrorists, Shias at the Peshawar mosque were ready to foil the attack. Two LeJ terrorists namely Ghulam Farooq and Hasan Muavia Raza were killed by the custodians of the Shia mosque.

The aim of the LeJ attackers was to stop Shia Muslims from their annual Ashura rituals (mourning of Imam Hussain) during Muharram. Not unlike Professor Saleem Ali of University of Vermont, LeJ operatives consider Shia rituals of Ashura as a disgusting deviation from the original, pure Islam.

According to daily The News:

A police official said the clash erupted when Ghulam Farooq objected to fixing of a Sabeel (water tank) in front of the main entrance to his house by the members of the Shia community of the nearby Imambargah ahead of Muharram.

Given that LeJ is supported by Pakistan’s military establishment, ISI in particular, the Peshawar police did not use the opportunity to track other LeJ terrorists involved in the attack and arrest the entire racket. If the police would have done that, probably a subsequent, more gruesome attack on Shia Muslims in Afghanistan by the LeJ terrorists could have been thwarted. (On 6 December 2011, two terrorists killed more than 60 Shia Muslims in Kabul and Mazar-e-Sharif who were marking a major Islamic holy day (Ashura). Pakistan-based group, Lashkar-e-Jhangvi (LEJ), claimed responsibility for the attack. LeJ represents a radicalized Deobandi Sunni group which is known to be supported by Saudi Arabia and Pakistan’s spy agency (ISI).)

In Peshawar, the LeJ-SSP affiliates and their Taliban and Wahhabi sympathizers used the opportunity to present and mourn the death of two LeJ terrorists as a matter of great sacrifice in the path of pure, original Islam. Under the protection of the Peshawar Police, LeJ affiliates utilized the incident and assembled near the Shia mosque (Imam Bargah Dar-e-Abbas) after the incident; a crowd of 300 terrorists rushed to the Shia mosque, and torched the Shia holy flag (Alam-e-Hazrat Abbas) and other holy objects and books in the Imam Bargah. The attackers also desecrated the name of Imam Hussain which is equally sacred to Shia Muslims and Sunni Muslims (except the Kharijites).

On the instruction of LeJ/SSP’s head Muhammad Ahmad Ludhianvi, a police report (FIR) was registered against the Shia Muslims who had legitimately defended themselves and acted against the LeJ attackers. The custodian of the Shia mosque Mohammad Hussaini and his two sons Mohammad Askar Hussaini and Mohammad Mohsin Hussaini were arrested by the police and are still in prison.

The entire incident is an evidence of the following:

1. Stereotyping, cursing, harassing of Shia Muslims is a common feature of Pakistani society, where the majority of moderate Sunni Muslims (Sufis-Barelvis) seem to be hostage to a powerful Deobandi-Wahhabi minority;
2. Shia Muslims are routinely attacked and killed, their Shia Islamic rituals are subject to hate speech and violence;
3. Pakistani State has failed to protect Shia Muslims as equal citizens of the country;
4. Pakistani Sate, ISI, judiciary and police, appear to be favouring and supporting the LeJ terrorists instead of helping and protecting the target killed groups (Shias, Ahamdis, Christians etc).

Update: On 12 December 2011, LeJ terrorists in Peshawar gunned down a Shia Muslim, Syed Mehmood Jaffari. Syed Mehmood-ul-Hassan Jaffari, son of Syed Mir Hassan Shah, was gunned down by the terrorists outside his shop situated at Tauheedabad Wazir Bagh Road, Peshawar. Of course, there was no chanting of Kafir Kafir, Deobandi Kafir, Kafir Kafir Wahhabi Kafir at his funeral, nor a Deobandi or Wahhabi mosque was attacked by mourning Shias. And of course, no LeJ terrorist has been arrested by the police.

To the media persons and social activists currently masking or misrepresenting Shia target killings in Pakistan, we have this to say:

There is no equation of violence between a target killed community and its State-backed killers.

False neutrality does not help the cause of reconciliation when a community (Shia Muslims) is subject to an ongoing and systematioc stereotyping, othering, harassment and target killing!

You don’t have the right to keep misrepresenting Shia massacres in Pakistan: A comment on HRCP 2010 Report
https://lubpak.net/archives/65545

Click here to post a comment
On Najam Sethi’s Punjabi ethnocentric, pro-establishment propaganda
Bruce Riedel on Kargil — Why the PPP govt had not moved the courts to try Mian Sahiban? -by Taj Haider