In order to successfully carry out the fraudulent scheme of an election manipulation (pre poll and post poll), Pakistan Tehreek e Insaf’s Kaptaan is planning to gain support of the international establishment, with national establishment’s ‘trump card’ already in his pocket.

Talking during his talk show, Aapas Ki Baat, Najam Sethi indicates that Imran Khan and his new deputy Shah Mahmood Qureshi will go to Washington, D.C. to meet with Congress members to try to get their support in upcoming election. The proposed meetings could be the big support getter from the world’s biggest power; the main purpose of these meetings with high US officials is to dispel the impression that the PTI is an anti-US and pro Taliban party.

The PTI chief took double standards to a new low, when at a recent meeting with the US ambassador, he indicated that his party would be ‘absolutely comfortable’ working with the US on all issues, including the war on terror, since both countries have strong mutual interests.

We see this as a convenient, opportunist shift in the PTI’s policy stance. As the election is approaching, Kaptaan the new darling of Pakistan’s military establishment is trying to fix the match with the US by presenting a soft stance towards it.

The historical context and political philosophy of PTI: Since its inception, the party has radical religious overtones with very critical of the US role in Pakistan and the participants of it’s rallies have been carrying national flags, banners, play cards inscribed with ‘Amreeka ka jo yar hai ghdaar hai ghadaar hai’. During the visit of George W. Bush to Pakistan in 2006, Imran was the only politician to attempt to hold a rally against his visit. And his party had demanded public execution of Raymond Davis. Throughout the PPP led government’s period in office, he has criticised the government for maintaining unholy alliance with the US & called to walk away from the “war on terror”. He always held US responsible for spread of terrorism and for the deteriorated law and order across the country, not the terrorists organizations. Thus, he attracted the attention of the right wing extremist lobby through anti-Americanism. But now his stance on the status of the US as a world’s biggest terrorist began to change.

The pre and post poll rigging, formation of Pakistan peoples Party Parliamentarians Patriots (PPPPP) and the former head of ISI’s political cell General Ehtisham Zamir’s role, all of that is still fresh in our memories. How can we forget the creation of Pakistan Muslim League(Q), Muttahida Majlis-e-Amal(MMA), the King’s political party and religious alliance formed in 2001 by former Gen. Pervez Musharraf.

Now the same establishment is once again playing the same game, though player is new yet technique is many generations old. History is repeating itself once again and just like old king’s party the PTI is accepting all those well known characterless turn-coats and opportunists from other political parties including those belonging to PPP, PML-N, PML-Q and former staunch supporters of General Pervez Musharraf. The future of Kaptaan’s new so-called ‘Tsunami’ will not be different from the past establishment supported parties and alliances, like IJI, MMA and Millat Party.

However, various reports reveal that entry of ‘turncoats’ has disappointed sincere PTI workers and leaders as they fear that induction of ‘opportunists’ would dent the popularity of the party among people, particularly the youths, who want a real and positive change in the country. The reports also suggest that the powerful establishment is backing Imran Khan’s recent campaign and encouraging the patent lotas (opportunists) to join the PTI, so they are jumping on the establishment’s new bandwagon for the allotment of tickets.

In the new political scenario, our experienced manipulators are not only encouraging turncoats to join the new bandwagon but also trying to fix Imran’s meetings with the foreign players.

Meanwhile, for his domestic supporters who represent the right wing club, Imran Khan is promising to bring a medieval political system like Khilafat-e-Rashida in Pakistan. 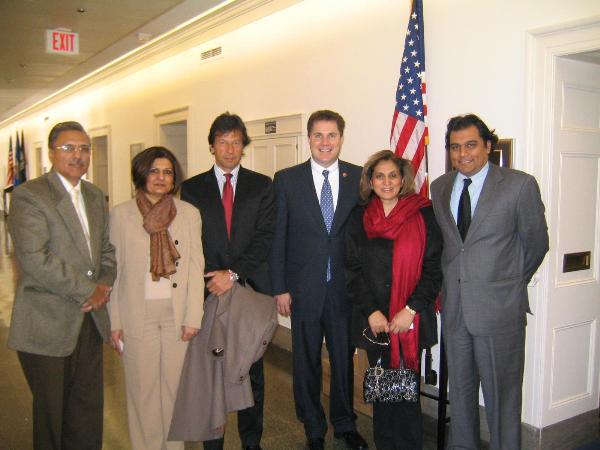 Kaptaan’s political recipe for foreign audience is different from other local religious recipes we listen, watch and read on local media. His foreign recipe does have liberal, secular and parliamentary ingredients. In a recent interview with the BBC, Imran said that he was a liberal and did not support the religious extremist groups/terrorists. However, on ground PTI prefers to make political alliance with religious political parties particularly Jamat-e-Islami, while opposing liberal democratic parties. Is it self-contradictory or political convenience?