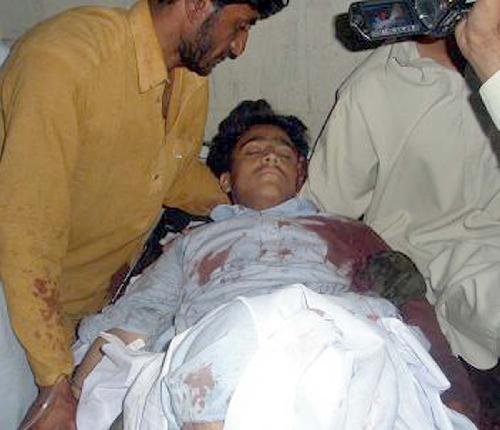 An injured student is treated at a hospital after a blast in Khuzdar, southwestern Pakistan, on March 2, 2010. Source: Xinhua

Once again, Pakistani media has almost blacked out an act of violence by Taliban extremists. This time the Taliban’s target was a Baloch cultural day and musical concert in the University of Engineering and Technology, Khuzdar. The blast occurred in the premises of local engineering university when a number of students and other people were attending a cultural gathering. Two innocent students were killed, numerous others were injured.

Contrast the almost negligible coverage to the Khuzdar attack with the enormous coverage given to the attack on the International Islamic University, Islamabad.

The reason for this disparity in media approach is quite clear. In the International Islamic University case, there was a powerful lobby of Islamist students (Islami Jamiat-e-Talaba) who have direct links with the Pakistani media. In the Khuzdar Engineering University case, it were poor Baloch students who were on the receiving end, hence not worthy of any support or coverage in the mass media.

Does Balochistan exist in Pakistan? Are Baloch people entitled to same rights as are granted to the people of Lahore and Islamabad? Will Hamid Mirs, Talat Hussains, Shahid Masoods and Javed Chaudhries of the Pakistani media pay some attention to this gruesome attack by Islamists on a musical concert in a far flung town in Balochistan?

Here are some relevant news items:

QUETTA: Two students of Khuzdar Engineering University were killed and nine others injured when a bomb exploded on the university premises on Tuesday night.

Khuzdar DIG Asif Ejaz Sheikh said the cause of the blast was being investigated. Police and security personnel took the bodies and the injured to the Khuzdar civil hospital. Sources said two of the injured were in a serious condition. One of the deceased was identified as Junaid Baloch, a son of a university official. — Saleem Shahid

There was no claim for responsibility, but local security officials linked the incident to violent rivalry between two clans in the tribal area.
Pakistan has also seen a growth in religious conservatism in parts of the northwest and Baluchistan, which borders Afghanistan and Iran, with militants opposing music and films and instead advocating Islamic education.

However, according to Baloch nationalists, the attack was carried out by Pakistan Army (or the Taliban-ISI duo?).

Khuzdar: B.S.O Azaad Media Cell has reported that Baloch Students Organisation (Azaad) and Baloch Culture Forum were observing the International Cultural day in Khuzdar Engineering University. When the personal of Pakistan FC (frontier corps) hurled three hand grenades on the crowd. Speaking to Radio Gwank a Baloch student has said that more than 18 youth have sustained injuries including a teacher Mr Jalal Shah and some senior BSO (A) leaders. According to Radio Gwank report the FC has surrounded the University after the attack. The injured have been shifted to Hospital and many youth were heading to the hospital to donate blood to their injured comrades.

In which 3 got serious injuries & Sent to Karachi for Better Treatment..

Blood needed for the Above Injuried .. We Appeal TO BALOCH Nation to Donate Blood to their Beloved Brothers..