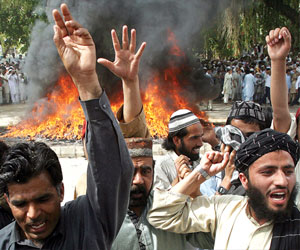 In my opinion the word extremist has been too narrowly defined. Extremists are not only those who kill but are also those who have a narrow and intolerant mindset.  Thus extremism is another term for the intolerance, and it is also the disregard for other’s opinion particularly when you assume others to be naïve and just a bunch of mislead individuals having no democratic rights.  In my opinion, it is also extremism if you neglect the public support of a political party and try to construe its support as consisting of dumb people.

I am personally of the opinion that our urban middleclass despite the outward pretense of being educated is highly intolerant. A few days ago I was shocked to see a post with the name of “picture pick” on Facebook wall of one so called journalist, a Doctor who is said to be one of the intellectuals of Pakistan, where Chairman PPP Mr. Bilawal Bhutto was standing with few of the Lady parliamentarians for a group photo. What actually shocked me were the vulgar comments regarding Bilawal and those ladies.

I was even more ashamed when a few of my friends from USA read such vulgar comments and questioned me,” Are these people giving such third class comments just because he is standing with ladies? Is this really the educated lot in your country?”

I would have reproduced some of their comments from the picture here, but my morals do not allow me to do that. The sad thing is that so called “journalist” did not bother to object to those comments or even did not have the courtesy of removing those obscene remarks.

The question here is not to defend Mr. Bilawal- BUT to highlight so called Middle class urban population “AKA” the “catalysts” of a “Revolution”. This class is bigoted and despite its education has a tendency to view things from a preconceived and biased paradigm. PPP bashing is their favourite pastime and they don’t let go of any opportunity. Some of them will just believe the worst possible even before complete facts are known.

Let’s come to the recent memo scandal. Our TV channels, which do nothing but simply reflect the mentality of our urban middleclass have already declared the Mr. Haqanni as well as the President Zardari guilty. Of course this slanderous allegation is fully believed by a huge chunk of urban middleclass.

I personally think that maturity requires that we hold back our judgment.  If someone is accused about “something” that does not really mean that the act has happened in reality- it needs further probe. Ideally, it is considered the best for the accused to resign until the accusation is being probed- which has generally been never practiced in Pakistan. Mr. Haqqani, resigned as per the aforementioned principle. According to Mr. Haqqani’s, he had to resign because he wanted to make sure that his name was clear and secondly it was impossible to work in the middle of a media trial.

This “moderate” middleclass started saying “Daal main kaala hay isi liyay resign kar dia”or “ jahaan aag lagee ho waheen se dhuwaan nikalta hay”. Pretty lame excuse to deliberately believe something prior to the actual facts have been ascertained. And on the other hand if he had not resigned the reaction would have been even worse. Then they would have blamed Haqanni for continuing despite the allegations on him!

This is our dilemma, that just a mere accusation, renders someone worthy of article 6- which until proven is baseless. And for those who actually got more than thousand military personnel killed in Kargil, and backed off are so loyal to our country? Or who actually honored Supreme Court by attacking it? (Video footages are sufficed to prove their loyalty and respect to the “exalted” court). But Mr. President Asif Ali Zardari is being portrayed as someone worth’s Article 6 – which is nothing but just gesture of animosity.

I firmly believe that we need to enhance our definition of extremists and also include this politically intolerant mindset. I totally agree that people who kill people for their agendas are of-course extremists and terrorists but extremism prevails among the so-called educated lot- and especially the lot I discussed above-which lacks tolerance and negates the Natural phenomenon of PLURALISM. May God, give us strength to fight terrorism and extremism, to make Pakistan a non-extremist, prosperous and viable state.

Dr. Zaeem Zia, A scholar based in USA, Masters Prog. In Health Policy Management and Administration, University of Oklahoma, Muhammad-zaeem@ouhsc.edu or zaeemzia1983@gmail.com