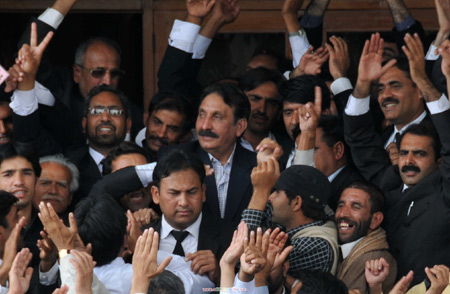 Once again Pakistan’s judiciary is playing the role of a political squad which is against democracy as well as against humanity. It is doing every effort to topple democracy – sometimes by trying to sabotage the constitution in the cover of baseless Swiss cases against the democratically elected President Zardari and sometimes by targeting federally appointed heads and important officials in different institutions. It is also at the same time supporting terrorists and criminals by making excuses of insufficient proof to punish the criminals. How can we expect justice in Pakistan when the meaning of justice has been reduced to the chief justice?

Pakistan’s judiciary, from the lowest to the highest level, has always been incapable of providing justice in important cases that media has covered. Lahore High Court is particularly notorious court which murdered democracy by working for a dictator and sentencing Pakistan’s great leader Zulfikar Ali Bhutto to death. Many years later, one of the senior judges involved in that trial would himself admit that the death sentence of the Bhutto was unjustifiable and was because of pressure exerted from the highest level.

Judiciary on all levels continued to exploit the Pakistani nation by siding with the influential and victimizing the weak or deprived segments of our society. In both General Zia and General Musharraf’s regimes, the judiciary was reduced to the puppets of the military rule. But even today, the dummies in black robes are no different. They are as much a threat to the nation as always were. The constant bias they are showing against the elected democratic government is no secret. Only that our coward media cannot question or even slightly criticize the abuses of judiciary due to fear of contempt of court – a form of military dictatorship, only dressed different.

The so-called independent judiciary, led by Iftikhar Chaudhry, who is said to have accepted a plot from Pervez Musharraf in Islamabad and was a fan of him until sent home disgracefully by the General, is clearly a wing of anti-PPP team, i.e. the military and PML-N. It has been trying to sabotage the state of Pakistan, quickly accepting all petitions against the federal government for hearing, but rejecting or delaying indefinitely the cases against PML-N, Punjab, or military establishment.

The nation has witnessed already big and shameful abuses of judicial dictatorship in the recent times. When the SC (standing not for Supreme Court, but Supreme Corruption) released the rapists of Mukhtaran Mai, it was the gang rape of justice itself by a gang of black-coat villains sitting in the premises built with the blood of poor workers, like those of Mai’s village. Where was shame then? Maybe shame was hiding somewhere because the rape of justice in SC was more shameful than Mai’s rape.

We don’t also forget the case of Raymond Davis early this year. It was the judiciary that boasted of providing justice by deciding about Raymond’s immunity. But when the date for the verdict on immunity came, it hid its tail between its legs like a scared dog and excused itself by saying that the lower court which is already seeing Raymond’s case will decide on the immunity. For many people, that day was the day of seeing the judiciary running away naked from justice.

Now once again the SC (remember it is Supreme Corruption) has been moved by the PML-N and military establishment to topple the democratic government. By violating its constitutional boundaries and limits, the judiciary has become a criminal web. This is because it is releasing the terrorists caught by police and FC forces. Faisal Raza Abidi is so right when he says that “judiciary is the problem” of Pakistan.