Editor’s Note: We would like to recommend to our readers this excellent article by Kashif N. Chaudhry, which was originally published in the Huffington Post. It is a succinct analysis of how our fellow Ahmadi countrymen are being persecuted in Pakistan on a daily basis.

In Pakistan today, the Jihadist factory created by the dictator Zia-ul-Haq has made the State hostage to its dark, savage and medieval agenda.  Interconnected groups like Sipah-e-Sahaba/Lashkar-e-Jhangvi are massacring and lynching Ahmedis, Sunnis, Shias, Christains, Hindus and Sikhs across the lenght and breadth of Pakistan and beyond. (Refer to Kabul attacks by LeJ)  The military establishment still sees such Taliban-affiliated groups as assets and its proxy politicians like Imran Khan have never opposed them.  On the contrary Imran Khan has played a horrible role in creating confusion in the minds of his urban followers that the intolerance mantained by these groups is simply a result of US involvement Post 9/11 and nothing more.  Meanwhile the Judiciary is doing its best to facilitate these violent militant groups by dismissing cases of mass murder against them and mantaining their focus to facilitate a judicial coup against the democratically elected PPP Government.

We request our readers to pass on this excellent article to President Zardari, Prime Minister Gillani and PPP Chairperson, Bilawal Bhutto Zardari.  We know that you are being attacked by a rabidly right-wing media and judiciary for the progressive legislation that is the 18th Amendment and other legislation to protect women and workers. Kindly read this and do something to alter the tide that are the dark laws  (2nd Amendment, Blasphemy law, Objectives Resolution, ALL of Zia’s illigal insertions in the Constitutions faciliated by the Judiciary) that discriminate against Pakistanis. End Note. 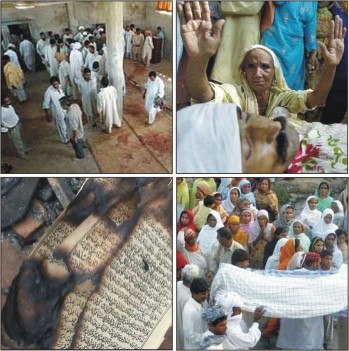 Religious freedom (or the lack thereof) in Pakistan cannot be emphasized enough. Due to the preposterous demeanor of Pakistan’s self-righteous right-wing, many in the world today are aware of Pakistan’s notorious blasphemy problem. Much frustration has been expressed on liberal Pakistani blogs and through international media outlets — especially after the heartless murders of Governor Salmaan Taseer and Minorities Minister Shahbaz Bhatti — on the abuse of these laws. Even though nothing is expected to change anytime soon, at least the first vital step toward that goal is being taken: raising awareness.

Unlike the general blasphemy laws, however, the specific anti-Ahmadi Muslim laws of Pakistan have not found even this much of luck. They have been conveniently forced out of the discussion and few are aware of the existence and continuous abuse of these draconian laws. The silence of the liberal Pakistani blogosphere and the international media in this regard is baffling.

So who are the Ahmadi Muslims and what are these laws?

The Ahmadiyya Muslim Community was founded in 1889 by Mirza Ghulam Ahmad (1835-1908), who claimed to be the long-awaited messiah. Ahmad single-handedly waged a struggle to bring about a renaissance of Islam. He declared that in this age the doctrine of violent jihad was against the teachings of Islam, a declaration met with edicts of heresy. Ahmad urged Muslims to emulate Prophet Muhammad’s example. Accordingly, Ahmadi Muslims champion a complete separation of mosque and state, promote universal human rights and interfaith dialogue and practice nonviolence and non-retaliation amid brutal persecution in parts of the world. There are more than 600,000 Ahmadi Muslims living in Pakistan with tens of millions in 200 countries.

The Ahmadiyya Muslim Community USA — the oldest Islamic-American organization — has helped foster the Islamic ideals of peace and loyalty to nation through its Muslims for Peace and Muslims for Loyalty campaigns, respectively. It recently launched the nationwide Muslims for Life blood drive campaign to commemorate 9/11 and demonstrate Islam’s emphasis on sanctity of life. The Community’s charity organization, Humanity First, has been at the forefront of disaster relief both nationally and worldwide. Help, for instance, continues to be dispensed to the victims of Hurricane Katrina to date. Ahmadi Muslims have a central leadership, the Khalifa.

It is not surprising, therefore, that Muslim clerics perceived the rapid spread of the Community in its early days as a threat. Having failed to defeat them through reason and discourse, they took to sticks and stones — literally.

After the formation of Pakistan, anti-Ahmadi Muslim groups organized to conspire and instigate massive nationwide riots. Friday sermons became an opportunity to spew venom against the Ahmadi Muslims. They were declared “apostates” and “worthy of being killed.” Extremist right-wing influence ushered in violent street protests. The State succumbed to their pressure tactics and declared the Ahmadiyya Muslim Community to be non-Muslim in 1974. In April of 1984, Pakistani President Zia-ul-Haq issued Ordinance XX. Zia was a military dictator who had taken over the country after a coup d’état in 1977. To legitimize his autocracy, he assumed de facto leadership of Pakistan’s extremist cause. Because the hatred and violence had failed to halt the progress of the Ahmadi Muslims, he decided to use force.

Under the new laws, Ahmadi Muslims were arrested for using Islamic terminology. For example, saying the Salaam (greeting of peace) meant imprisonment. Thousands of Ahmadi Muslims filled jails across the country. On one side of prison sat rapists and murderers and on the other sat those who invoked peace on a passerby. The right-wing went on to demand the death penalty. Zia conceded and introduced the death penalty for propagation of the Ahmadiyya Muslim Community and distribution of Ahmadi Muslim literature.

These barbaric anti-Ahmadi Muslim laws exist to date. Hundreds of Ahmadi Muslims remain behind bars in Pakistan — and hundreds have been killed.

These vicious laws are a threat to international religious freedom. They continue to embolden religious extremists in other countries like Bangladesh and Indonesia where similar demands to outlaw the peaceful Ahmadi Muslims have been put before the governments. In the case of the latter, these demands have been accepted in part, setting in a fresh wave of violence (caution: graphic). Because the hatred against the Ahmadi Muslims in Pakistan was promoted and not checked by the State, it continues to be exported as far out as the U.K.

Pakistani and International media make no mention of this dangerous state-sanctioned violation of religious freedom and basic human rights. Despite the fact that Pakistan’s anti-Ahmadi Muslim laws are a blatant breach of the United Nation’s Universal Declaration of Human Rights, there has been no outcry from the United Nations either.

United States’ foreign policy recognizes religious freedom worldwide as one of its goals. While the persecution of Ahmadi Muslims gained momentum under Zia, the United States — a close ally — was busy funding his government and supporting the Afghan revolution. The plight of the Ahmadi Muslims went unnoticed. Three decades later, it is very encouraging that the U.S. State Department’s International Religious Freedom Report 2010 on Pakistan takes serious exception to Pakistan’s anti-Ahmadi Muslim laws. Much, however, needs to be done to effect a change on ground. I am hopeful that as a primary supporter of international religious freedom, the U.S. will continue to play a positive role to this end.

Meanwhile, please join me in doing the least we can do: take that first step toward change: raise awareness.

Kashif Chaudhry is a physician, writer and muslim youth leader. He can followed on twitter: www.twitter.com/KashifMD