Sectarian bloodshed, in Afghanistan and Egypt, is a tool to thwart democracy and diplomacy 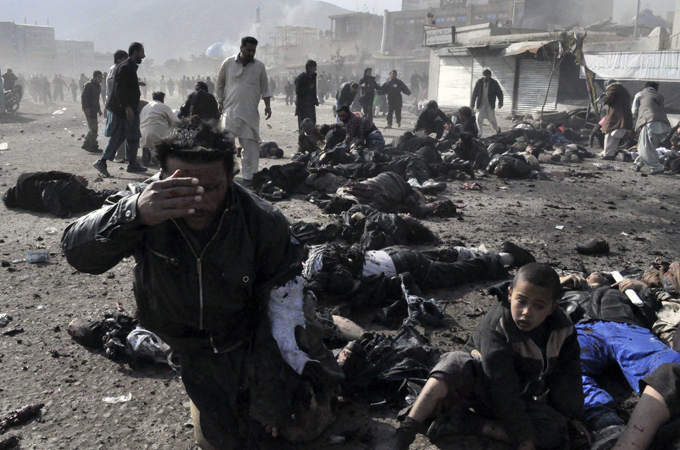 From a distance, the devastating attacks on Shia Muslims in three Afghan cities this week looked like the type of sectarian religious attacks which we got used to in Iraq. The faultline between Sunni and Shia is one of the greatest and most violent in the world, and now and again it divides countries. But in Afghanistan, nothing is ever this simple. For all its woes, it hasn’t seen a sectarian religious attack for ten years. And while the Taleban have had their history persecuting the Shia, it is highly unlikely they were responsible. The more likely ­explanation is less obvious — and even more sinister.

These attacks were intended to kill as many as possible. In Kabul a suicide bomber walking among the crowds detonated his bomb killing at least 54 people and wounding over 150. A similar walking bomber detonated himself in the northern city of Mazar-e-Sharif, killing four and wounding 20, while a third bomb left on a bicycle in a bazaar in Kandahar missed the procession and instead wounded two policemen.

The timing also made a sectarian point. The attacks took place on the tenth day of the Muslim month of Muharram, the end of Ashura, the holiest ten days in the Shia calendar, when all Muslims, but particularly Shia, commemorate the death of Imam Hussain, the grandson of the Prophet Mohammed. The processions wind their way through city streets all day; young men beat themselves with chains as penance, while many thousands of others walk beside them. All easy targets. The bomb in Kabul went off as hundreds of young Shia were singing at the Abu Fazl shrine.

And there was political symmetry too. The bombs came just a day after the conclusion of an important conference in Bonn where the international community (led by the US and Nato countries) pledged to continue helping Afghanistan for the next decade. The bombings certainly demonstrated the fragile nature of Afghanistan at present, but the Taleban issued a statement to the BBC denying that they were responsible. So who did it, and why?

To understand this requires a little history. Afghan Shia account for no more than a tenth of the population and are largely made up of Hazaras — an ethnic group descended from Genghis Khan and the Mongols. They live in the poorest region, Hazarajat in the centre of the country and zealously guard the Bamiyan Buddhas — massive statues of Buddha — which the Taleban blew up when it was menacing the Shia in 2001. There are large Hazara populations in Kabul and Mazar. For centuries the Hazaras were treated like slaves by the Pashtun kings of Afghanistan, and they are known for their ability to work hard and their love for education — as well as being extremely moderate Shia.

Between 1992 and 2001 the Hazaras were victims of bloody ethnic massacres first by Tajiks and Uzbeks, who fought each other in the bloody civil war; and they suffered again at the hands of the Pashtun Taleban who set out to conquer the country in 1994 and carried with them an ideological hatred for Shia, regarding them as non-believers. But the worst massacres of Shia took place in 1998 when Afghan Taleban commanders were supplanted by Arab fighters loyal to Osama bin Laden. They deliberately sought out Hazaras to kill. The Shia-killers — as the Arabs of al-Qa’eda were called — were joined by Pakistani extremists who slew Shia in both Afghanistan and Pakistan.

But all that really is just history. When the Taleban resurgence against US forces began in 2003, there were no massacres of the Hazaras or Shia anywhere. The Taleban wanted to show that they were no longer controlled by Arab or foreign sectarian fanatics, and that their ‘jihad’ was to unite all Afghans of whatever faith against the Americans. It was important to them to signal that the Pashtun Taleban were not intrinsically anti-Shia or anti-Hazara. Just last month Taleban leader Mullah Mohammed Omar warned his fighters not to target civilians and told them that if they did, they would face severe punishment.

Meanwhile, the Shia upped the stakes significantly. The powerful commanders of the Hazaras, backed by Iran, had privately warned the Taleban after 2004 not to touch the Shia. If they returned to the bad old days of the late 1990s, there could be retaliatory pogroms against Pashtuns now living in Iran as refugees. It helped that many Hazaras work at Nato camps, and are well-protected by Nato as a result.

For the past eight years — right up until last Tuesday — the threat of mutual destruction and the Taleban’s hands-off approach seemed to be working. Despite all the violence in Afghanistan, there was no prospect of internecine sectarian war. The only people with an interest in plunging Afghanistan into a sectarian bloodbath are al-Qa’eda and its attendant Pakistani extremists. They are desperate to scuttle the secret talks being held between the Americans and the Taleban, thinking they can profit from the resulting chaos.

Al-Qa’eda in Afghanistan is trying to repeat the formula it used in Iraq: sectarian war as a tool to divide the country, defeat the American occupation and undermine Iranian influence. By killing Shia and prompting a backlash against Sunnis, al-Qa’eda was willing to plunge a majority Shia Arab country — which had never known sectarian killings — into mayhem. It was chillingly successful in its aim.

It wants to do the same thing in Egypt. The Arab Spring has been a deep embarrassment for al-Qa’eda, which has been left behind by the public surge for democracy. So it is trying to make a comeback in Egypt by bombing the minority Christian Copts and their churches, attempting to create a backlash so that the Christians go after Sunni Muslims — and start a sectarian war into which it can insert itself, hoping this war will replace Egyptians’ struggle for democracy.

Pakistan has been suffering from sectarian war since Iran and the Arab Gulf states fought out a proxy Shia-Sunni war for influence in the early 1980s. But the killings escalated dramatically after al-Qa’eda entered the picture and recruited Pakistani Sunni extremist groups to its side. Shia constitute about a fifth of the Pakistani population, and even Iran has been unable to protect them.

In its history, Afghanistan has known all manner of ethnic conflicts, tribes, foreign invasions and poverty. But sectarian war was introduced there in the late 1990s by al-Qa’eda and some extreme Taleban elements. It rapidly subsided after 2001, when the perpetrators were deposed — demonstrating that sectarianism was not deep-rooted. But those who want to destroy any hope of reconciliation between the Afghan government and the Taleban before western forces withdraw in 2014 seem now seem to believe that sectarian warfare, and the bloodbath it brings, is their last hope.