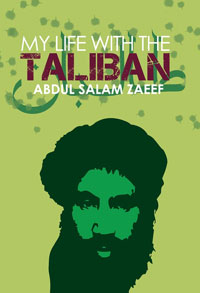 My life with the Taliban
By Abdul Salam Zaeef
Translated from Pashto and edited by Alex Strick van Linschoten and Felix Kuehn
Hurst/Columbia University Press; Pp 331

In his foreword to Mullah Abdul Salam Zaeef’s book, Professor Barnett Rubin of New York University sets the stage for the launch, ostensibly, of a refreshingly authentic work of this inaccurate and revisionist take on contemporary Afghan history.

My Life with the Taliban, written by the former Taliban ambassador to Pakistan, has been praised across the board by the media ‘Afghanologists’ such as Ahmed Rashid and Peter Bergen to academics like Antonio Giustozzi of the London School of Economics, without any critical evaluation. Some, like Christina Lamb, have gone as far as calling it a must read.

To those of us who grew up in the NWFP or Afghanistan at the height of US-Saudi-Pakistani anti-Soviet war, the crude lies presented in the account are all too apparent from the get-go, as is the translators-cum-editors’ shallow understanding of the local languages and culture.

From the outset, the village prayer leader (imam) is presented as a religious scholar and mosque madrassa as almost the counterpart of Notre Dame University. The basic Arabic text booklet — Quaida Baghdadi — which all Muslim children from Kabul to Kolkata read as an Arabic primer, is mentioned as “Al-Quaida”, only to be differentiated from the terrorist group in a tedious footnote — of which there is no dearth in the book. Frivolous and superfluous information is dignified by stuffing such footnotes with it, as is the glossary and an initial biography section. A flurry of names and events — as insignificant as a pinprick on the skin of Afghan history — have been deployed to bloat the work to roughly 300 pages.

Zaeef has taken serious liberties with the truth, which, to their discredit, the reviewers and endorsers have failed to point out. He confabulates that the Taliban were a distinct group during the anti-Soviet mujahideen wars and operated as such under their own identity and leadership.

While there is no doubt that the sundry madrassa students, i.e. Talib-e-ilm (plural: Taliban), were part of the Peshawar-based mujahideen groups and were also included in the fold of the field commanders like Abdul Haq and Jalaluddin Haqqani, there is no evidence that the Taliban operated then as a distinct entity.

The mujahideen, People’s Democratic Party of Afghanistan (PDPA), Pakistani or international media and literature — including Ahmed Rashid and Peter Bergen’s books — have made no mention whatsoever of any anti-Soviet group fighting as the ‘Taliban’ until their first appearance on the scene in the second half of 1994.

In doing so, Zaeef — though making periodic anti-Pakistan whimpers throughout the book — glosses over and indeed suppresses the role of the Pakistani security agencies in conceiving, creating, training, arming, financing and letting loose the Taliban monster on Afghanistan.

Among the key historical developments in Afghanistan during the Taliban era, Zaeef makes no mention of the major international crimes committed on their watch. He does not mention, even in passing, the killing of the former president Dr Najibullah, who was murdered by the Taliban and their handlers in utter disregard for any human, Pashtun or international conventions. That is how the Taliban rule was ushered in, in Kabul in 1996.

Similarly, he skips over the genocide of the Shiite Hazaras and the ethnic cleansing of the Tajiks in Mazar-i-Sharif while remembering this much that the former Pakistani interior minister Moinuddin Haider was supposedly a Shia.

According to Amnesty International, in 1998 the Taliban slaughtered more than 4,000 people in Mazar-i-Sharif alone. Amazing that a book that drops names like the My Lai massacre in its opening pages would not mention war crimes of this magnitude.

Zaeef and his editors make it a point to criticise and condemn the PDPA for its land reform policy and allege that the party systematically eliminated the traditional power brokers like the tribal chieftains, landlords and indeed the petty mullahs.

In his selective amnesia, Zaeef makes no mention of a much more vicious version of the same strategy deployed by his regime, through which wholesale killing of teachers, middle class employees, politicians and tribal elders took place on both sides of the Durand Line. In fact, the Afghan Taliban and their Pakistani counterparts commissioned and conducted the bombings of whole jirgas (assembly of tribal elders), creating a power vacuum that the militants themselves would subsequently fill.

The book’s author and his editors have taken pains to construct a positive image of the simple and pristine Afghan village life in building a narrative of Kandahar and Zaeef’s childhood spent therein. This quasi-romantic interplay of village life, characters like the author’s widower father — a spartan prayer leader, mention of music and Pashtun dance atan, is a blatant attempt to put a humane face on members of a fascist regime, which inarguably remains the most brutal phenomenon of the late 20th century.

That Mullah Zaeef, his editors and academics like Professor Rubin have attempted to humanise a monster is clear. But the question is why?

Zaeef in this book emphatically criticises and condemns the notion of hard vs soft Taliban. However, ever since his image holding an iPhone appeared in the US a couple of years ago, he has been a focus of attention of the regional and world players involved in Afghanistan. Faced with an economic crunch and running against an election clock, the US is clutching at straws to bolster its flawed plan for the endgame in Afghanistan.

While Obama had his Gorbachev moment on December 1, 2009, the nuts and bolts of the withdrawal were not clear. In their quest to turn failure into at least a perceived success, the US policy-makers are now scrambling to resuscitate, retrofit and rehabilitate such dubious characters as Abdul Salam Zaeef.

My life with the Taliban is a poor narrative by a tainted and poor historian (raavi-e-zaeef). The glorification of the book by authors of repute, impugns their credibility too.

Dr Mohammad Taqi teaches and practices medicine at the University of Florida and contributes to the think-tanks www.politact.com and Aryana Institute. He can be contacted at mazdaki@me.com

Click here to post a comment
Inqalab: Laal’s new song on the bonded labour in Pakistan
Deconstructing the SC order on the memo – by Asad Jamal