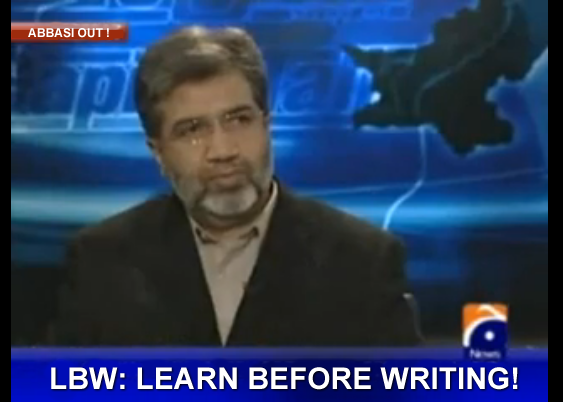 Pakistan’s apex investigative journalist and wannabe political advisor / strategist/ analyst / national builder / true muslim, Ansar Abbasi has written a special investigative report good enough to take the bragging rights of using the “Sindh Card” for the first time in reality. While the PPP and President Zardari are castigated time and again for their “threats” of using a “Sindh Card” just to prolong their rule, Ansar Abbasi has shown the reality to all of us. He says that PPP government led by PM Gilani has been relying on Punjabi Baboos for running the bureaucracy whereas there are just 3 out of 49 Federal Secretaries who belong to Sindh.

Now the report has been filed by looking at the domiciles of these Federal Secretaries. Can we dare ask Ansar Abbasi that does having a domicile confirm your ethnicity? Is it necessary for a Punjab domicile holder to be a Punjabi, Sindh domicile holder to be a Sindhi and so on? I for one know that both Waqar Masood Khan and Nargis Sethi both belong to Karachi and are in essence Urdu speaking. Does that mean that there is only one Sindhi as a federal secretary?

On one hand, Ansar Abbasi plays the role of a nation builder asking people to shun their nationalities and work towards a better Pakistan, and then on the other hand, writes this cheap essay that is nothing to fan ethnic tensions among people.

Please think before you write, Ansar Abbasi. Your reports are increasingly becoming irritating and worth trashing. And by the way, have you leased a space for yourself on the front page of The News and Jang, irrespective of the report?

ISLAMABAD: President Zardari’s blessed Gilani government, which makes tall claims about serving the interest of the smaller federating units and leaves no opportunity to use the Sindh card, is betting on the brigade of top Punjabi bureaucrats to run his government as other provinces have either no or extremely low representation in the federal secretariat.

Out of the 49 federal secretaries, heading federal divisions, 43 belong to Punjab, three each from Sindh and KPK while there is not even a single bureaucrat from Balochistan leading any of the federal divisions. Two of the three federal secretaries, including Cabinet Secretary Nargis Sethi and Finance Secretary Dr Waqar Masood, have hardly or never served in Sindh in their whole career.

Punjabi bureaucrats never had a smoother sailing in the history of Pakistan than what they are presently enjoying under the PPP regime—a government which otherwise pays a lot of lip service to the ‘federation’ and the rights of the smaller federating units.

A who’s who of top-level federal bureaucracy reveals that the Federation of Pakistan has practically withered away as far as top-level bureaucratic placements are concerned. Despite all the much ado about the Balochistan package, Sindh mainstreaming and addressing the deprivation in Khyber Pakhtunkhwa, the smaller federating units have practically nil representation at the policy and leadership level in the federal civil services and at the top policy making body of the country — the federal secretariat.

All the key civil servants posted in important bureaucratic positions are either direct ‘selectees’ of Prime Minister Gilani or ‘recommendees’ of Senior Minister Chaudry Perviaz Elahi as terms of engagement with the PPP have made it a point that all the Punjabi bureaucrats who were part of the Pervaiz Elahi team in Musharraf regime are given key positions in the federal government. This favouritism have totally disproportionate the share of the federating units in complete favour of Punjab.

It is shocking to see that out of 49 ministries and divisions surveyed, 43 positions of federal secretaries are occupied by Baboos belonging to Punjab, whereas three posts of federal secretaries are occupied by Sindhi bureaucrats, three by officers, belonging to KPK, and PM Gilani could not find even one single Baloch civil servant for a responsible position in Islamabad.

As per the Constitution, the share of provinces in the Federal Civil Services is 50 percent for Punjab, and 23 percent for Sindh, 11.5 percent for KP, 4 percent and 5% for Fata and 4 percent for Balochistan. Any government which wants to strengthen the federation should go beyond this proportion on the principles of affirmative action.

One strange aspect of this scandalous under representation of smaller provinces at the top position in Islamabad is that all the major coalition partners of the PPP belonging to smaller provinces — the MQM, ANP, JUI, Fata representatives and PML-Q — have never raised a word against this historic injustice to the federation.

It is worth mentioning here that all major policy formulation bodies, like the federal cabinet, ECC, Ecnec, Planning Commission, depend on expert advice of all these federal secretaries, hence the smaller provinces are practically excluded from these important policy positions.

Click here to post a comment
Wrong decision to boycott the Bonn conference
For Shia Muslims worldwide, Karbala is not over, Ashura has not finished yet – by Maisam Ali