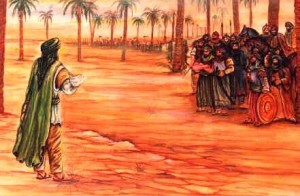 Karbala is infinite, eternal and ever-encompassing. This is not only the Euphrates (A river flows through Syria and Iraq) that has beheld atrociousness incarnated by Karbala, but the Nile, the Oxus, the Helmand and the Indus are also among the silent beholders. Mesopotamia (Iraq), the cradle of civilizations, is not solely carrying the grievous burden of Karbala. Darfur, Najd, Hazarajat, Bolan and Indus valley have also joined hands in shouldering the unbearable burthen of the tragedy. Yazid is not the lone progeny of Umayyad but myriads are out there who trace their roots to tyranny and oppression. For that matter Hussain ibne Ali (A.S) was not alone, nor is he and never will he be.

The point of truth that ironically is largely missed out by the morbid consciousness of most, if not all, Muslims is that both sides of bloodstained divide proclaim to be the proponents of same religion. As far as history of religions is concerned, Islam is by far the most exploited religion that has been put upon by the tyrants and oppressors to carry through their vicious designs. To vindicate the crimes against humanity in the name of religion, the abettors of tyrants further obfuscate the matters by passing the blame to the adherents of other religions. They may even make up a fictitious character Abdullah ibn Saba to transfer the onus of blame from Yazid to Saba’iyyas by the virtue of their supposedly Jewish roots. The institution of blaming the others, in absence of necessary introspection, is still prevalent that has come to be a phobia. Hussain, on the contrary, is the name of calling out the atrocious ones hiding behind the cloak of religion and Karbala is the story of atrocities perpetrated by Yazids of respective ages.

Right in the heart of the land where Kaa’ba stands tall, there’s a ghetto like city situated on the eastern bay of Arabian Peninsula named as Qatif – much isolated and deserted socially and economically as it seems. Qatif is the home of Qatifi people whose history goes back to 3500 B.C. They are overwhelmingly Shia Muslims who make up about 95 % of half million of total population of the town. On the whole, Shias constitute 10 to 15 % of total population of Saudi Arabia where majority of them lives in the Eastern Province of the Kingdom. Shias are subjected to severe kind of discrimination and persecution at the hands of Saudi authorities who consider them as apostate for not being in line with puritanical Salafi beliefs.

Shias are not allowed to serve as teachers of religious studies in schools. The syllabus in schools preaches hatred against them by equating them with the presumably astray followers of other religions. There are 300 schools in Shia dominated Eastern province and none of them has Shia Principal. Shias are disqualified as witnesses in court, cannot serve as judges in ordinary court, and are banned from high-ranking government or security posts, including becoming pilots in Saudi Airlines. They are also banned from gaining admission to military academies. Last two years have seen a spate of violence against the people of Qatif in particular where dozens of them have been killed by the Saudi religious police while demonstrating for their rights and most, if not all, incidents have gone deliberately unnoticed not only by the local but the international media as well. Not a single voice has been raised by the fellow Muslim countries that are in habit of rhetorically making solemn pledges of Muslim brotherhood day in and day out, and ridiculously outcry over the hidden Zionists’ designs.

Not far away from the Eastern coast of Saudi Arabia across the Gulf of Bahrain, there’s archipelago of about 33 Islands named as Kingdom of Bahrain. Over 70 % of population of the Kingdom belongs to Shia Islam ruled by Sunni Al-Khalifa family that had migrated from Kuwait in eighteenth century. Discrimination against Shia Muslims in Bahrain is severe and systematic enough for a number of sources to have used the term “apartheid” in describing it. This is how Time Magazine had to describe the sorry state of Shias living in Bahrain.

“A form of sectarian apartheid by not allowing Shiites to hold key government posts or serve in the police or military. In fact, the security forces are staffed by Sunnis from Syria, Pakistan, and Baluchistan who also get fast-tracked to Bahraini citizenship, much to the displeasure of the indigenous Shiite population.”

According to the Bahrain Center for Human Rights, while the Shiites exceeds 70% of the population, “they occupy less than 18% of total top jobs in government establishments. In several government ministries and corporations no Shiite is appointed in leading jobs.” Jobs in the police and armed forced are reserved for Sunni. Sunni Muslims from favored tribes are admitted to Bahrain as citizens to fill these jobs. Shiites and “some Sunnis of Persian origins”, are banned from residing in the city of Riffa, where only the Sunni Muslims are permitted to live.

On 14 March, 2011 at the helm of uprising, the Gulf Cooperation Council (GCC) agreed to deploy Peninsula Shield Force troops to Bahrain using Iran as pretext. Saudi Arabia deployed about 1,000 troops with armored support, and the United Arab Emirates deployed about 500 police officers. The Pearl Roundabout was violently cleared of protesters within days, leaving many of them dead. That was the most ignominious act one, logically, could expect from the flag bearers and champions of Palestine cause but it is what it is – so much for Muslim brotherhood. There was habitual silence from the Muslim countries around the world who are accustomed to blame the ‘others’ only.

Across the Arabian Sea, the shores have turned proportionally bloodstained that once were the welcome land for divergent faiths till they carved the ‘the land of the pure’ out of it. With each passing day the phenomenon of purification is gaining momentum while leaving many of the ‘heretic’ sects vulnerable to bedevilment – Shia Muslims make the bulk of heretics. Not only that the Shias have been systematically target killed and made vulnerable to suicide attacks across the longitude and latitude of Pakistan during the past decades, there are two particular areas home to the humanitarian crisis.

Kurram, one of the Pakistan’s tribal agencies in the country’s rugged northwest, borders the Afghan provinces of Khost, Paktia and Nangarhar and comprises three subdivisions: Upper Kurram, Central Kurram and Lower Kurram, with total population of half a million. As with the waging of Afghan Jihad from Pakistani State, the Kurram was made home to Sunni insurgent groups like Hizb-e-Islami led by Gulbadin Hikmatyar by Pakistan’s intelligence services. That left the horrendous effects on Shia-Sunni harmony in Kurram where Sunnis were systematically forced to migrate to Lower Kurram making the Shia population concentrated in Upper Kurram that comprises mostly of Turi and Bangash tribes. Militant groups like TTP (Tehreek Taliban Pakistan), Lashkar-e-Islam, Ansar ul Islam, SSP (Sipah Sahaba Pakistan) and Haqqani network maintain heavy presence in the area under the collusion with intelligence agencies of Pakistan. Hundreds of Shia people have been killed since 1980s as result of spate of violence against them. More than 1500 people died in clashes in Kurram between 2007 and 2010 given the Tal-Parachinar road that connects Kurram to Hangu and other areas of Pakistan has been blocked by Taliban besieging the people of Kurram and not allowing them to travel on the road. As the crisis is at its apex, the media in Pakistan looks the other way by vociferating over the drone attacks and fabricating stories of alien spies, and cares a hoot the besieged people of Kurram as if they are lesser Muslims.

Hazaras Shias are probably among the most unfortunate, persecuted and maltreated people on planet earth. There are half and million Hazaras living in Quetta, Balochistan who started migrating to Iran and Balochistan from their native land, Afghanistan, during the last years of eighteenth century because of facing severe oppression at the hands of Afghan king Abdur Rahman Khan.  It is estimated that more than 60% of the Hazara population were massacred or displaced during Abdur Rahman’s campaign against them. While during the Taliban regime in Afghanistan Hazara Shias had been massacred not only in their native land Hazarajaat but also in Mazar Sharif and Kabul when thousands of them perished by the virtue of belonging to Shia sect. In Quetta, the last decade has brought yet another era of terror for Hazara peoples. During this period around five hundred Hazaras have been killed by the fanatics of Punjab based Anti-Shia terrorist group LeJ (LAshkar-e-Jhangvi) who are hand in glove with the TTP militants hiding in safe havens inside Pakistani territory after NATO’s attack on Afghanistan. State has not only miserably failed in protecting the innocent Hazaras but also has played the role of abettor by releasing the notorious leaders of LeJ who have gone overboard in inseminating the hatred and inciting violence against ‘Heretic’ Shias. While the Hazaras are being killed on a daily basis by Pakistan’s ‘own people’, there’s not an iota of public resentment that keeps pouring out sporadically over the ‘foreign intrusions’.

Myriad of moons have gone by since the grandson of the Prophet (PBUH) was slain on the cruel soil of Karbala by the despot of Damascus, but the moment has seemed to be spread like a curse over the whole Muslim civilization. Tyrants still draw their power out of ignorance of people by tranquilizing them with delusory brotherhood among the Muslims and inseminating hatred for other creeds, while hiding the ulterior motives. The caravan of Hussain ibne Ali (A.S) has not stopped yet. The Karbala is not over. The Ashura has not finished. There are hundreds of thousands out there perishing their lives epitomizing self sacrifice to keep the Karbala, resistance against tyranny and oppression, alive. Until the last man standing to the injustice and cruelty doesn’t go down, the Karbala is not over. For that matter, Hussain ibne Ali (A.S) was not alone, nor is he and never will he be.

Click here to post a comment
Step aside President Zardari and PPP, Ansar Abbasi plays the “Sindh Card”
Whom are you fooling Nawaz Sharif? – by Shah Hussain Lahori