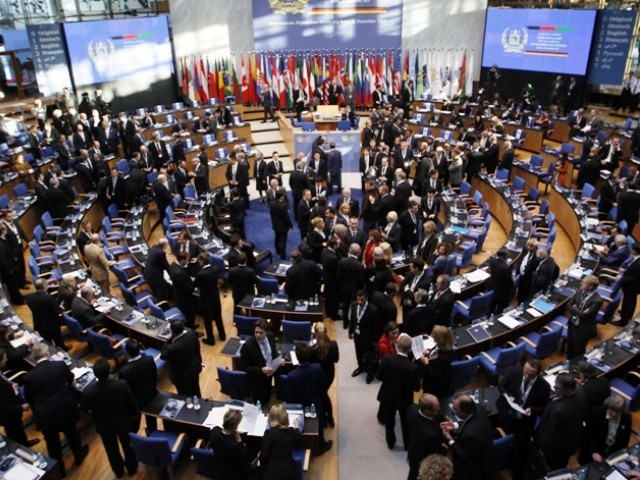 After the Pakistan decision to boycott the conference, now it won’t be able to directly interact with international community and put it’s message across in a moot where about 100 countries and international organizations will be represented to discuss Afghanistan’s future beyond 2014, with some 60 foreign ministers in attendance, among them U.S. Secretary of State Hillary Rodham Clinton, but our policy makers civilian and non civilian have opted to stay out of a international forum completely. So we missed the bus again.

The important question is how this decision will help us? Simply it is a great mistake for Pakistan to isolate itself entirely from the whole world and thus weaken it’s position in the region. Our civilian and especially non civilian strategists made a great mistake in not joining the conference. It would have been good for the entire region. Lamentably we have chosen isolation over interaction.

My point of view: Instead of boycotting the 2nd Bonn conference in Germany we should have taken it as an opportunity to present our point of view and explain how we view end game i.e what kind of region viz a viz Afghanistan, an overall future scenario, a broadly-shared vision, an ideal picture of south Asia & Central Asia region, exactly, do Pakistani strategists want?

Not only we missed a big opportunity to engage with international community and explain our differences with endgame, but once again we failed to represent Pakhtuns, who have been and are to be ultimate sufferers if the state can’t present their case rightly. The PPP-Sherpao and the ANP are the parliamentary parties from Khyber Pakhtunkhwa have showed reservation on the decision to boycott the Conference. Mostly countries and foreign press is viewing Pakistan as Taliban representative, so we would have dispelled this notion by representing Pakhtuns rightly & by presenting a broader peace, security and trade based agenda.

The U.S. ambassador to Afghanistan, Ryan Crocker, who had to spend 18 hours in a bunker to keep himself alive during September 13 raid on the American Embassy and NATO headquarters in Kabul—in which Haqqani insurgents besieged the compound with guns and rocket-propelled grenades, killing at least 16 people—said on Saturday it will be Pakistan’s loss if its government boycotts the upcoming international conference on Afghanistan’s future scheduled to start Monday in Bonn, Germany.

During an interview with VOA’s Afghan service, Ryan Crocker said that Islamabad’s absence from the conference will be “unfortunate.” But it cannot derail Afghan progress.

“Frankly, it will be their loss if they are not there, Crocker said. “It isn’t going to change the outcome of the conference.”

UN chief Ban Ki-moon has termed as “regrettable” decision to boycott the conference :

“Pakistan is one of the key countries in the region who can help peace and stability in Afghanistan and thus it would have been much better if Pakistan was present in the conference. I feel it regrettable that Pakistan has decided not to come,”

Germany calls Pakistan’s pull-out a “setback” for the meticulously planned conference. But organisers say they are confident Islamabad will also see itself as committed to the principles laid out in the meeting’s final declarations.

“We believe it is very much in Pakistan’s interest to attend the Bonn conference because the focus of that is all about trying to build a more stable and peaceful Afghanistan,” said State Department spokesman Mark Toner.

The Express Tribune’s editorial, “An angry good bye to Bonn” describes the decision as an emotional rather than rational:

The national consensus in Pakistan is emotional rather than rational because the military, which is endorsed in its stance by this consensus, has not encouraged the political players to plan an appropriate strategy after the Mohmand attack. As its details came to light, Pakistan was expected to gain the moral high ground at Bonn and stood a better chance of pushing through its own proposals on post-withdrawal Afghanistan, and that is why attending it would have been a better option. The Americans might have been pressured after that to render to Pakistan the apology it needs to assuage its rage.

The West, which was supposed to contribute financially to post-withdrawal Afghanistan’s security and economic development, is today mired in its own economic crisis of historic proportions. The conference will probably end up exhorting the ‘concerned nations’ and Afghanistan’s neighbours to do their best to bring durable peace to Afghanistan on the basis of a peace process involving all Afghan factions. As for Pakistan, it is absenting itself because it is not sanguine about the conference’s outcome. However, the outcome it wants — which is mostly India-centric — has not found favour with the international community. Pakistan will have to face the outcome: it will have to continue to harbour important Afghan players, and the regional states led by India will go on looking at Pakistan as a troublemaker and will see to it that the Taliban don’t ‘conquer’ Afghanistan the way they did in 1996. Isolationism as an expression of anger at this point does not suit Pakistan.

The world has high expectations of the conference at Bonn. But our voice will remain unheard at that international forum, given that our neighbour India goes into the event with the tag of being the only countrywith which Afghanistan has signed a security pact. While other neighbor countries including Russia appear to broadly support India’s interests.

The appeasement of right-wing lobby is just cultivating more and more isolation for us, furthermore, this policy is hurting our economic interests with shrinking space in the region.

The path we have chosen for ourselves & the region, which may be based on the popular opinion influenced by right wing scholars and leaders or by irresponsible media anchors, but it will certainly not be good for a country, which is continuously moving towards destabilization, religious extremism and isolation.

To overcome this potential negative decision & other ill-conceived policies in the past, we must try to understand the modern liberal democratic world and it’s priorities & universal ethical values and try to align ourselves with the global political democratic realities & trade oriented free market system.

Syeda Abida Hussain is the voice of sane reasoning yet again:

CNN-IBN’s report on the Bonn Conference:

US Secretary of State Hillary Clinton delivers remarks on Afghanistan: