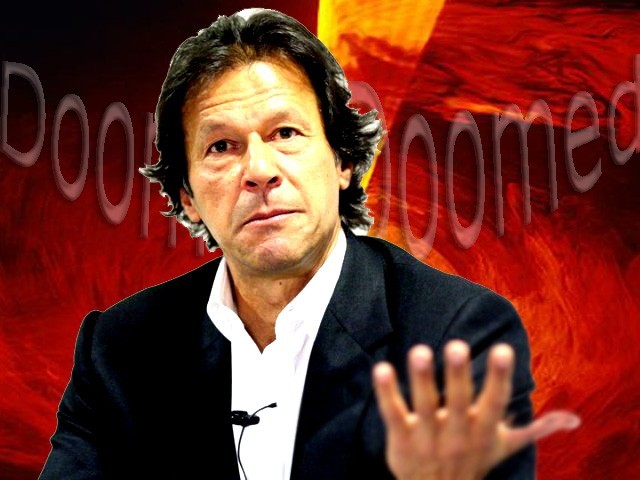 Pakistan’s pro-establishment media, journalists, pundits and spin doctors are relentlessly trying to usher in a possible new alternative to the current traditional political class of the country- led by PPP and PML (N). A day hardly passes by when one does not see pressers, articles and talk shows eulogising the upsurge in the political fortunes of Imran Khan.

Now the feudals, the Gadaanasheens and the turncoats have lined up to join Imran Khan’s bandwagon, of course with the consent of their “masters”. The powerful PR machine of Imran Khan only reinforces one message: Imran Khan is going to win the next election.

If indeed Imran Khan’s Tehreek-e-Insaf comes to power with the acquiescence of the establishment, this begs the obvious question: What does the future hold for Khyber Pashtunkhwa and FATA and perhaps for Afghanistan and world at large.

Though, it remains to be seen whether the elections are held in 2013 or much earlier, the question no less important is what will happen if Imran rides the euphoria created by the above circles in Punjab-the traditional hegemonic power base- and comes to power.

One possible scenario is the that Imran Khan wins in Khyber Pashtunkhwa and clinches seats in FATA, so  that he can form  a government in the province. It is not a mere theoretical possibility. Let us start with FATA. FATA’s 12 seats in National Assembly and 8 in Senate can easily be delivered to Imran Khan as FATA is directly run by the GHQ. Thus arm twisting, bribing and manipulating of people in FATA are time tested tactics of the establishment to favour its blue- eyed elements to grab seats in Pakistan’s parliament.

Like other parts of Pakistan, in Khyber Pashtunkhwa too, there is a targeted campaign going on to focus on the usual turncoats, the so-called winnable candidates, and the establishment’s old guard   including the likes of Masood Sharif Khattak and Rustum Shah Momand to barter loyalties for Imran Khan. Besides, sensing the possible success of Imran Khan in elections, such elements will likely easily gravitate to Mr Khan. If everything fails, the favourite method of the establishment i.e., rigging elections in Imran Khan’s favour, is never out of its arsenal.

The 2002 elections that led to MMA Government were rigged with the premise to show the world, particularly the US, that Pashtuns were angry after the US invasion of Afghanistan. Now that the US and Islamabad relations have reached new lows, it would make more sense to show engineered “anti-American feelings” expressed in possible Imran Khan electoral victory in the country’s strategic north Western region including Khyber Pashtunkhwa and FATA.

Such an eventuality would have far reaching consequences for the peace of the province, stability of Afghanistan and security of the world.

We already know that Imran Khan preaches the virtue of dialogue with militants and is in cohort with ideological god fathers of Pakistan’s establishment i.e., Mirza Aslam Baig and Hameed Gul that proxy militants operating in FATA are by their nature “Pashtun resistance” to NATO invasion of Afghanistan and that Pakistan should “disengage” from the US “War on Terror”.

Simply translated, Islamabad should stop containing these militants particularly the TTP since Pakistan is already in peace with “good”  militants fighting the NATO forces in Afghanistan while at best tolerating the Al Qaeda and its linked-outfits’ presence in FATA. Recent reports that militants are in exploratory talks with the government are part of this thinking.

Unfortunately, Imran’s proposition regarding militancy in Pashtun areas if implemented in letter and spirit, may lead to these possible outcomes: first, the militants will likely to take over the whole of FATA. Second, FATA will become a defacto Taliban Emirate extending from Bajaur in the north to South Waziristan in the south (they have already established courts, police and kind of administrative shooras) further consolidating stranglehold around Pashtuns as any possible Imran-led governments in centre and province will simply turn a blind eye towards them.

The by-product of Imran Khan’s Taliban-appeasement policy will spur militants to concentrate more on Afghanistan. The TTP’s one time leader  Baiutullah Masood alone  sent nearly  250 groups of  fighters to  Helmand to fight NATO forces in Afghanistan  in  2006 (Source: Inside Al Qaeda and the Taliban: Beyond Bin Laden and 9/11 by Saleem Shahzad -Pluto Press 2011). In such a scenario, the  proxy  Taliban-led insurgency in Afghanistan  will  greatly help Pakistan’s establishment  realise its strategic objective: keep pressurising  Afghan government until at least it surrenders part of its foreign and domestic policy  to the dictates  of   Islamabad-at times when the west is about to draw down its troops. .

Giving further “strategic depth” to the TTP and other militants through dialogue and accommodation at highest political level by Pakistan, the TTP   will likely gain time to regroup, rearm and hence re-launch itself.  These militants camouflaging Al Qaeda, will likely translate   FATA into latter’s mythological state of “Khurrasan” paving way for much larger possible plots against not only Afghanistan but the rest of the world. Al Qaeda may never shrink from its agenda of launching more transatlantic attacks. In case of such attack(s), footprints will sure be traced back to FATA spelling tsunami for Pashtuns in particular.

Supposedly, the infamous “Taliban” Khan forms a government in Khyber Pashtunkwha, it will have wider consequences for the province as well: since he believes that the Taliban are the Pashtun “resistance”, his possible government will simply acquiesce to their moving in to the settled districts of Khyber Pashunkhwa adjacent to FATA.

Unlike the ANP-led current government, it will not attempt to contain them to FATA region. The obscurantist agenda of the militants will simply turn the Pashtun clock back to medieval times. For they (militants) wrapped in Wahhabi ideology, are against education, Pashtun culture, Pashtun code of life (the Pashtunwali) and Pashtun heroes and music. This is going to be a nightmarish scenario for Pashtuns in the province as they are already the victim of Pakistan’s “Strategic Depth policy” in Afghanistan.

Khyber Pashtunkhwa being next to FATA and thus Afghanistan has more nuisance value as well: the establishment would love to have a more pliant government at the helms that has no problem with strategic proxy assets of Islamabad in FATA and Khyber Pashtunkhwa. Whereas the ANP has taken a clear stand against terrorists and opposed both external and internal violation of country’s sovereignty. The ANP-led government has successfully fought the war against militants and sustained public opinion against these militants.

Following the 18 Amendment, concurrent list has been abolished and subjects transferred to provinces, including education. The ANP-led government in Khyber Pashtunkhwa has started slowly altering the social agenda by introducing Pashtu subject in schools and introducing other reforms. As the establishment has always been wary of “irredentist credentials” of Pashtun nationalists, the possible Imran Khan electoral victory could easily put a stop to the ANP-led new social agenda for Pashtuns.

This is the time, the ANP in particular takes the electoral threat of Imran Khan seriously and devises a strategy to counter his possible gains in Khyber Pashtunkhwa.

The new generation of Pashtuns who have access to social media and the Internet are more impressionable and easily succumb to the appeal of propaganda PR machine of Imran Khan. A clear strategy needs to be devised aimed at this particular group.

Secondly, the ANP needs to enter into electoral alliances and seat to seat adjustments with other like-minded political parties including PKMAP, PPP and PML (N), and for any possible exploratory talks, this could be the right time. For containing the imminent danger of the new form of establishment’s erstwhile MMA i.e., Imran Khan’s Tehreek-e-Insaf, the Pashtun leadership needs not to sacrifice the interest of the Pashtuns at the altar of any false ego.

The Pashtun civil society should clearly articulate the case against voting Imran Khan in the next elections. This is their moment of truth to counter the thin layer of lies and falsehood hyped by Pakistan’s   parochial-media houses in Lahore and Karachi, surrounding the establishment’s new “stooge”-Imran Khan.

The message going out to Pashtuns cannot be starker and sterner than this: a hero and saviour for Punjab may spell disaster for Pashtuns.

Writer can be reached at: janassakzai200@gmail.com