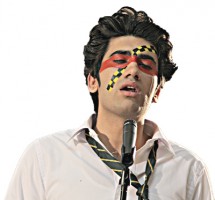 Hoodwinking history by being clever-and-a-half

Student of Matric? Intermediate? Bachelors? Fear no more and rejoice, for your Pakistan Studies-related troubles are finally over. The following is for the benefit of people like you, who have gone through severe mental torture and physical pain while preparing for the Pak Studies exams. The trick is to focus not on what you know but what the examiner is looking for in the answers.

For some reason, Pakistan Studies kick-starts with Muhammad Bin Qasim. You don’t have to read anything about the whole episode since you now have enough information on Memogate to attempt the question on Qasim’s intervention in Sindh, except the fact that the alleged woman who wrote him the letter was a victim while the alleged contrivers of the memo have committed high treason. Let’s not get bogged down in trivial details though and let’s focus on the big picture.

Nobody contributed more to Islam in the subcontinent than Mehmood Ghaznavi (you can thank your lucky stars if Shah Mehmood Qureshi turns out to be the Dhaaga Peer of your examiner). By the way, usually there’s never a question raised on either Ranjeet Singh or Sir Syed. In case you get one, screw Ranjeet but remember to go easy on Sir Syed Ahmad Khan. Granted, he never was such a great guy, but we have kind of forgiven him with time.

We then come to the Mughal dynasty. The ‘Golden Era’ of our history when all the emperors used to weave straw pray mats to make their ends meet, except for Akbar who was a drunkard, married Hindu women, and invented his own religion.

It doesn’t matter in the least if you still can’t fathom why the Khilafat Movement was carried out in the Indian subcontinent while the indigenous ignorant masses of Turkey referred to the godless Mustafa Kamal as Ataturk – their father. The point, folks, is not to inquire but to score marks. Thus, when this question pops up in the paper – and it will in most examinations – skipping the unnecessary details and expounding under one heading Gandhi ki syaasi qalabazi (Gandhi’s political summersault) insures full marks.

No exam is complete without the Fourteen Points of the Quaid e Azam. It says fourteen, but you only have to jot down thirteen – exclude the one which says “Full religious liberty, i.e. liberty of belief, worship and observance, propagation, association, and education, shall be guaranteed to all communities.”

Skim through the question paper and look for the Two Nation Theory. Wherever you find it – trust me, you will find it – is a good place to copy paste this line: “The Two Nation Theory was inevitable because the Hindus consider cow their god, while we eat it.” There! Congratulations, you have the examiner’s heart right in your palm now. In case you don’t want to attempt any further questions, just add another line to the above statement and you are free to leave the examination hall with the mission accomplished. This line: “The Two Nation Theory was founded the day the first Muslim set foot in the subcontinent.”

Invaluable tips on wars: Remember that never once in our entire history did we either start a war or lose any, never mind what Nazir Naji says about 65 – he is not a even a graduate! India conspired in 71, manipulated our naïve Muslim brothers with its evil machinations, resulting in the Fall of Dhaka. There is no need to mention that you watched that surrender video on Youtube. We made Russia flee from Afghanistan without any foreign help (don’t watch Charlie Wilson’s War before your exam) .We would’ve had Kashmir as well if it hadn’t been for Nawaz Sharif chickening out on Kargil. Fortunately though, recent endeavours are yet to be a part of the syllabus; ISPR hasn’t approved the text yet.

Just remember the tenures of all the Presidents and Prime Ministers. Don’t try to be smart about army coups. All the martial laws were the need of the hour. On each occasion, the people begged the army to save Pakistan. Each time, the general in charge succeeded in saving Pakistan.

On our relations with neighbouring countries: The best are with Saudi Arabia, though Saudi Arabia isn’t our neighbour – nobody ever bothered correcting this and neither shall you! China comes second, India still practices Chanakya politics and has refused to accept us as a sovereign state; hence they never got a number in our ‘Friends Forever’ list. We share our longest border with Afghanistan and we are always the first to help them when they are in need. We would have liked Iran and Russia a little more than we do if they didn’t fall for the traps India sets for them to go against us. As for Bangladesh, it still repents getting played by India but overall relations with them are friendly because we magnanimously chose to forgive them. After all, what is a momin if not a forgiving man.

We are an agrarian country by all the longitudes and latitudes. We have all the four seasons, brag that this is a haven for tourists. Again, no need to be clever with Swat being a cantonment rather than a tourist spot anymore.

There you go, I believe I have covered all the FAQs from the past papers and scavenged the really useful material out of the textbooks as well. Writing lengthy answers to get passing marks is a myth. The whole deal lies in giving the required answers. Soaked almonds and Surah Yaseen do help!

The writer is a member of the band Beygairat Brigade that has recently released the single Aaloo Anday.

Click here to post a comment
Media and rise in intellectual infertility -by Shafqat Aziz
Who is the biggest aggressor, Taliban or US? -by Arshad Mahmood