The killing fields of Pakistan
The bloodbath in Karachi continues. The death toll in the last week alone has reached over 100. A glance at the online tally of dead bodies in Karachi leaves not much room for hope in Pakistan’s largest city. The citizens appear helpless, the government looks impotent, and the future looks grimmer by the day.

While the resurgence of violence in Karachi is a recent phenomenon, the rest of Pakistan had been engulfed in senseless violence since 2003. No fewer than 36,000 Pakistanis have died in violent deaths in the past eight years, making Pakistan the hotbed of religious, political, and ethnic violence. 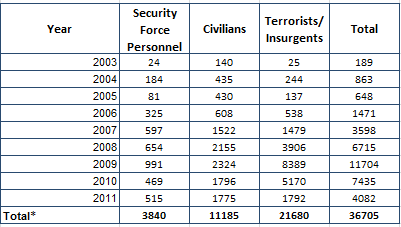 Not all victims of the senseless violence are civilians or the security force personnel. In fact terrorists and insurgents constitute the largest group of those who died a violent death in Pakistan. Since 2003, 21,680 terrorists have been reportedly killed in Pakistan. Surprisingly, Pakistan is no safer today even after such a massive death toll has been exalted on the perpetrators of violence.

Many in Pakistan and abroad see these numbers with suspicion. First, the very number (21,680) appears grossly exaggerated. Even if the proclaimed number of terrorists killed is around 22,000, one cannot ascertain how many of those who were labelled as terrorists were in fact collateral damage, i.e., innocent civilians ending up at the wrong place at the wrong time.

The recent claims by the US authorities that no civilian has died in recent drone attacks in Pakistan is one such example of an engineered narrative of war that tries to paint death and destruction in a clinically humane way by portraying all victims as murderous terrorists. Admitting death of bystanders, school children, and women would present an uglier, yet a true and perhaps unacceptable picture of war.

The policy to paint all dead as terrorists inflates the number of terrorist deaths and underreports the death of civilians. Even with the deflated stats, almost 11,200 civilians and 3,840 security personnel have died in Pakistan since 2003. For a nation that is not in a state of war with a foreign power, such a large number of violent deaths are indicative of a civil war. 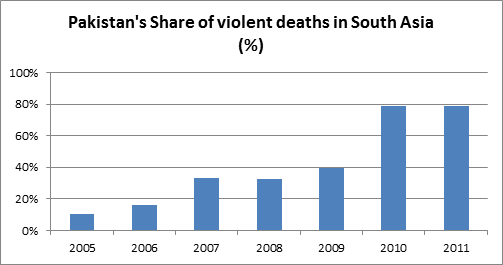 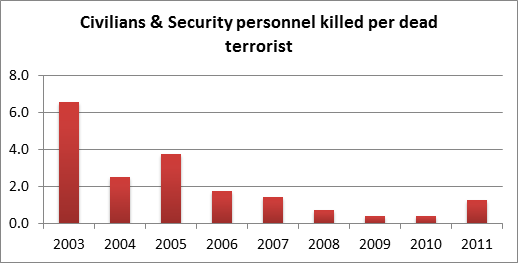 The last few years of violence in Pakistan is similar to what had transpired in Sri Lanka. The Sri Lankan government in 2009 responded with all its might to tackle Tamil Tigers who have been orchestrating a militant separatist campaign.  In 2009 alone, 11,000 civilians and 1,300 security force personnel lost their lives due to violence. In the end, the Sri Lankan government was able to destroy the Tamil Tigers and kill their leader, Velupillai Prabhakaran.
While the Sri Lankan example of successfully tackling the extremists sounds optimistic, the militancy in Pakistan is much more complicated and multifaceted to be dealt decisively in the short term.

Almost 37,000 violent deaths due to communal, sectarian, and political strife in a mere span of eight years suggest that somewhere something has gone awfully wrong in Pakistan. There are at least two ways to react to such dismal circumstances. One can either look for scapegoats and blame others for one’s misery; or one can indulge in much needed introspection.

Let me first focus on scapegoats. Many would argue that the sorry of state of affairs in Pakistan is because of the United States’ misadventures in the region. There is some truth in this statement. The United States and its allies have embarked on a futile, immoral, and (many would argue) illegal war in Afghanistan that has now spilled into Pakistan. Thousands have died on both sides of the Durand Line as a result of the Afghan war.

Then there is India, which is blamed for all things bad about Pakistan. India is often accused of arming the militants in Balochistan, helping the Taliban against Pakistan in Afghanistan, and recruiting and training of suicide bombers. And last but not least, Israel is also suspected of many wrongdoings. The Karachi police’s recent claim of recovering Israeli firearms from the militants is one such example.

I wonder what would happen if the (assumed or genuine) external catalysts of violence were to disappear completely from Pakistan. If the causes of violence are all external to Pakistan, peace should then return in their absence. However, the communal, sectarian, and ideological fault lines run deep in Pakistan. The external agents may have some role in instigating violence, however, the longstanding domestic discords are behind the anarchy that prevails in Pakistan. After all, the sectarian violence between the Sunnis and Shias predates the partition in 1947. Since 1989 alone, sectarian violence has claimed the lives of 3,600 Pakistanis while injuring another 7,700 (see the breakdown in the table below). 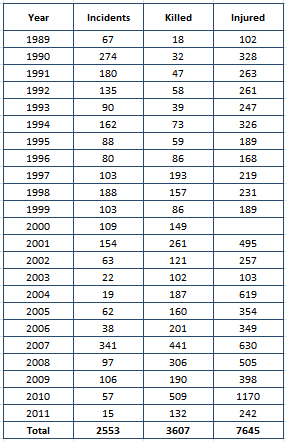 While we may be tempted to blame others, I believe the fault lies within. I have been a witness to the aftermath of such clashes that ended with death and destruction. In July 1992, bullets fired from a mosque killed eight in an Ashura procession in Peshawar City. Some of the dead were Sunni Muslims who were part of the Ashura procession but were mistaken for Shias by the militants.

Soon after the attack, armed tribesmen from the neighbouring tribal areas took Peshawar hostage. For days they destroyed private property and desecrated Shia graveyards by throwing grenades and firing bullets on headstones. Four more died in clashes in the next two days. Both Shia and Sunni mosques were attacked and damaged. The Army was called in three days later to restore law and order. As the army rode into Peshawar, the tribesmen retreated to safe havens in Pakistan’s tribal areas.

In the weeks, months, and years that followed no attempt was made to bring to justice those who killed, destroyed property, and took Peshawar hostage. The then Prime Minister Nawaz Sharif made bold statements against the sectarian strife in the Parliament, but nothing concrete materialised.

For years Pakistanis have ignored sectarian violence because most victims of sectarian violence belonged to religious minorities. The religious extremists took majority’s apathy as an endorsement of their murderous acts and broadened their targets to include even those Sunni Muslims who did not conform to their absolutist views about faith, society, and the State.

Soon no religious group would escape religious violence in Pakistan. The 57 victims of suicide bombing at Nishtar Park (Karachi) in April 2006, the 20 SSG commandoes killed in September 2007 in Tarbela-Ghazi, the 50 worshippers killed during Eid prayers in Charsadda in December 2007, the 50 devotees who died in the suicide bombing at Data Darbar in July 2010, and the 50 who died during Friday prayers in Jamrud on August 19 are all examples of religious terrorism against the Sunni majority in Pakistan.

Nothing is sacred in Pakistan any more. Even though fighting is prohibited during Muharram, however year after year dozens fall victim to sectarian violence during the sacred month. Mosques are supposed to be the symbol of peace and refuge in a Muslim society; instead they have become the target of choice for suicide bombers. Ramazan is supposed to be the month of prayer, spirituality and forgiveness; however, recent carnage in Karachi during Ramazan has drowned citizens in grief and despair.

For Muslims, Friday is the day of prayer. It is the day when Muslims are asked to forgo commerce and join others in a congregational prayer. Yet, Friday has become the most violence prone day in Pakistan. In 2010 alone, 43 per cent of the 1,547 victims of bomb blasts were killed on a Friday. In Balochistan and Punjab, Fridays accounted for almost 60 per cent of all bomb blast-related deaths. 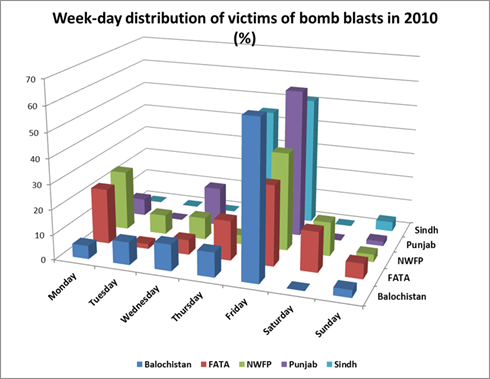 It is hard to argue with the fact that Pakistan is at war with herself. While her enemies must have some hand in fanning the flames, however, the communal, sectarian, and ideological fault lines are now threatening the viability of the State and society.

Almost 64 years ago Pakistan was a dream shared by the Sunnis and Shias, Balochs and Sindhis, Punjabis and Pushtuns, Bengalis and several others. The same dream is now split along the communal, sectarian, and ideological fault lines.

From this rubble of collapsed identities a new nation has to emerge with a common purpose and shared destiny. A nation not defined by common descent, history, culture, language or belief, but a nation characterised by the diversity in beliefs, cultures, and languages.

This is a much bigger challenge than the one faced in 1947 when there was a shared dream.