From the banks of river Nile to the sand dunes of Kashgar Prefecture, Muslims were perceived as one people by the poet philosopher Muhammad Iqbal. All other manifestations of a person’s identity were deemed irrelevant. The unity in faith (madhab) was considered sufficient to define a people overriding all differences in race, colour, and creed.

In Pakistan, a notion of Pan-Islamism has been percolating throughout the state-sanctioned curriculum delivered to students as young as seven years old. The not-so subtle message portrays the nation state as a failure and offers the notion of Muslim Ummah (one community) as an alternative. The curriculum and public discourse depicted Muslims as one indivisible entity impervious to national, cultural and tribal influences.

As a child growing up under General Zia’s martial law, I struggled with the gap between the rhetorical Muslim identity and the geo-political realities that unfolded around me. For instance, I could not understand why the Muslims in East Pakistan separated from the Muslims in West Pakistan after a gory struggle to create a nation state, Bangladesh.  I struggled to comprehend why Iraqi Muslims fought a war with fellow Muslims in Iran or much later why Arab Janjaweed militias committed genocide against the non-Arab tribes of Darfur.  And as of late, why Muslims lined up other Muslims near Quetta, Balochistan, and killed them in cold blood.

The above examples of Muslim-on-Muslim violence raises several questions about religion’s ability to define and shape one’s identity. If religion were to be the only locus of Muslim identity why were then Muslims killing other Muslims. If Muslims were one people, as Iqbal had suggested, why could they not resolve disputes peacefully. Could it be true that religious homogeneity is not sufficient to deter intra-communal violence? Could there be several other manifestations of one’s identity? And can culture, caste, creed, or colour be equally instrumental in shaping one’s identity as religion is?

Consider that one can be simultaneously a Muslim and a Shia; an American and a Pakistani; a father, a son and a husband; a doctor and a professor; and a citizen and a human. Should one then follow Iqbal’s notion of Ummah and call oneself a Muslim while negating all other distinguishable traits, or should one embrace Baba Bulleh Shah’s iconoclasm in which he sought an identity devoid of faith, creed, class, and culture.

If it were a question of an individual’s identity, one may be able to wrestle through the complexities of self and conjure up an answer. But what to do when it concerns not one person but over a billion? From the western stretches of Africa to the Eastern most parts of Indonesia, the billion-strong Muslims are stretched over continents speaking thousands of languages following millions of customs. How would one go about carving out a single, definitive and indivisible identity for such a diverse people?

If we were to ask Muslims to characterise themselves, what loci of identity would they use? Will they confine their identities to religion or will they dig deeper into the sectarian fissures to find their distinctive identities. Will they see themselves belonging to nation states or will they identify more with their cultural or tribal affinities. A recent poll by Pew Research Centre may be able to help us find answers to some of these questions. 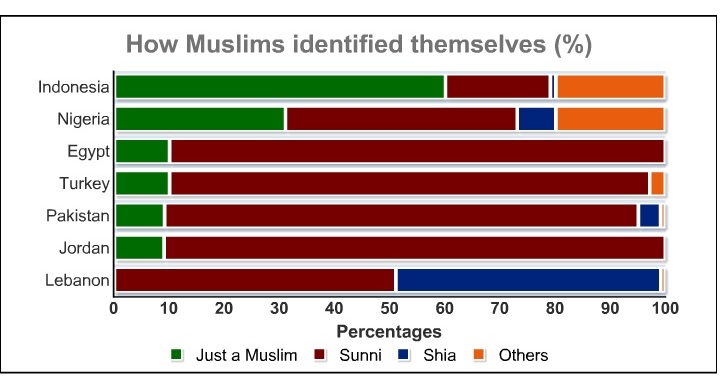 It is quite possible for one to have obtained a different breakdown had the survey question been posed differently where the respondents were not compelled to choose between Sunni and Shia. However the fact remains that when 7,000 Muslims were polled across seven Muslim majority countries fewer than one in five chose to reject a sectarian identity.

In the same Pew survey when Pakistanis were asked to choose between a national identity as a Pakistani and an ethnic or tribal identification, an overwhelming 93 per cent opted for the national identity. These results are perhaps the outcome of mass radicalisation orchestrated during the 11-year rule of late general Zia when schools, pulpits and print and electronic media were galvanised to inculcate an elevated sense of religiosity and jingoistic fervour.

In Pakistan, one often finds nationalistic and religious aspirations adopted into names to act as formal instruments of identity. Last names such as Shirazi or Hijazi are examples of how one attempts to build a bridge to a racial or ideological past by explicitly incorporating geography into one’s name. Even a hierarchy of religious fervour can be unambiguously incorporated into the names to indicate the strength of religious identity. Honorifics such as Haji and Al-haj are obvious proxies of formal graduated religious identities.

Non-religious identity references have also been incorporated into names. The most common are the tribal/cultural entities examples of which are Shinwari, Gakhar and Soomro. The intellectual ‘liberal’ elite has also adopted the hierarchal systems of identity where a variety of honorifics such as professor, doctor, engineer or advocate are used to carve out unique identities.

Given that most Muslims in South Asia are converts from Hinduism, it is interesting to note that there are hardly any references in their names pointing to their immediate religious past. Most have somehow leapfrogged to remote geographies to serve as their ideological and spiritual geocodes.

The diversity of views about identity may not necessarily be a source of conflict. However, it has become one in Pakistan and other Muslim majority countries. Those who aspire for a religious identity are striving for a return of an emirate or a caliphate while others are struggling to build liberal democracies.

This debate should be resolved by ballot and not by bullet.