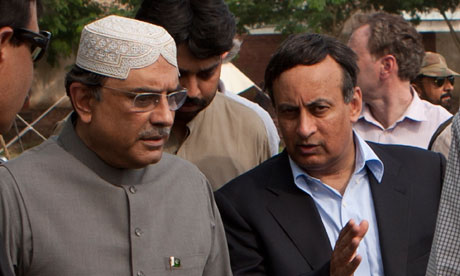 While we may never know who indeed authored the ever so memorable memo, which has cost former ambassador Husain Haqqani his day job, we do know that President Asif Zardari has been a prolific writer who has contributed several op-ed pieces to fine publications, such as the Washington Post and the New York Times.

Within days of Benazir Bhutto’s tragic death, President Zardari published the first of several op-ed pieces, which have continued to appear in the international press at opportune times. Writing in the Washington Post on January 5, 2008, President Zardari called for the “enemies of democracy and tolerance” in Pakistan to be “exposed and marginalised.”

The byline clearly identifies him as the author of the article. However, given his demonstrated eloquence in English, which is reflected in his interviews, one can’t help but wonder if President Zardari indeed was the author of these op-eds in the American and British newspapers.

Given the severity of challenges faced by Pakistan, it indeed appears frivolous to spend time and energy investigating the authorship of certain op-eds that identify President Zardari as the author. I will, however, argue that given the nation is fixated on the authorship of the controversial memo, this may be the only time when one could highlight issues related to plagiarism and ghostwriters in Pakistan.

What sparked my interest in these op-eds is the lack of consistency about certain facts. For instance, in the op-ed published in the Washington Post on January 5, 2008, President Zardari claims that he “spent more than 11 years in Pakistani jails.” However, writing in the same publication on September 4, 2008, President Zardari claims that he has “spent nine years in prison.” How can he be confused about the time he spent in prison? If he were the author of these op-eds he would have remembered the time he spent in prison without ever being convicted of any wrongdoing.

President Zardari is not the only head of the state who has contributed op-ed pieces to influential newspapers in England the United States. Former US President Bill Clinton and the British Prime Minister Tony Blair have also done the same. It may very well be true that Messrs Clinton and Blair received help with their drafts as well. However, given that both Clinton and Blair are native speakers of English language, graduates of reputed institutes of higher learning, and practicing lawyers in the past, one could see them being the authors of the op-ed pieces that bear their names.

President Zardari however lacks such endowments where his language proficiency, education, and past professional achievements bear no hint of the authoring abilities illustrated in the op-eds that bear his name. Conversely, one can also argue that he may have been hiding his creative writing skills all along for an opportune time later in his life.

Many to this day remember President John F. Kennedy’s memorable inaugural speech in 1961 in which he famously said “ask not what your country can do for you – ask what you can do for your country.” While President Kennedy uttered these words, he never wrote them. In fact, Theodore C. Sorensen (Kennedy called him his intellectual blood bank) is credited with the penning of that famous phrase.  If President Kennedy and others can use speechwriters, why can President Zardari not have ghostwriters, should he need one?

The question, however, is to determine if there exists a difference between speeches and writings.  Many would argue that retaining a speechwriter is permissible, because delivering a speech does not imply that the speaker is also the writer. However, claiming authorship of an article leaves no room for speculation.

I put this question to the New York Times Magazine writer, Randy Cohen, who writes the weekly ethicist column. According to Cohen, “to deliver a speech someone else has written does not deceive your listener. But to sign your name to a piece of writing is more than to endorse those ideas; it is to claim authorship. As far as I’m concerned, if you put your name to a piece of writing you did not actually write, that is indeed plagiarism.”

Again, I am not suggesting or implying any wrongdoing on President Zardari’s part, but instead I am addressing the larger issue of what due diligence should be expected of the newspapers that publish op-eds from heads of state.

Even in a speech one cannot repeat words of another author without attribution. The Dean of medicine at the University of Alberta, Professor Philip Baker, learnt the hard lesson recently when he, while speaking at a banquet, plagiarised a speech by Dr. Atul Gawande, who is a surgeon and writes for The New Yorker. Prof Baker realised his mistake and offered an unconditional apology for the serious lapse in judgement. He also had to step down as the Dean of medicine.

One cannot expect apologies from those accused of plagiarism in Pakistan where the practice is common in academia amongst students and instructors alike. In fact, plagiarism is so prevalent in Pakistan that the Higher Education Commission maintains a black list of plagiarising faculty members on its website that lists a dozen-odd plagiarist professors. Even one Ph.D. thesis by a Dean of Islamic Studies was found to be the fruit of plagiarism.

Should President Zardari need help with writing op-eds, he is in good company. The ex-ambassador Haqqani and his wife Farahnaz Ispahani, Sherry Rehman, Farhatullah Babar, and High Commissioner Wajid Shamsul Hassan have been accomplished journalists and writers who could assist the President with his writings. He also enjoys unqualified support by authors and lobbyists in Canada and the United States.

Tarek Fatah, a Pakistani-born Canadian writer, has been writing op-eds in support of President Zardari in Canada. “In the West’s war against terrorism, Mr. Zardari is probably the only politician in Pakistan who has the guts to identify the cancer of jihadi extremism and order the Pakistani army to root it out,” wrote Fatah in December 2009. Fatah also defended Husain Haqqani in the aftermath of the Kerry-Lugar Bill and accused the army of starting a campaign in 2009 to “to dislodge Mr. Zardari and his ambassador in Washington, Husain Haqqani.”

And who can forget the May 2010 op-ed in the Wall Street Journal by David B. Rivkin Jr. and Lee A. Casey (who are Washington, D.C.-based attorneys and had two stints at the US Department of Justice) in which they accused Chief Justice Iftikhar Mohammed Chaudhry of being “the leading culprit in an unfolding constitutional drama.” As the Supreme Court reviewed NRO, Messrs Rivkin and Casey jumped to President Zardari’s defence and wrote: “If Mr. Chaudhry succeeds in ousting Mr. Zardari, Pakistan’s fledgling democracy would be undermined and the judiciary’s own legitimacy would be irrevocably damaged. Rule by unaccountable judges is no better than rule by the generals.”

While I am very willing to accept that the op-ed pieces in the Washington Post, CNN, New York Times, and other western news outlets may indeed have been penned by President Zardari, what I am not willing to accept is the fact that in times of crisis he chooses to speak directly to American taxpayers rather than to the people of Pakistan. May it be the death of Benazir Bhutto in December 2007 or her birthday in June 2009, or the Mumbai attacks in November 2008, or defending his one year in the president house in January 2010, time and gain he chose to communicate with the powerbrokers in the West.

For a change, I would like President Zardari to communicate with his own people first, even if it requires him to seek help from ghostwriters.