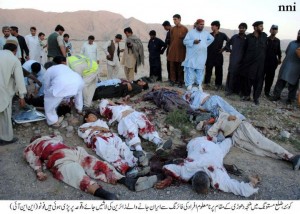 Recently two videos have been released showing the slaughter of Shia Muslims at the hands of the ISI-SCP backed Sipah-e-Sahaba/Lashkar-e-Jhangvi terrorists.

The first video of the Mastung massacre (September 2011) has been released by the SSP-LeJ media cell in which ISI-SSP produced Jihadi songs have been used as  a background music to the execution-style murder of 27 Shia Hazaras in Mastung, Balochistan.

This is an incredibly horrifying video of LeJ-SSP terrorists (extremist Deobandis brainwashed by Saudi-ISI Jihad Enterprise) murdering Shia travellers, which would leave your heart in pain. Discretion is advised.

Update: Only yesterday, 1 December 2011, yet another Shia (a Kurd Baloch) namely Gohar Aziz Kurd S/o Mukhtiar Aziz, aged 20 year was killed in the Mastung market by ISI-backed LeJ-SSP terrorists. This news too was blacked out by ISI-influenced Pakistani media.

The second video of three Shia scouts’ massacre in Karachi is based on a CCTV footage released by Huriyat News. In this video, the connivance of Pakistan’s security forces (army rangers) with SSP-LeJ terrorists can be clearly seen. This video too was completely blacked out by both right wing and urban fake liberal affiliates of Pakistani establishment. 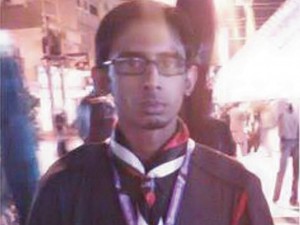 Five beheadings and a funeral