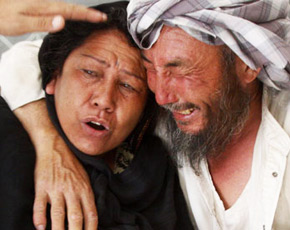 Pakistanis of all political and religious persuasions are equally enraged by the tragic death of their soldiers caused by an indiscriminate air attack by the Nato forces. Pakistani soldiers, stationed at a border post in Mohmand region, were attacked by Nato planes and helicopters killing 24 and injuring several more.

Several politicians and citizens in general are enraged over the violation of their sovereignty. While this outburst of grief is understandable and very much justified, one wonders why other acts of violence against ethnic and sectarian minorities in Pakistan have not stirred the same outpour of grief and anger that we witness today. Could it be true that we are enraged only when others stand accused of violence against us, but when its Muslim-on-Muslim violence, we are much complacent.

The purpose here is not to undermine the ultimate sacrifice offered by Pakistani soldiers, who continue to lay their lives in hundreds while defending Pakistan against the militant fundamentalists. The motive here is to point out the lack of or, at best, muted response to the senseless violence committed against Ahmadis, Balochis, Christians, Shias and other minorities in Pakistan.

It was only in September 2011 when 29 Shias from Quetta’s Hazara community were killed in a premeditated attack. They were travelling to Iran in a bus that was intercepted near Mustang by armed militants who killed 29 while gravely injured several others. Compared to the anger and grief over the death of 24 soldiers, the reaction to Hazara murders has been mute at best. The list of political and community leaders from Punjab and Sindh who visited Quetta to condole with the Hazaras is very short and did not include any mainstream politician. Not even 50 students from a Punjab-based University marched in solidarity with the Shias of Quetta even when Shia academics were being killed by the unknown assailants (Professor Danish Alam was murdered earlier today). However, thousands marched in Lahore today for the slain soldiers while being led by their professors.

The State’s indifference to the plight of Hazaras drove Syed Nasir Ali Shah, a legislator belonging to the ruling Peoples Party, to stage a month-long sit-in in front of the Parliament. It took Prime Minister Yousaf Raza Gilani a month to react to the protest staged by a member of his own party. On the other hand, the Gilani government reacted with a sharp rebuke to Nato within hours of the attack on troops in Mohmand region.

Hundreds of Shia Hazaras have fallen victim to the terrorist violence perpetrated by the extremist elements belonging to hardline sects of Islam. While many have been killed in dark alleys (who jo tareek raahon main maray gaey), the Hazara community is striving to ensure that the victims of sectarian violence are not forgotten. The community has prepared a list of 435 victims who have been killed since 1999 in sectarian violence. The bulk of killings took place in the past few years. More than 90 Shias from Hazara community have been killed since July 2011 alone.

The list of victims deserves a considerate read and reflection. Hazara community’s sacrifices are indeed supreme. The list includes children as young as five, as well as the elderly. The very unfortunate victims include father and son pairs who met violent death on the same day. A mother and daughter pair met the same fate. Hundreds of dead are young students.

The targeted attacks including bomb blasts have caused havoc in the Hazara community. What to say of a city where places of worship are the most hazardous sites. The July 2003 attack at the old Imam Bargah in Quetta killed 51, including 5-year old Ali Akbar. A year later in March, an attack on the 10th of Muharram killed 36 members of the Hazara community. In September 2010, when Shias marched in Quetta in solidarity with the displaced Arabs, they were rewarded with an attack that left 62 Shia Hazaras dead.

The Hazara community is not safe even in the cemeteries. In May 2011, militants attacked visitors at the Bahisht-e-Zahra cemetery in Hazara Town and killed seven Shias. Even hospitals fail to offer refuge to the community. An attack in April 2010 in Quetta’s Civil Hospital left six Shia Hazaras dead. Earlieri n July 2008, when the community sought legal redress, their lawyer, Ghulam Mustafa Qureshi, was assassinated. Several Hazara police officers, including 13 young cadets, have also become victims of targeted sectarian killings.

If Pakistan’s civil and military leaders are serious about addressing the grievances of the Hazara community, they could take the first step by visiting the two cemeteries in Quetta, Bahisht-e-Zahra in Hazara Town and Bahisht-e-Zainab on Alamdar Road, where the Hazaras have buried over 350 victims of sectarian violence. These cemeteries are a testament to the courage and resilience of a community whose right to live in peace has been violated in the presence of a democratically elected government.

Many in Pakistan believe that the Nato’s attack in Mohmand is an attack on Pakistan’s sovereignty. If sovereignty implies “having supreme, independent authority over a geographic area” then Pakistan has lost sovereignty in most of Balochistan, including Quetta. Hundreds of Shia victims are proof that the State has lost control of Quetta.

The State restores law and order in Quetta. It has to reestablish its writ neighbourhood-by-neighbourhood, street-by-street. It can start with Saryab Road where more than 50 members of Hazara community have been killed in several attacks over the past few years.

Meanwhile Pakistanis have to learn to embrace all victims of violence as equals. While we grieve for our fallen soldiers, we should do the same for the civilian victims of sectarian violence. If our anger and grief is determined not by the innocence of the victims but by their ethnicity and sectarian affiliations, we will continue to drift towards even a more violent future.

Murtaza Haider, Ph.D. is the Associate Dean of research and graduate programs at the Ted Rogers School of Management at Ryerson University in Toronto. He can be reached by email at murtaza.haider@ryerson.ca