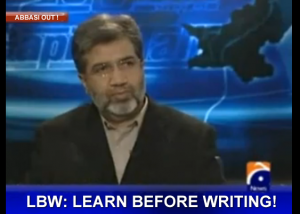 In his yet another epic report, Pakistan’s apex investigative journalist, Ansar Abbasi has used “sources” and “wikipedia” to talk about  Pakistan making “extraordinary progress by developing one of the world’s smartest nuclear tactical devices”. A military and intelligence devoid of any, cannot even repair its F-16s and depends on the manufacturer of the planes for parts, can for sure be expected to make the smartest tactical devices. Maybe the smartest tactical device Pakistan has are its suicide bombers who have wreaked havoc.

This is yet another attempt by the Best Army and Best Intelligence Agency in the world to give false sense of superiority to our “ghairat brigade”.

ISLAMABAD: Pakistan’s nuclear programme has made some extraordinary progress by developing one of the world’s smartest nuclear tactical devices, it has been learnt.
According to a western diplomat, the former dictator and the then President General Pervez Musharraf, during one of his meetings with US officials, had deemed it proper to convey it to the Americans what Pakistan possessed and how the country’s nuclear scientists had secured the defence of Pakistan.
The diplomatic source said that New Delhi also knows what Pakistan has produced and what is really unmatched. The Indians got this source said and believed that Musharraf intentionally conveyed this to the Americans so that the country is not treated by the US like Afghanistan and Iraq Pakistan is neither a signatory to NPT nor CTBT, however, it has unilaterally decided to use its nuclear programme only as deterrence against any foreign aggression.
After becoming the target of the Western capitals particularly Washington, which have been unleashing all sorts of propaganda against Pakistan’s nuclear programme, Islamabad has developed one of the most credible and foolproof command and control systems for its nuclear programme. The US authorities have acknowledged the credibility and security of Pakistan’s nukes.
Wikipedia quotes a Washington-based science think tank as saying that Pakistan is increasing its capacity to produce plutonium at its Khushab nuclear facility. The website said that the estimated Pakistani nuclear weapons was probably in the neighbourhood of more than 200 by the end of 2009.
It, however, adds that the actual size of Pakistan’s nuclear stockpile is hard for experts to gauge owing to the extreme secrecy, which surrounds the programme. Pakistan’s nuclear programme was started by Zulfikar Ali Bhutto while the country conducted its nuclear test on May 28, 1998 during Nawaz Sharif’s tenure.