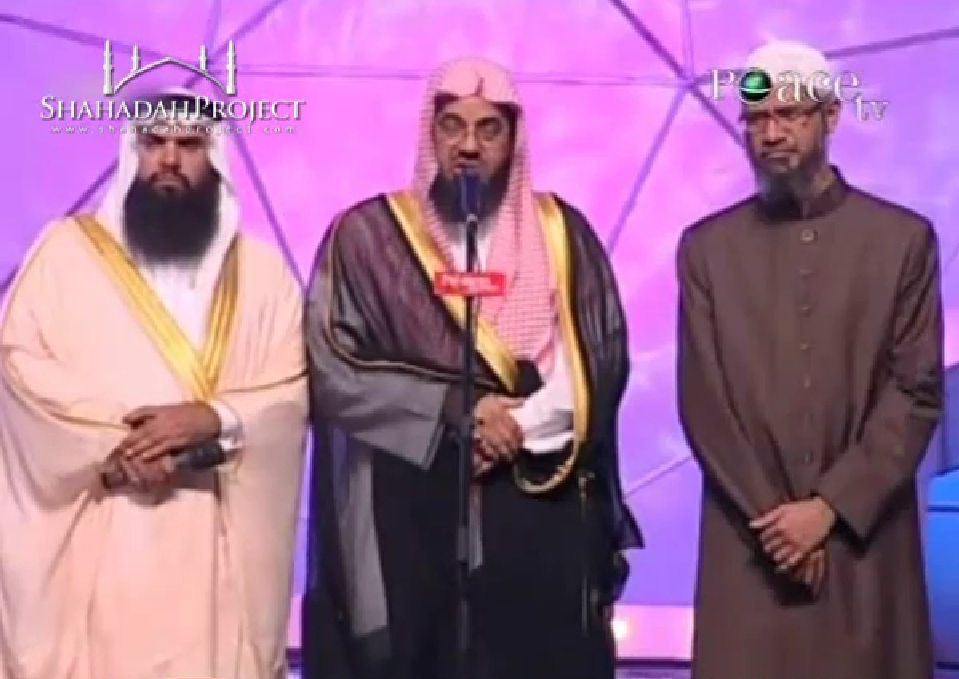 With billions of petro dollars to fund their global clout, the Saudi lobbies have simply brought off opposition to their continued efforts to spread Wahabism worldwide.  In failing to confront Wahabism, North America and Europe remain paralysed by a combination of political correctness and a racism of lower expectations while in muslim majority countries, the Saudi lobbies have used the Jamaat-e-Islami and the Ikhwan to infiltrate every level of the State.  Together this ensures that the relentless radicalization of millions of urban, upper and middle class Muslim youth is going on at a relentless pace in only Pakistan, India, Middle East, Egypt, Somalia, Indonesia and Malaysia but also in North America and Europe through the concerted efforts of Saudi-funded Islamic TV channels. Examples of such channels include: Dr. Zakir Naik’s Peace TV (English and Urdu), Islam Channel, Iqraa TV and a few others. 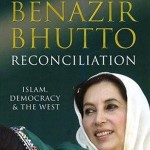 In her book titled ‘Reconciliation’, late Benazir Bhutto offers a bold and critical description of Wahhabi Islam and its home, Saudi Arabia. She recounts the history of Wahhabism, with its repeated destruction of the mosques, monuments and lives of other (moderate) Sunni sects, as well as its war on Shiites. According to Fareed Zakaria, given that Saudi Arabia has been a generous patron to Pakistan, it is striking that Bhutto was willing to write things that would surely have caused her difficulty had she become prime minister.  This threat materialized in reality with the Saudi regime actively opposing the democratic PPP-lead government and its President Asif Ali Zardari as evidenced by both wiki leaks and this New York Times article which both highlight how the Saudis prefer dealing with the ISI and pro-Taliban politicians instead of those like the PPP who have the mandate of the nation.

The very fact that Benazir Bhutto and several other leaders and workers of her party (PPP), and thousands of innocent Pakistanis, Afghanis and nationals of other countries of diverse faiths, sects and ethnicities  have been martyred by the radicalised Jihadis is an indication of the violent and intolerant Salafi-Wahhabi ideology at play.

It is possible to identify three goals of the Saudi-funded Islamic TV channels.

Zakir Naik and dozens of his clones currently being produced by the Saudi-funded Peace TV network are a classic example of how thousands of moderate Muslim youth, women and men, are being subconciously and silently being radicalized by Saudis.  Through a sectarian, decontextualized and selective misinterpretation of the Quran and the Hadees, Zakir Naik is creating divisions and hatred not only between Muslims and non-Muslims (Hindus, Christians, Jews etc) but also between different sects of Islam. Naik’s bigoted propaganda and insensitive diatribe against Judaism, Hinduism, Christianity and also against Sufi, Shia and Ahmadi sects of Islam is completely opposite to the tolerant and the inclusive practices of the Prophet Muhammad. 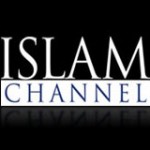 Similarly, the Islam Channel is known for promoting a narrow sectarian version of Islam wiping out moderate Sunni Muslims and Shia Muslims from its programs and discourse. According to a media commentator:

What Islam Channel has done is to give an un-due prominence to Islamist voices that represent only a small minority of British Muslims. This over-representation has also led to other voices “ for instance from the UK’s Shia community or from non-Islamist Muslim groups” being under-represented on the channel.

Many of its speakers are Islamist extremists from organisations like Hizb ut-Tahrir who use the channel to promote intolerant and bigoted interpretations of Islam. Others are Wahhabi graduates of Saudi universities who have denied the Holocaust and promoted hatred of Shia Muslims. Other presenters are Islamists who have been suspended from their jobs in government due to their extremist statements or who are from organisations that the government has broken ties with due to their leading members’ alleged support for terrorism.

One of the most worrying aspects of Islam Channel is the promotion of its extremist agenda via the views and politics of its presenters. Amongst these have been the Wahhabi cleric and anti-semite Yasir Qadhi, and Azad Ali of the Islamic Forum Europe (IFE), who was suspended from his position of civil servant earlier this year, following the publication of extremist jihadi literature on the IFE blog. 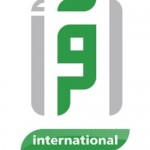 Iqraa TV channel is yet another Saudi-funded channel aimed at redefining an Islamic identity among Arab viewers. The channel is owned by Saudi billionaire Sheikh Salah Kamal’s Arab Media Corporation.

According to Abu Haiba: Two easily identifiable media discourses in the Islamic media environment today are: the visibly Saudi-influenced one, which are clearly embodied by the Salafist ideology. Though narrow in their scope, Salafi stations focus on rituals and spirituality, where women and music are virtually non-existent on the airwaves. Furthermore, political quietism is another characteristic of these stations. However, there is also presence of relatively moderate, more refined and subtle Saudi-Salafi channels which are characterized by a contradiction of statements both in style and content stemming from their ostensibly moderate inclinations. Some shows have expanded their range of issues covered, beyond Islamic laws and spirituality. For example, they not only addressed issues pertaining to ethics and values, but also featured women as anchors, guests, or among the general public presenting media stories. However, political quietism and wiping out of diverse sects of Islam remains their key characteristic. 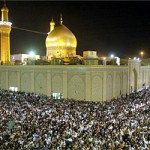 Another example of an exclusive and intolerant agenda of such TV channels is their policy of wiping out Karabla and Imam Hussain from their transmission even during the first ten days of Muharram when Muslims across the world, notwithstanding their particular sect or belief, mourn the great sacrifice of Imam Hussain, the grandson of the Prophet Muhammad. Millions of Sunni and Shia Muslims in India, Pakistan, North America, Europe and other countries pay homage to Imam Hussain, which is also evident on moderate Islamic channels such as Noor TV, ARY QTV, Hidayat TV, Takbeer TV etc.  However, the mention of Imam Hussain andthe  family of the Prophet is completely censored on Saudi-funded Peace TV, Iqraa TV and Islam Channel. It must be acknowleged that the great sacrifice of Imam Hussain has been acknowledged and apprecaited by Muslim and non-Muslims alike who treat the revered Imam as a symbol of humanity and truth.  All Islamic TV channels are paying homage to Imam Hussain except Saudi-funded, OBL & Yazid apologist Zakir Naik’s Peace TV and other Saudi-financed channels.  While both Muslims as well as Hindus, Christains, Sikhs, Jews etc. respect the timeless Karbala paradigm, the Saudi hate lobby, lead by the likes of Zakir Naik ensures that Imam Hussain is ignored or that the tyrannical caliph Yazid who murdered the Prophet’s family is eulogized.

A similar censorship is enforced by the Saudi-funded channels on the birthday of the Prophet Muhammad (known as Mawlid or Eid-Milad-un-Nabi), which is observed by a dominant majority of all Sunnis and Shias except those belonging to Saudi-Salafi interpretation of Islam. From a Saudi-Wahhabi perspective, the majority of moderate Sufi/Barelvi Sunnis are ridiculed as mushrik (polytheists) and Shias are reduced to kafir (infidels). 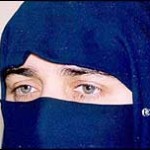 Such Saudi-funded TV channels are also being facilitated by other pro-Saudi preachers such as Dr. Farhat Hashmi and other Taliban and Al Qaeda apologists. Previously activists and scholars such as Sarah Khan, Tarek Fatah, Farzana Hasan and Raheel Raza have written on the potential threats posed to peace, tolerance and Islam itself by pseudo-Muslim scholars such as Zakir Naik and Farhat Hashmi.

To see the creeping Talibanization and sympathy for Al Qaeda initiatives Farhat Hashmi, refer to Salon’s “The Taliban’s ladies auxiliary” , this Daily Times report and the a collection of various newspaper articles, reports and comments that have has been compiled by LUBP.  These accounts painstakingly highlight how Wahabi proselytizers have made significant strides in creating rejectionist and misogynist mental ghettos amongst muslim communities worldwide, especially in Canada and Britain.

The progenitors of Zakir Naik and Farhat Hashmi are 20th century ideologues like Syed Qutb, Abul Ala Mawdudi and Hassan Al-Banna.  The last is the founder of the Muslim Brotherhood/Ikhwan-ul-Muslimeen and grand-father of Tariq Ramadan, a Swiss acadamic whose subtle Wahabi-lite activism needs greater intellectual scrutiny.  These are the ideologues who have been the biggest promotors of a global Wahabist agenda that rejects both moderate muslim opinion as well as the rights and values of other faith traditions.  This Wahabist agenda justifies the horrendous violence against both muslims and non-muslims.  It is the reason why the many brainwashed upper-middle class muslim urbanites of Europe and North America are completely silent about the violence that has claimed the lives of tens of thousands of muslims from Somalia to Indonesia.  This is the specific violence committed by Al Qaeda and its Taliban, Jamaat-e-Islami, Sipah-e-Sahaba and Lashkar-e-Jhangvi affiliates while moderate muslims, especially the Ahmedi, Sufi, Sunni and Shia sects are the primary victims of this violence.

I am painfully aware of the fact that millions of Muslims not only in India and Pakistan but also in the US, Canada, UK and other countries across the world are allowing themselves and their families to be gradully brainwashed by watching the Saudi-Ikhwan sectarian propaganda of such TV channels.

It is a sincere warning to all those persons who are allowing themselves and/or their family members to be exposed to and brainwashed by the Saudi-funded TV channels: you might have a future Faisal Shahzad, Major Nidal Hasan or Muhammad Ata currently being groomed right within your own house.  Through your subscription or donation to the Saudi-funded TV channels, you may be, at least indirectly and subconsciously, contributing to the spread of Al Qaeda, Taliban and Saudi-ization of moderate Muslims. It is time to reflect on ways to discourage and impede the ongoing Saudi-ization (Wahhabi-ization) of moderate Muslim youth.