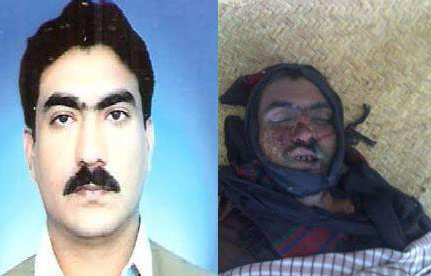 Though our memories of Pakistan Peoples Party are not pleasurable enough, but the way it has been plowed by a common adversary, the security establishment and discredited by right wing sycophants in politics, media and judiciary, we still have our hopes from it, if any good can be extradited to Balochistan by the coloniser state of Pakistan, it will be brought in by PPP. And it was the reason, I had been Following LUBP, a blog with PPP flag hoisted over it.

To my surprise, I have never found a single post being apologetic to the whisht of PPP over the Army’s savageries in Balochistan, and had often excoriated numbing statements by the Govt officials reverberating security establishment’s tortures and distortions. The situation in Balochistan has not changed yet, the only reason Balochistan is remembered in mainstream media reports and documentaries is for its resource rich soils, formalnesses of Human Rights reports and political circus happening there.

Last night was listening to BBC Urdu news bulletin, which has reported the news of mutilated dead bodies founded and identified as Jalil Reki, information secretary of BRP. But mainstream Pakistani media was covering regular news with an updated from Karachi where a husband was killed, cut into pieces and boiled by his wife. Television networks showed gruesome footage of the human flesh in a bowl ready for the stove. But news of the recovered dead bodies were blocked out from the news.

While social networks were loaded with the excruciating updates of Baloch cyber activists, blogs reporting on Balochistan (mostly blocked in Pakistan by PTA) had posts on Reki’s martyrdom with reaffirmation of their resolve to achieve their right of self determination and decolonise their motherland. While tweeples from Pakistan other regions were cheering the news of Sherry Rahman appointments as US ambassador as a replacement of Husain Haqqani. Pakistani blog-space too is filled with routine stuff, here too the news from Balochistan were unheeded as usually.

When I returned to LUBP, it too had followed the trends and was fuddled with the stuff about Haqqani’s exit and Sherry’s emerging to the scenes. Was saddened but not surprised as have observing this change in LUBP policy since last few months, and googling stuff regarding security establishment’s brutalities and killing and dumping policy in Balochistan has LUBP posts few months older. Though some posts have a mention to what has been happening there in Balochistan, but the usual sternness, a mark of LUBP has been vanished.

It seems LUBP has joined PPP in drawing a blank on genocide of Baloch political activists and their killing and dumping by the patriotic elements Pakistan Army and Frontier Constabulary and following realpolitik. I Congratulate LUBP on their new avatar, and estranging Balochistan of their vision of Multicultural and Progressive Pakistan.