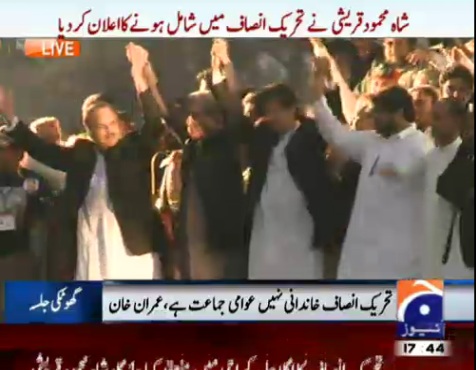 Congratulation, the newborn Judas’s name is also included in the list of ‘Clean Politicians’ compiled & released by PTI’s Kaptaan Imran khan. So, eventually Kaptaan has got one more big turn coat and opportunist in PTI’s fold after a lot of struggle of 16 years.

Shah Mehmood Qureshi fits the profile of what Kaptaan expects a PTI officer to be: intellectual dishonest, denier who can ignore facts and political opportunist hired by high office. He has all the qualities and experience to offer, as Qureshi’s political oppertunism has seen major shifts, jumping from different Pakistan Muslim League (PML) factions to the Pakistan Peoples Party and now the PTI.

Here is a Kaptaan’s list of ‘Clean Politicians’, which has included some very famous & well known [clean] names:

Shahid Bhinder (formerly of PML-Q and Law Minister under Musharraf)

Khwaja Khan Hoti (formerly of the PPP and ANP, and former Minister of Social Welfare)

A notable former Jamaati in the top leadership is PTI Vice President Ejaz Chaudhry who was ejected from the JI after facing allegations of corruption. He is now the PTI’s advisor on religious affairs and Imran Khan’s point person in the Punjab. Chaudhry is also in charge of PTI’s youth wing, the Insaf Students Federation. Under him, ISF activists have been sporting bandanas reading “ISF al-Jihad.”

The PTI remains close to former MMA partners the JI and JUI, often jointly organizing rallies. In 2009, Imran Khan heaped praise on the JI’s then leader Qazi Hussain Ahmed at a seminar at the Lahore Press Club, referring to Ahmed as his “brother.”

Shah Mahmood Qureshi – is not only the man for all seasons, but also seems the patient who is suffering from short-term memory loss. Remember Ghajini movie?

Which means he can just forgets all the events that had happened before joining PTI. He can forgets all his statements, activities and actions in support of Pakistan Peoples Party led government as a foreign minister as well as all his talk shows where he defended Party’s position and program against Imran Khan’s pro Taliban & anti US policy.

Now Shah Mahmood Qureshi holds that Pakistan’s nuclear weapons are not safe under the present PPP dispensation, but when he was foreign minister, he swore that Pak’s nukes were “very safe” under president Zardari. His statement also conveyed the impression & message that the Pakistan’s nuclear assets are not safe, that is exactly what the foreign media has been saying. Read; Jeffrey Goldberg and Marc Ambinder’s report: The Ally From Hell. SMQ had simply committed treason and sedition by claiming that.

Sindh information minister Sindh Shazia Mari rightly said that president Asif Ali Zardari is a symbol of the federation and that the prime minister of the country is the sole controlling and command authority of the nuclear assets of the country. We second her claim that the people of Sindh will not support such exploiters of Bhuttoism and will not welcome selfish people to their land & Sindh is a political stronghold of the Pakistan Peoples Party (PPP) and that any conspirators against the party would perish and no such people will ever succeed in their motives.

Punjab Governor Sardar Latif Khan Khosa, while talking to media said that it was strange that Shah Mahmood Qureshi, who was removed from the office for his poor performance as foreign minister, was now finding faults with leaders of his former party. He said that at a time when he was serving as foreign minister of the country, he had no problem with his leaders and everything was fine but when the post was taken from him for not delivering, he developed a different feeling.

According to the statement issued from media office of the PPP, party’s central nformation Secretary Qamar Zaman Kaira said that had Qureshi was given the portfolio of foreign minister, he would have been with PPP right now, praising President Asif Ali Zardari.

In a satirical way Kaira said when he (Qureshi) was foreign minister the nuclear assets of the country were safe under the Presidency of Zardari and now when he was not part of the government, these were insecure. He said that PPP was having full confidence in the leadership of President Zardari. He made it loud and clear that all the decisions taken by the PPP-led government were taken in the larger interest of the people and the country.

Thus, the decision to include in Imran Khan’s ‘Clean politicians’ list Shah Mahmood Qureshi, seemed like an opportunistic move at the critical time of Pakistan’s history and we are quite sure that historians will always come to the conclusion that he was a dishonest politician & traitor. His political future will not be different from other turncoats & opportunists Like Lughari, Jatoi and Khar who left the party for the sake of their personals petty interests.

Shah Mahmood Qureshi! you can’t run away from your past. You need to face up to reality when you said Pakistan’s nuclear arsenal’s are safe under under President Asif Ali Zardari’s leadership.