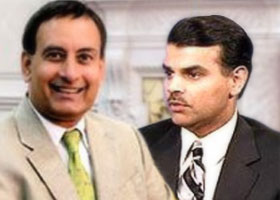 Ours must be the most insecure country in the world, and the most paranoid. We are terrified not just by our nightmares but our very shadows. And judging by our behaviour we seem to think that the rest of the world has nothing else on its mind but how to undermine the Islamic Republic’s impregnable foundations.

Husain Haqqani and Mansoor Ijaz deserve each other. They are of a kind. The BlackBerry evidence leaves little doubt that in the preparation of the memo, which has all of establishment Pakistan in a spin, both were in it together.

But suppose it was not just one memo delivered to Admiral Mike Mullen but a full dozen, would this paper trail have led to the castration of the Pakistani military at American hands? Would the army have been brought under the Pentagon’s control and our vaunted nuclear assets under American discipline? Some assets these, whose possession instead of making us a more confident nation seems to have made us more insecure.

In God’s name what are we talking about? The American lobbying and think-tank scene is full of characters like Mansoor Ijaz. Remember the Iraqi conman Ahmed Chalabi who sold himself to Donald Rumsfeld and his crew as a future leader of Iraq? Washington DC crawls with such self-promoters. All right, he had what is being called an “explosive” memo delivered to Mike Mullen. Did the latter order the Sixth or Seventh Fleet into Pakistani waters? Did American drones start circling over the sites where our treasured nuclear assets are kept?

Mullen’s office did the only sensible thing: ignore the memo. Or do we have anything to suggest that it was taken seriously? Yet here the world’s only Islamic nuclear power, as we never tire of reminding ourselves, has been shaken to its roots by this piece of paper. Mansoor Ijaz must be flattered.

Of course President Zardari’s man in Washington – always more the president’s man than Pakistan’s – had no business being involved in the cooking up of the memo. But we have his ambassadorial scalp, don’t we? He’s always been a cool man, I think a bit too cool, but in a TV programme I was on with him he got a bit emotional and I had to tell him to calm down. What more do we want?

Or is it that his scalp is not enough and there are people whose dearest wish is to see the memo trail go right up to the Presidency? Now that would be some trophy, wouldn’t it? Establishment Pakistan has never hated anyone as fiercely as Zardari, the central charge against him being corruption and cronyism unlimited. All this may be true but, it bears remembering, he is, like it or not, the elected president of the republic.

And, come to think of it, the establishment’s likes and dislikes have never been defined solely by corruption. Zulfikar Ali Bhutto was not corrupt but the establishment hated him. Akbar Bugti was a nationalist but Musharraf hated him. The military has had its share of corrupt generals, admirals and air marshals. How many of them have had to pay for their misdeeds?

Why must General Headquarters arrogate to itself the right to be the definer of the national interest and the ultimate arbiter of patriotism? Just a year is left for this dispensation’s time to be over. Never once in our tumultuous history have we had a peaceful transition from one democratic government to another. Why don’t we let it happen this time?

If some people want to believe it, so be it. Zardari may be the devil incarnate, the personification of all that is dark and evil. But there is a democratic process at hand to get rid of him. Why, for once in our history, don’t we develop the patience, just for one year, to sit out this process? Why don’t all the national redeemers, chafing at the bit to save the nation, bide their time to test their luck in the coming elections?

Pakistan may not survive until then, say the prophets of doom. Do they have so little faith in their country’s resilience and tenacity? Ayub and Yahya could not finish us (although between them they ended up truncating us). We survived Zia (although the Taliban are proof his legacy lives on). We survived Musharraf, eight and a half years of him. What mood of defeatism makes establishment Pakistan so convinced that Pakistan can’t survive a year more of Zardari?

Corruption scams in India are far bigger than our fattest cats can dream of – simply because the Indian economic cake is far bigger. But does anyone there talk of the army stepping in? Anything remotely resembling the power games played regularly by GHQ and ISI is simply inconceivable in India. The man at the centre of the 2G broadband scam, A Raja, is in Tihar jail. That’s how it should be here. The courts are working. My Lord the Chief Justice continues to deliver his obiter dicta from the bench. The rental power scam has been taken to the Supreme Court. Isn’t this the proper way to go about accountability?

True, the government may impede the judicial process. But then the process has to prove itself bigger than the roadblocks.

At the same time, to carry greater credibility the accountability process must be across-the-board and even-handed. Why is the suspicion allowed to linger that whereas alacrity is shown in some cases, lethargy is the norm in other cases? Why are their lordships of the apex court reluctant to take up Air Marshal (rtd) Asghar Khan’s petition regarding the ISI funding of politicians in the 1990 elections? Should the law be more equal for some than for others?

The self-appointed keepers of the national flame, guardians of our ideological frontiers, are playing a strange game. On lesser pretexts they have ridden into the political arena and sent governments home. But the times not propitious for such adventurism, the guardians are doing the next best thing: pulling the strings from behind and whispering and muttering things which keep the embers of discontent alive. Is this serving anyone’s idea of the national interest?

Memogate is not worse than the ‘99 coup, not worse than Kargil, certainly not worse than the ‘65 war (from where Pakistan’s ruin began) or the dismemberment of Pakistan in 1971. Does the army have so little confidence in itself that it thinks a Mansoor Ijaz memo, albeit with live input from Husain Haqqani, can unravel the structures of national security?

We have turned ourselves into too uptight a nation. We need to relax a bit. The world is not conspiring against us. We are self-sufficient in conspiracies. Anyone looking at our jihadi lashkars could be forgiven for thinking we don’t need external enemies. We have enough of them at home. No one needs to undermine us. We do a good job of it ourselves.

And let’s not forget what Haqqani has always been about: a hot ISI favourite in Zia’s time, a hatchet man for the Sharifs in the halcyon days of the Islami Jamhoori Ittehad (no one piled as much dirt on the PPP as him), press secretary to Mustafa Jatoi, press secretary to Balkh Sher Mazari, a Benazir Bhutto confidant and then close to Zardari. When neo-conservatism was the ideological fashion in Washington, he was close to neo-cons. A chameleon could take lessons from him. Always too clever by half, but then he got away with it.

That is, until now when he got caught by someone as smart as himself, or perhaps a shade smarter. I suppose it takes a thief to catch a thief.

But to the country’s leading ideological warrior, Lt Gen Ahmed Shuja, I would still say, let it go. Keep the ferment down and let this apology of a democratic process proceed on its fitful and rickety way. Derailing it is no option. A set of technocratic clowns will only make things worse. Yes, our economic plight is bad but, please bear in mind, not as bad as – to give but one example – Argentina’s, when it defaulted on its foreign debt, and came out a winner when it rode out the ensuing storm.

Having seen and endured so much, what’s a year between friends?