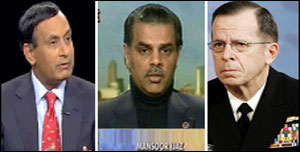 This is a serious development which suggests that noose tightens even further around Husain Haqqani. ISI-stooges (Iftikhar Chaudhry loving, Imran Khan worshipping lawyers) have approached the Lahore High Court to place Ambassador Haqqani’s name in the ECL.  While right-wing lawyers are doing this, their urban liberal counter-parts in Pakistani media are currently busy in providing ill-motivated appreciations and advices to Ambassador Husain Haqqani.

Pakistan’s urban elites (aka fake liberals) want to make another Salmaan Taseer out of Husain Haqqani, only to blame President Zardari and PPP in case something untoward happens to Mr. Haqqani.

Urban elites’ fake support for Husain Haqqani is aimed at creating a major rift between the civilian government and Pakistan army. If known anti-PPP journalists such as Abdul Qadir Hasan, Tammy Haq, Cyril Almeida, Nasim Zehra (and their trainees) are appreciating Husain Haqqani, it makes it very obvious that they want to cause damage to both Haqqani and the fragile democratic government.

Individuals come and go. No single individual is equal to democracy. Will the PTI loving, Iftikhar Chaudhry worshipping urban elites stop projecting Haqqani as indispensable to democracy? It is hilarious to see Abdul Qadir Hasan of JI/ISI vouching for HusainHaqqani’s patriotism.

Unfortunately some progressive writers too, such as Dr. Taqi, Ayesha Siddiqa, have been (once again) entrapped by the establishment as they were entrapped during the so called lawyers movement.

This may be recalled that urban liberals and right-wingers were well-coordinated in blaming and cursing President Zardari after Taseer’s murder. A similar unity between urban fake liberals and right wingers was evident during the ISI-backed Lawyers Movement.

If the establishment is able to place Husain Haqqani’s name in the ECL, it will be a great victory for the Teen Jeem (Journalists (both from right wing and fake liberal class), Judges, Generals), and a matter of further embarrassment and damage to Ambassador Husain Haqqani and the elected government.

We suggest that Ambassador Haqqani should avoid unnecessary verbal battles with Mansoor Ijaz, refrain from engaging with right-wing and fake liberal stooges of the establishment, and foil the right wing-urban elites’ coordinated plan to derail democracy in Pakistan.

LHC moved for placement of Haqqani name in ECL

LAHORE – Lahore High Court (LHC) has been moved in connection with the placement of the name of Ambassador to US Hussain Haqqani in the exit control list (ECL). Barrister Javed Ahmed has filed the petition taking plea if ban is not been imposed on Ambassador Haqqani for moving outside Pakistan then he would also flee like Raymond Davis who was involved in killing of two Pakistanis in Lahore. The petitioner prayed the court to issue orders for putting Ambassador Haqqani’s name in ECL, and he (Haqqani) be also directed to file details of his accounts and assets along with affidavit in the court.