Editor’s note: According to news reports, Pakistan army is quite interested in investigating about a memo delivered to Admiral Mullen in May 2011 which was allegedly authored by Ambassador Husain Haqqani on the advice of Pakistan’s elected government. An agency plant has approached the Supreme Court requesting it to constitute a judicial commission to investigate the authenticity of the ‘secret memo’. We consider such steps and allegations as baseless and ill-motivated and remind army generals and their accomplices in judiciary to refrain from any misadventures against the democratic government. As noted by Cyril Almeida, “The trap may be more elaborate this time, but to anyone who has seen this cloak-and-dagger stuff over the years, the first suspect, the first port of call, is always the same.” We welcome Ambassador Haqqani’s offer to present all details to Prime Minister Gilani, however, in all fairness before any investigation on the current memogate (most probably a trap carefully laid out by Pakistan’s ISI via Mansoor Ijaz) is initiated, why don’t Pakistan army and judiciary start investigating about another memo which was written in 1955 by General Ayub Khan, Commander-in-Chief of Pakistan army to US Amdiral Arther Radford, in which top secret details of Pakistan army were revealed. More details in Kamran Shafi’s column below. (End note).

Amid all this talk of how our sovereignty has been compromised byMemogate, another Memo, this priceless one signed by none other than the Founder of the Pakistan Army who first taught the Generals a lesson they never forgot: how to mount coups d’etat and take over the government from the useless ‘bloody civilians’ came to mind. Here it is:

Considering that you have been such a good friend, I thought you would be interested to know how the affairs of military aid stand looked at from our angle… which to say the least is gloomy.

2. In early 1954, we were informed that Meyer’s Mission was coming out to Pakistan to negotiate details of military aid with us. In order to prepare our appreciation and plan for presentation to this Mission, we made several approaches to Pentagon (sic) to give us an indication of the scope of the aid. On failing to get any reply we prepared our case on the following basis.

In the event of major aggression against Pakistan, determine the forces required to:

(b) Launch a counter-offensive from it.

The result of appreciation on the above basis gave us an estimate of the additional effort to be put in by USA (sic) after deducting our maximum effort on one or both scores, depending on how far America was prepared to go. It was not till the end of our briefing we were told that… the Mission had come out to find out our deficiencies in nuts and bolts and no more.

3. Then came our meeting in Washington in October ‘54. On it (sic) we were told that America would be prepared to complete one ½ Division of our Armour and four Divisions of Infantry, and as we were spending the maximum we could on Armed Forces (sic), apart from weapons etc required our additional internal expense [salaries, staff cars?] would also be covered for these Formations. The programme was to take three years to complete. Thereafter our dealings began with the USMAAG.

4 .Now that the target was set, I thought the things (sic) will move smoothly so long as a sound working arrangement was evolved between the American Staff and our Staff. So, I issued a directive to my staff that they will work (sic) in close collaboration with the Americans, who were also asked to work more or less on a joint staff basis with our fellows. Unfortunately I failed to obtain American cooperation on this with the result that when our staff presented our requirements list it was objected to on the ground that our Divisional strength was in excess of theirs, which could not be supported. In any case no more than 40,000 additional men could be catered for. Our figure was 56,000 men. When asked for the working (sic) of the figure of 40,000 men, no satisfactory answer could be given.

5. Thereupon the whole thing was put in the melting pot and our staff went to work again. We reduced our establishments to remain within 40,000 men additional permissible limit with the following effect:-

6. Our requirements based on above (sic) were then worked out and submitted to USMAAG and presumably accepted by the Department of the Army, who allotted certain amount of funds for internal use for the fiscal year 1954-55. Incidentally the allotment for a certain set of accommodation (!) estimated to cost 16.64 crores (sic) rupees was 7.40 crores and so on. Meanwhile, the whole of Pakistan Army (sic) in general and especially the five ½ Divisions earmarked for completion are being churned up and re-organised to conform as far as practicable to American establishments.

7. Then came the bomb-shell in the form of the message from the Head of the USMAAG … shorn of its verbiage it reads that as far as the Army is concerned the ceiling of military aid is 75.5 million dollars and that all talk of balancing five ½ Division (sic) is revoked.

8. Forgive me for being frank, but I would be failing in my duty if I did not tell you that our people are completely frustrated. They think they have been given an enormous amount of work unnecessarily and that they have been let down. They are in a mood not to accept an American word however solemnly given. This is sad in that it does not augur well for our future good relationship which was one of the things I had been hoping to develop.

9. What the political repercussions be (sic) when this news gets known, and after all you cannot conceal facts indefinitely in a Democracy (this is really rich coming from the grand-daddy of coups d’état in the Land of the Pure!), I do not know. But one thing I do know that (sic) this government will come under tremendous pressure and fire from within and without.

Hope you are in very good health.

Now then, for those of my readers who are ‘bloody civilians’, Ayub Khan disclosed, in his memo, the Table of Organisation and Equipment (TO&E) of the Pakistan Army to the American. The TO&E is always Top Secret for it gives out the actual make-up of the sub-units/units/and formations of the army, information that can be of the greatest help to the enemy. Also, kindly note the whimpering tone of the Memo.

So there you have it. So let us not just dump on ‘bloody civilians’, that is, if they had anything to do with any of it in the first place.

Just a gentle reminder to the keepers of our ideology… 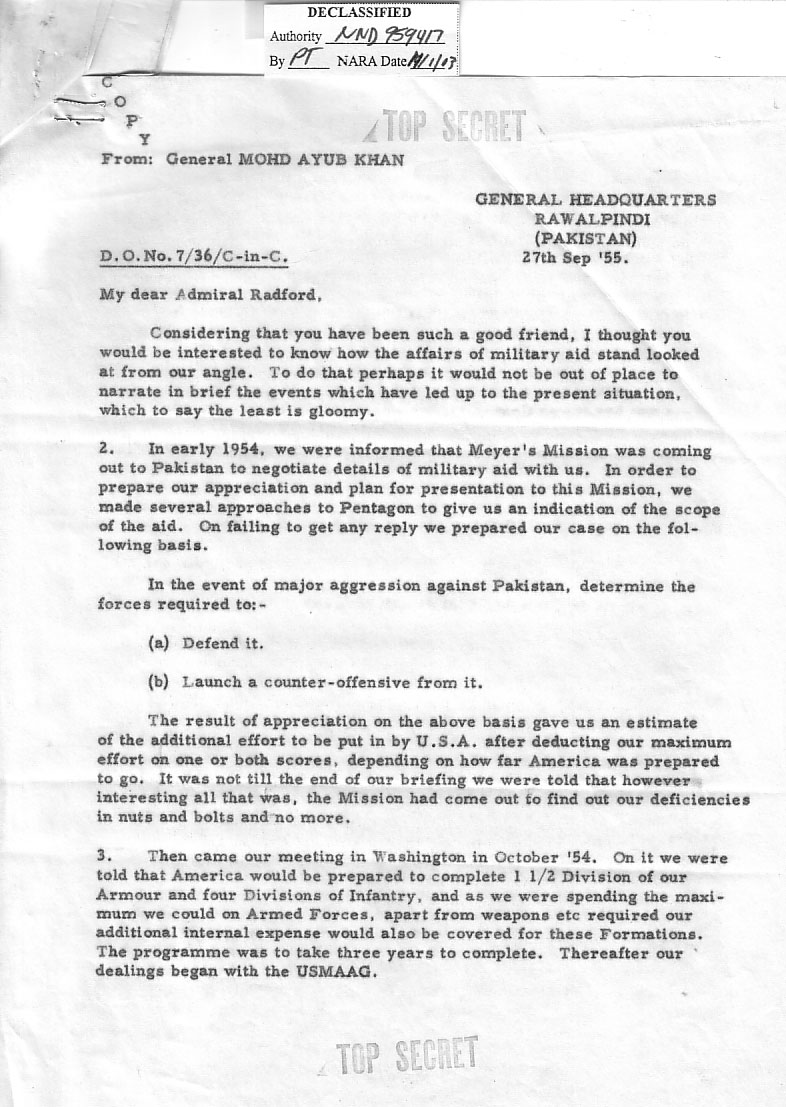 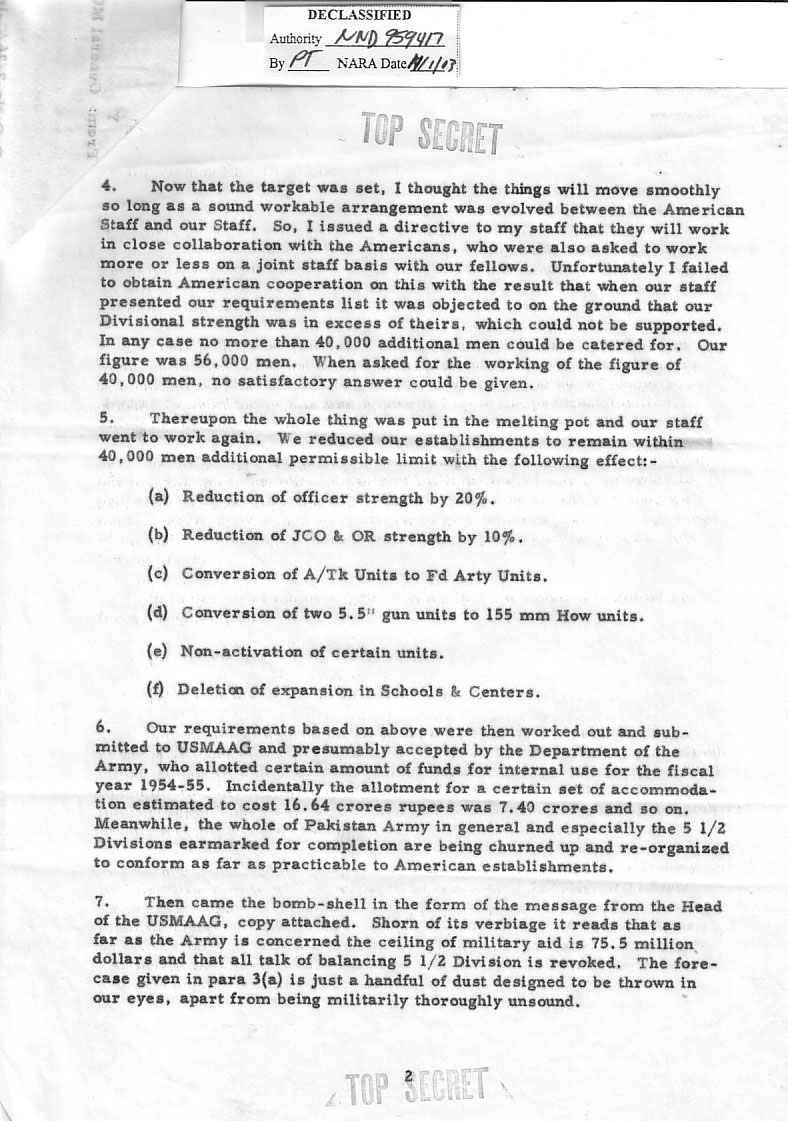 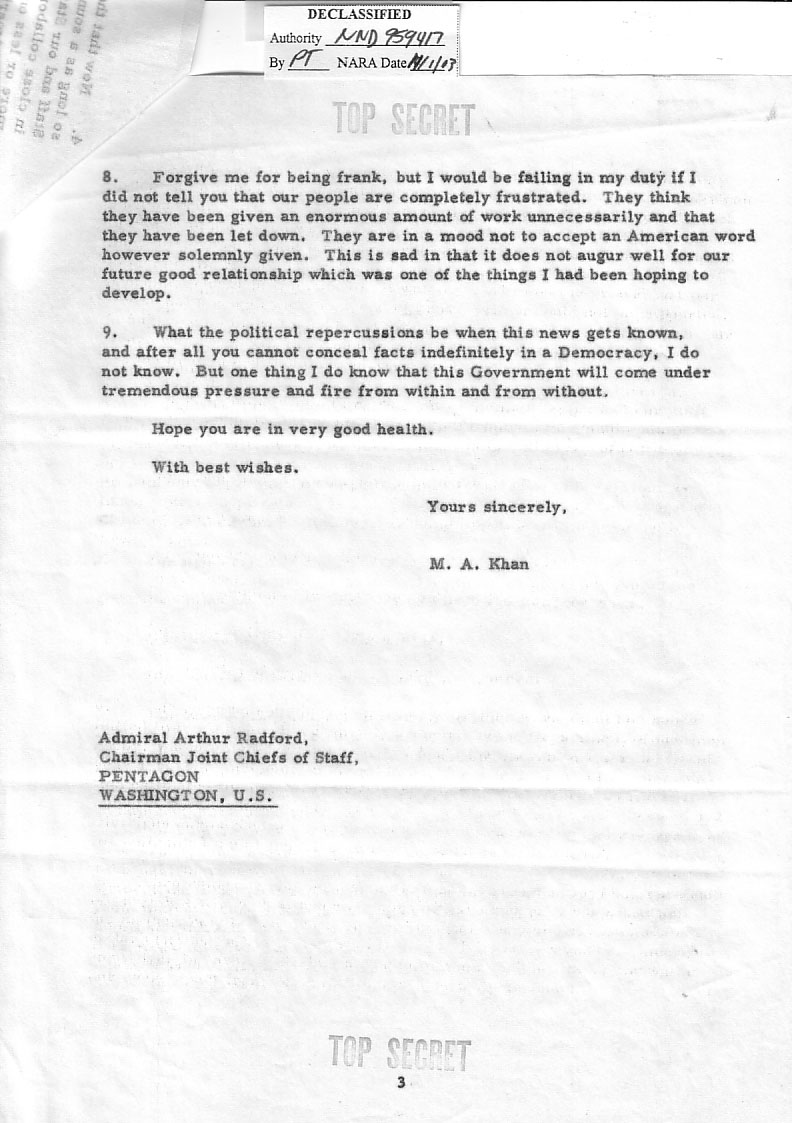