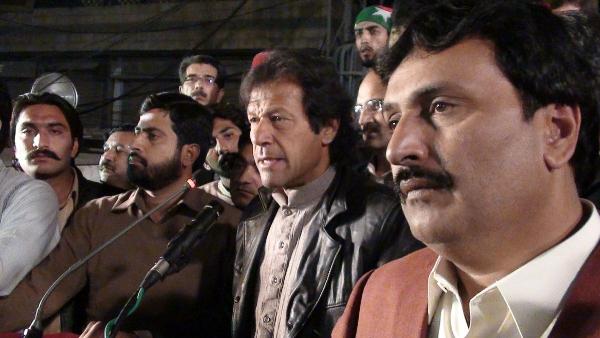 Imran Khan will sweep next elections – by Abdul Nishapuri

Here is an overview of unofficial results of NA-55 by-elections announced by the returning officer:

Obviously there was a close competition between JI and PTI.

We take this opportunity to congratulate “Sir” Imran Khan and his supporters on securing more than 3100 (three thousand one hundred) votes in Rawalpindi. However, they must persist in their demand for mid-term elections because miracles do happen.

Perhaps they may also take this opportunity to reflect if politics is done only in TV talkshows, or on internet by writing blogs or making facebook fan pages or calling everyone (other than Imran Khan) corrupt 24/7. They may also pause to reflect why Jazi Khan in 2008 secured more than 12000 votes as an independent candidate without Imran Khan’s support, and why Imran Khan’s support in 2010 has reduced Jazi Khan’s vote count by at least 75%. They may also reflect about the fact that people of Rawalpindi, not unlike people in other areas of Pakistan, have rejected Imran Khan because of his persistent and unashamed support for Taliban and Al Qaeda.

In the meanwhile, here is a sneak peek into an on-line forum of Pakistan Tehreek-e-Insaf without any additional comments:

23/02/2010 11:04 PM
Polling gets underway,it is a really charged atmosphere and turn out is good so far.
The weather has cleared up very nicely and it is now very fine conditions and voters are coming out in good numbers.
Ijaz khan jazi visits different polling stations and gives interview to geo news at murre road polling station.
Jazi casts his vote at college road polling station and talks to media.shown live on dunya news.

24/02/2010 12:11 AM
I can confirm atleast 5 votes from Khyban i sir syed and satellite town for jazi khan from whom i know and convinced to vote.they are Haji Amin Khan who used to be my school van driver and his sons other family members and people who he knows,he is an aged person about 60 years old and wanted to vote for PTI in last general election but due to boycott by PTI he voted for PML N.

I can confirm atleast another 5 votes from dhok matkial and dhok hasu area by a couple of young people arond 25 to 30 years old and people they know whom i met in public transport van 24 while coming back from my college in past few days and they commited to vote for PTI and were already very enthusiastic about it.

I can confirm atleast 5 votes from satellite town for PTI by elder brother of my friend in college Hammad and his family members and friends.

I cannot confirm another voter Shaukat Abbasi Chemistry teacher in my College (lahore grammar school) from whom i had taken commitment to vote for PTI instead of Sheikh but i hope that Sadaqat Abbasi Rawalpindi Division President of PTI of whom he is collegue as sadaqat abbasi also teaches Economics in Lahore Grammar School from where I am doing my A Levels would ensure his vote.

11:40AM
Turn out at its BEST in Hazara Colony. Mazharabad. And We (PTI) are leading.

At present PTI is doing good in Bangash Colony and Khayabaan.

Dhoke matkial: PTI strong on women’s side and also gud show so far at mens side.
N league strong at dhoke matkial.

24/02/2010 4:11 AM
voters have come out in greater nos after 1 and atmosphere is now more charged and activity is at its best,PTI is also very active,Jazi khan is visiting polling stations frequently and is very hopefull.
i agree with the fact that PTI is strong in Khyban and Dhok Matkial,i dont know about bangash colony.I am sure that PTI will win from College road and naya mahala.
it is a very crucial and most important period between now and 5 and it will be the deciding period lets pray for the best.We are in a good position to put up a strong performance.

24/02/2010 4:33 AM
one advise to people on ground in NA 55, if someone can convey to them..after polling is over even then there should be some people present in polling station to help polling agent..because real rigging starts in counting , do not allow any N leaguia or Sheikhoo people to change results during counting

Humein Pehra Dena Ho ga wahan Par and in case you feel any misconduct from League people immeditely inform media and inform all news channels etc. because anything is expected from crooks like Shakeel Awan and Sheeda Talli so you have to take care of all things..only casting vote is not enough , you have to protect it also

24/02/2010 5:19 AM
there are reports of riging and riots between workers of PML N and AML at Islamia high school no 4 near liaqat bagh area.polling station no 239.there were reports of riging here in the morning as well by Jamaat Islami.
there is also a prblem coming up that people who come to vote are not registered even some who have voted during last elections.

i have talked with a relative who lives in islamabad but he is well aware of the election situation in NA 55 and he also told me that PTI can be at third place and today competition was between N and Sheikh ..let us pray for atleast good number of votes but till now situation is not looking good

24/02/2010 7:08 AM
Jazi got more votes as independant candidate last time. This is embarassing
Leader

Their is something wrong in their.
Sialkot Da Raja

24/02/2010 7:27 AM
admins this is stupidness why are u ppl not publishing my posts so sad .sach yehi hy boyz. Publish na karnay say kuch nai honay wala
Khan Boy

24/02/2010 7:28 AM
Guys whatever the results are..m leader is Imran Khan….we hav to realise our mistakes and try to improve every step..the resul was obvious here that PML N gnna win and SR will succeed…but JAZI khan 12,000 votes as iND and now……?i cant believe this …
Its Farhan

i think the biggest problem is lack of the ability in our public to understand who is right and who is wrong,

& such nation got destroyed and Allah replace such nation with a better nation, & see wt is happening…

Its just not sad for PTI but im very sad for our Pakistani public. No sensible man or woman can vote such corrupt parties like PML-N and this guy Sheikh Rashid who has no real idealogy.
I am shocked uptil now to see the ignorance of our public infact Indien public has better understanding than ours, i never thought that such day will come in my life when i have to admit this reality that we as Pakistani are failed to educate our general public to understand the basic difference of right & wrong as compared to indien public .

PTI is the Only right party to vote in Pakistan, i am 101% sure and just because our majority of public is ignorent & fool, that is not going to change my mind ever.

See it like this if today, govt. decide that just those who are F.A pass or atleast matric pass are allowed to vote, All of us will see who is the winner.

The struggle to change a ignorent nation is not easy, There was a time when Prophet Muhammed (PBUH) was stoned by people & he even had to leave his city, but that did not change the fact that he(pbuh) and his followers were not on right path.

24/02/2010 7:47 AM
It’s just unbelievable. Seems like a big conspiracy against PTI. We should better be close to the top 2 candidates. I hope someone from NA-55 can explain this

24/02/2010 7:53 AM
i thing that there is a lot of rigging because i saw thousands of people in jalsas.its not a matter of win or lose it is a matter of getting more votes.it is shameful for us if jazi got less than 12000 votes because he got them if he is independent.i think that we people deserve this loadshedding corruption because we are uneducated people we do not elect right people.my ambition was to become a politician before 4 hours but now i changed my ambition after seeing the result that there is no place for common and honest people in pakistan politics. Any HOW IMRAN KHAN ZINDABAD PTI ZINDABAD

24/02/2010 7:54 AM
People don’t want change and deserve zardaris and musharrafs. These people should be taught some lessons by zadaris taking all the money away from Pakistan.

24/02/2010 7:57 AM
No doubt our bOyz worked hard But some 1 what about 12000 votes of jazi in last election . where are they I am not asking for anything else but atleast PTI isko ko bhi maintain nai karsaki my estimate is less than 10 k for Jazi and thats pathetic.
NO NEED TO POST ELECTION UPDATES WHEN OUR CADIDATE IS NOT EVEN IN THE JUNGLE.

24/02/2010 7:58 AM
ITS A CONSPIRACY AGAINST PTI.ALLAH IS WATCHING AND INSHALLAH THE DAY WILL COME WHEN PTI WINS AND THEY LOST.

24/02/2010 8:18 AM
Guys I am 100% sure there is soemthing fishy going on. How come there were 8000 people in last jalsa and I am sure their familes would have voted for PTI too so atleast 16000 votes should be there. But it seems people who were on our polling camps even they didn’t vote for us. It doesn’t seem possible. I can’t believe it.
Leader

24/02/2010 8:27 AM
BROZ plz tell me what does this mean zamanat zabt acoording to electioz as mentioned above.

24/02/2010 8:35 AM
@khanboy if the candidate fails to get at least X votes, the money deposited for election to election commission is not refunded and it is considered very embarassing.
I don’t know who many votes are required.
Leader

24/02/2010 8:39 AM
Election is not a solution to our problems. This election is an eye opner. In next general election either PML (N) or PPP or Sheihk Rasid will win, so what difference it makes. We need a BLOODY REVOLUTION. Atlease Talibans are doing a good job by killing these corrupt politicians.
mb1

Guys we also need to prepare ourselvs for the criticism now we are going to face from the big mouth people like Aabdi of PPP, who clam that awam has rejected the ” Pro Taliban ” forces like PTI & JI.

But Guys we need to remember that EC is under the punjab govt. and no matter wt results are unrealistic. there is something wrong….. im 101% sure.

Because this is not just a seat, this has damaged the name of PTI in Pakistan and how nicely PML-N has played, they won and destroyed the image of PTI in Pk, i heard Jazi Khan he said that from an area where he is sure that his family has more than 200 votes the result was 3 votes for PTI.

Just for a secod, without thinking that i am just shouting after loosing, how can an area with 65% literacy rate and we saw in Jalsas and in other media interviews that PTI has a vote bank there, the current nr of votes dont look relistic…

there is something wrong and actually very wrong….
Faakhir 27

I refuse to accept this result. There is someting is seriouly wrong in the whole electioneering process. How are the votes being counted? The numbers just do not add up. When India can have electonic voting machines why can’t we? This manual voting system belongs in the last century. Did people mistakenly give vote to “sher” thinking it was IK? As IK is often compared to a lion. We can expect this from some of these retards.
Andil

Nahhh … i am waiting for IK’s statement. This isnt ending here.
Abytude

24/02/2010 1:04 PM
It’s really heart breaking after so much hardwork and preperation, we still couldn’t get good number of votes. I’m shocked and really worried about future of Pakistan now. I don’t know what to say…. completely speechless. Can’t even face my cousins now who are pakay muslim leagee.
Kabir Chaudhry