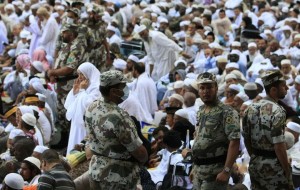 Editor’s note: We are cross-posting a thought-provoking article by Dr. Abbas Zaidi on a much ignored topic, i.e., persecution of Shia Muslim pilgrims during the recently concluded Hajj. The Saudi-Salafi Empire has already shown its sectarian bigotry with their opposition to the elected PPP government and President Zardari of Pakistan as revealed by WikiLeaks. Sectarian bigotry was the main motive for the Saudi-Ikhwan lobby to unsuccessfully pressurize the USA to bomb Iran which too was exposed by WikiLeaks. Saudi-Ikhwan lobby’s double standards were also revealed by their seemingly pro-people stance in Arab League on Syria but active oppression of pro-democracy demonstrators in Bahrain. The Saudi-Salafi-Ikhwan lobby has always supported the ISI and opposed the elected government and President of Pakistan. Within Pakistan, Saudi-Salafi-Ikhwan lobby has consistently supported (financially, ideologically, logistically) extremist militias (TTP, LeJ, LeT, SSP, JeM etc) who have committed mass massacres of Pakistan’s majority Sunni (Barelvi and Deobandi) Muslims as well as Shia Muslims, Ahmadi Muslims, Christians, Hindus etc. (End note)

According to AFP and SPA news agencies, Saudi Crown Prince Nayef bin Abdel Aziz has hailed the ‘success’ of this year’s hajj “despite the risk of chaos feared in the wake of the Arab Spring”. He especially referred to “some pilgrims” (read Iranian/Shia), who he said had planned to “exploit the international and regional changes taking place to cause chaos”.

When Nayef was elevated to crown prince a few weeks back, his short biographies in the media around the world described him as having a “hardline” stance (read hatred) towards the Shias. In the past, he has repressed the Shias of his own kingdom, who make up 30 percent of the population, for demanding their natural political rights.

Going back to the hajj, the statement of Nayef is not true. The hajj this year was not as smooth as the crown prince of the House of Saud wants the world to believe. Here are some facts that prove the ruthlessness and highhandedness of the Saudis in dealing with peaceful pilgrims who happen to have a different religious affiliation than the literalist one subscribed to by the Saudi royals:

One week before hajj, a group of 10 Canadian pilgrims led by Shaykh Usama Al-Atar went to Jannatul Baqi where they recited Ziyarat (supplication) for Hazrat Bibi Fatimah (AS) and members of the family of the Prophet Mohammad (PBUH). Shaykh Usama Al-Atar is a noted Canadian religious scholar and has given talks on Islam in a number of countries, including the US and the UK. At present, he is a postdoctoral fellow at the University of Alberta. He is well known for his published research on diabetes and cancer research.

The Saudi policemen stationed near Jannatul Baqi began to shout at them and asked them to leave. The pilgrims left the graveyard and continued to recite Ziyarat. But the policemen kept on harassing them. The pilgrims left the area and went to the Prophet’s (PBUH) Mosque complex, where Shaykh Usama Al-Atar was brutally beaten up by the policemen who had followed them from Jannatul Baqi. Mohammed Hayward who witnessed the assault on the Shaykh said, “They manhandled him badly, he had blood on him. They forced him to sit under an air conditioning unit, and squashed him until he was blue in the face.” He also said, “The situation here generally has been very tense. There has been a sense that Saudi [security personnel] are out to target people. I have been hearing abuse from them levelled at different groups. It is very provocative.” (Further information can be read on the website of the Islamic Human Rights Commission: http://ihrc.org.uk)

After the beating of the Shaykh, many outraged British pilgrims wanted to protest, but they were warned by the British Embassy of bloody consequences, so they did not protest. The British diplomats were probably aware of the bloodshed that the Saudi police carried out on mainly Iranian pilgrims in 1987 on the orders of King Fahd.

One needs to ask: what is the purpose of performing the hajj? The great sufi Mansur Hussain al-Hallaj gave the best possible answer to this question when he installed a stone cube in the backyard of his house and began to circumambulate it. To his puzzled interlocutors, he said, “If the hajj means no more than making circles around stone, I can do it in my own backyard.”

But this is precisely what the Saudi royals with their Salafi ideology want the pilgrims to do, ignoring that hajj is one of the few occasions, perhaps the only one, when Muslims from all over the world can come together and discuss their problems. Thus in principle, hajj is a great opportunity for freedom of expression and a great opportunity to breathe freedom in the holiest Muslim place in the world. But then freedom is anathema to the House of Saud. You cannot pray at a graveyard even if the members of the Prophet’s (PBUH) family are buried there. You cannot stand and praise the Prophet (PBUH) in front of his grave, and certainly you cannot squeak a phrase like “Down with America!” Traditions dating back to hundreds of years have been banned by the Saudi royals. A noted Muslim sufi scholar Stephen Schwartz has observed that the Salafi ideology has undermined the very concept of hajj. He says: “Before the Wahabi takeover, Hajj travellers from Egypt came to Makkah accompanied by music, which the Wahabis banned. In addition, distinctive customs observed by Shiite pilgrims were prohibited under the Saudis.” He further says: “Hajj has been marred by Saudi inconsistencies in fixing its dates, as well as recent Wahabi attempts to segregate women from men in the processions walking around the Kaabah and to impose the niqab or face veil on female pilgrims — a practice unknown in 14 centuries of Islamic history.”

Sad to say, the number of Salafis and their acolytes is just one percent of the Muslim population in the world. But few Muslim individuals or countries have the courage to confront the Saudi royals on why they have turned the House of Allah into their personal fiefdom. They have demolished the greatest milestones of Islamic inheritance such as the Mosque of Fatima Zahra, Jannatul Baqi in Medina, graves of Banu Hashim in Makkah, and the grave of the father of the Prophet (PBUH). The list of Saudi vandalism is very long. In 1975 the tomb of Eve in Jeddah was sealed with concrete, and in August 2002 the tomb of Sayyid Imam al-Uraidhi ibn Ja’far al-Sadiq was destroyed by dynamite. Saudi royals make billions of dollars annually from Makkah and Medina, but there is no accounting for it. It appears there is a conspiracy of silence when it comes to the misdeeds of the House of Saud.

The writer is the author of Two and a Half Words and Other Stories. He can be reached at hellozaidi@gmail.com