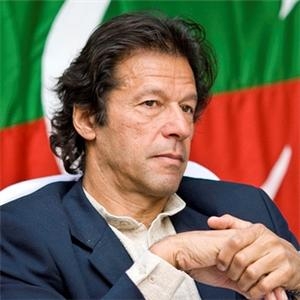 Imran Khan has emerged as the Messiah for a nation long clamoring for the arrival of a noble soul, who would, with sincerity and clarity of vision, uplift millions from the abyss of poverty, despair and disrepair and propel Pakistan into the ranks of ‘developed’ nations. And his arrival on the political scene- termed as a “Tsunami” by the man himself- that has taken 15 years in the making, is indeed a welcome and timely development. And yet, those 15 years boiled down to a single moment, that protracted struggle could be captured in that one powerful image that floated around in social media websites, where a prominent Imran Khan, empowered by the thousands that had gathered around Minar-e-Pakistan, his hands raised in a show of defiance against the status-quo, announced his arrival in the arena of Pakistani politics, his fiery speech assailing the corruption an lethargy of rival political parties. Previously, he had been dismissed as indecisive, vacillating, even somewhat confused and thus a small fish floating anxiously in a big pond. All of it changed on October 30. Yes, the “youth quake” changed the landscape of Pakistani politics. But, one may ask, will this outburst of political energy translate into tangible change for the masses? And this, above all else, is the most vital question.

Given the harrowing conditions the nation is going through- load-shedding, the incessant violence, the creeping inflation- anyone of reasonable pedigree can charm the masses and capture the public imagination. For now, Imran khan can berate and castigate the policies of the current regime, stockpiling the entire burden on their heads-not that they are not culpable- and gain mass support of the embattled masses. Pakistan- and I feel bad saying this- is a mess, a real bad one, with the economy barely afloat, sectarian tensions boiling up and the United States breathing down our necks  in  Afghanistan. To get out of this hole, we need to first recognize that we are entrapped in one. Despite the theme of change Imran Khan so readily endorses, we should, as informed citizens, recognize the
rhetoric in his speeches. I don’t blame him for resorting to tall claims for in order to captivate the masses; one does have to show them big dreams, convince them that change is just around the corner. But then again, change won’t be easy, and it surely won’t be abrupt, if anything, it’s going to a long path towards recycling Pakistan. And Imran Khan needs to tell this to the people who deserve to know the truth, however painful and excruciating it might be.
Imran Khan stands for hope as our gullible youth are led to believe. Imran Khan stands for hope because we have no other alternative, as the Zardari’s and the Sharif’s have been tried and tested, one too many a time. When asked by my friend who I would rather vote for, I feel silent. I just could not think of one person, one political party who had my confidence, who had my vote. Such was the nature of my quandary. And then after a reflective 2-3 minutes, I blurted out” Imran Khan”. And then it struck me, as much I am sure it struck my friend, that I had no other viable option. So Imran it was. In the end, politics is about, as it ought to be, about the welfare of the masses. We, as denizens of the land of the pure, are asking for real tangible change. While the rhetoric employed in political speeches can be terribly exciting, all of it comes to naught if the common man remains trapped in the tentacles of poverty. Promises have been made and broken in the past. Imran Khan needs to provide his party manifesto that details exactly the policies his party wishes to undertake to alleviate the suffering of the majority. If he does that, he has my vote.

I personally contend that Imran Khan is incorruptible, a rarity in a political culture that thrives on bribery and pilfering and among the others stands as the most articulate, gifted with charisma and a jocular nature. But, then again, giving fiery speeches or cracking anecdotes in front of throngs of impassioned followers, does not translate into real change. He needs to do much more to prove his credentials; he is considered mercurial and tentative in his policy making, and has more a reputation of a playboy than a politician, at least in the West. PTI, under the lingering shadow of IK, is a one man show, and as I recall, the party fared rather poorly in previous elections, garnering less than 1 percent of the total vote cast. The party does not have the stature or the expertise or the experience to battle Pakistan’s endemic problems. Consider the following excerpt taken from an article in Dawn:

The current PTI secretary general is Karachi-based Dr Arif Alvi, adentist for the city’s elite who has pots of money and a techie son who lets go of no opportunity to promote his father’s political party through purportedly non-political ventures. The main policy advisor of the party is Dr Shireen Mazari, who for years ran a government-funded think tank in Islamabad before serving for a short period of time as the editor of the Lahore-based English daily The Nation. If she is known for anything, it is certainly not a non-jingoistic understanding of Pakistan’s foreign and security policies. The brain behind Mr Khan’s latest makeover as Pakistan’s savoir in the making — one more time after a failed earlier attempt — is Haroonur Rashid, a columnist with the daily Jang who once wrote the authorised and laudatory biography of Gen Akhtar Abdur Rehman, an intelligence czar under Gen Zia and one of the many architects of Pakistan-backed militancy in Afghanistan in the 1980s.

Imran Khan may have mesmerized on the cricket pitch, anchoring Pakistan to cricketing glory, but this is, as we should all recognize, the real word of diplomacy and public policy. While I respect his leadership and oratory skills, I believe that he does not have the acumen to survive in the political arena, let alone carve out a distinct destiny for Pakistan in the community of nations. Don’t take me wrong, I am not an Imran basher, far from it; I was delighted when he managed a staggering 100,000 people in his historic Lahore rally. I feel a sense of pride welling up inside me when he takes a firm stand on the drone strikes that are infringing our sovereignty. I see hope in him, that four letter word wholly absent in the last two decades. But one must deal with the facts, not get carried away in the spur of the moment. We Pakistanis are an excitable bunch, to be painfully honest, and have clung on to Imran as if he embodies the Messiah we have been long waiting for. But is he the Messiah or a demagogue feigning to be one? Only time will tell.

Yes, Imran does have the backing of the youth, but whether this ‘Facebook’ following translates into real political capital remains to be seen. Will these same people turn up at Election Day-the all important day- to cast their votes? I have my doubts about him, were you to seek my opinion. For the sake of our country, for the millions living below the poverty line, I hope I am terribly, horribly, colossally wrong.