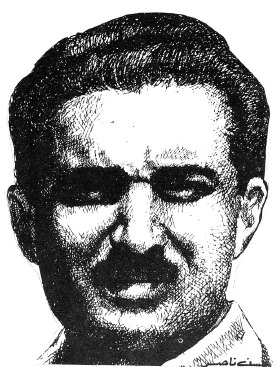 Today, November 13, marks the death anniversary of Hasan Nasir Shaheed who was succumbed to death in infamous Lahore Fort’s chamber of horrors in 1960 by Pakistani state. Scion of an aristocratic family of Hyderabad, Deccan, Hasan Nasir was a student at the Cambridge University in England, when he came under the influence of the communist party, which had a vibrant presence in the academia of UK during the post WW II period.

Hasan had fought, along with Makhdoom Mohiuddin and others, in the Telangana armed struggle. He was a maternal grandson of Nawab Mohsin-ul-Mulk. After the Partition of British India, he migrated to Pakistan and soon became, to the new ruling classes of the country, one of the most feared communists in Pakistan. Thus, despite being the scion of an aristocratic family of Hyderabad, Deccan, he had taken up the cause of the oppressed.  e was sent by the CPI (Communist Party of India) as assistant to Sajjad Zaheer, who took over as the secretary general of the party in Pakistan.

The CPP (Communist Party of Pakistan) was implicated in in the so called Rawalpindi conspiracy case of 1951. Besides army, navy and air force officers, Sajjad Zaheer, Faiz Sahib, Hasan Nasir and a few journalists were arrested. Faiz sahib wrote some of his best poetry in Hyderabad Sind jail.

The Lahore Fort was a symbol of terror in Pakistan at that time. This symbol of Mughal majesty had been turned into a draconian detention and investigation center during the period of British colonialism. The ‘criminals’ of the independence movement were often detained in the Fort for questioning through questionable means. After 1947, the Criminal Investigation Department (CID) took over the command of the Lahore Fort. After the ban on the Communist Party along with its sister organizations, and the military coup of 1958, the Lahore Fort was often used to interrogate leftist political activists.

After Hasan Nasir’s murder his mangled body was hastily buried by the police. The reports of torture were frightening and succeeded in halting the protests for several months. There was such a fervor over his martyrdom that the President Ayub Khan government had to exhume his body to try to prove the prosecution point that he had committed suicide and was not killed. The reason was that the government did not want to let remain anything reminding the people of Hasan Nasir. Today, there remains nothing of that cell, where he was killed, except a wall containing a small window.

Hassan Nasir was not just a leader but was also a revolutionary poet. His poetry, and all other records belonging to him, had been wasted by the Pakistani agencies. Today, very few of his verses survive.

After Nasir’s death, his old mother, who had come from India for the burial, had made a speech at the graveside. ‘He died for a good cause,’ she had said as the tears poured down her face, ‘but I know I have many more sons who will carry on the fight for which Hassan Nasir gave up his life.’

To our misfortune, today not many from the young generation know about the real heroes who perished their lives in the lanes of truth and justice. When the sacrifices of individuals start vanishing from collective conscience of nations, the consequences we are confronting today, become inevitable. There is more and more need to remember and thank the persons like Hasan Nasir who were murdered in the darkest lanes.

Here’s elegy of Faiz Sahab written in 1961 for Hasan Nasir:

Note: The material for this article was taken from here, here and here.