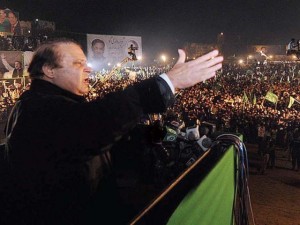 Nawaz Sharif aparently doesn’t approve unanimous resolution of the APC, which was held after US allegations of Pakistani state support for the Haqqani network, one should appreciate his stance in the APC. But in last few public appearances, he has demanded quick implementation of APC resolution, which makes things a bit  confusing and contradictory to his previous stance.  If he did not support APC resolution (in fact an ISPR press release), then why he is now demanding its quick implementation?

He also asked for the implementation of the agreements that the country political parties had come up with in the All Parties Conference.

After Nawaz Sharif’s excellent statement it was expected that PML N would support civilian government’s decision of awarding MFN status to India ; instead PML N sided with the Jamad ul Dawah .

PML-N has reservations on MFN status to India

“He said he had strong reservations against the declaration of India as the Most Favoured Nation and called for taking it up in the Parliament.

“The entire nation is ready. We will not step back an inch from our stance because freedom is our destination,” Alvi said. A 20-year insurgency in Indian-administered Kashmir has left tens of thousands dead.

Nawaz Sharif on Wednesday said that Qureshi is an “old and respectable friend” and that he will be meeting him soon. Speaking to the media in Bahawalpur, Nawaz said that Qureshi is a “mature politician” and he will meet him when the later returns from Dubai. Qureshi, on Tuesday, had said that he still maintains “excellent” relations with Nawaz.

Sire , my sincere advice to you, as a political activist , is that if you are really interested in correcting the civil-miltary imbalance then you should stop supporting  the Jamat ul Dawah and opportunists like Shah Mehmood Qureshi.