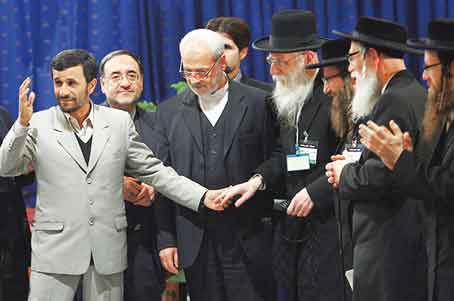 World bullies threat Iran often on the basis of biased, politicized and incorrect reports of the International Atomic Energy Commission (IAEA). Such reports are prepared on false assumptions and estimates usually in collaboration with Western intelligence services, which are famous for producing doggy dossiers.

The United States and its portage Israel are supported by the United Kingdom in their occupations and wars. But bully states want us to believe that Iran, Pakistan, Russia and China are threats to the world peace ignoring the fact that flawed U.S policies and the U.S unwanted presence in other countries could be actual threats.

Ruling elites of America have brought death and destruction to Iraq, Afghanistan, Libya and recently in Syria. Their next target is Iran and they are looking for a pretext to attack Iran. In their vicious propaganda campaign Iran is portrayed as an enemy of the Jewish people.

Ironically, some Western leaders dislike Israeli rulers. Their mistrust of Israeli leadership emerged at one of the G20 meetings in 2011 where the then French President Nicolas Sarkozy branded Israeli Prime Minister a liar in a private conversation with his U.S. counterpart Barack Obama.

“I cannot bear Netanyahu, he’s a liar,” Sarkozy told Obama, unaware that the microphones in their meeting room had been switched on, enabling reporters in a separate location to listen in to a simultaneous translation. “You’re fed up with him, but I have to deal with him even more often than you,” Obama replied, according to the French interpreter”. The report was carried by Reuters news agency.

The U.S and EU leaders know that Israeli policies are wrong, yet in public the West defends Israeli crimes. The same is true for Al-Qaeda. Apparently, the West is at war against Al-Qaeda but in practice Western ruling elites use Al-Qaeda when and where they need it. Al-Qaeda was created under the nose of Western intelligence agencies and Bin Laden was groomed by the West. Now the West is using Al-Qaeda and its affiliated groups to destabilize the Middle East region and will ultimately use it against Iran. Saudi Arabia, Gulf states and to some extent Turkey are pursuing an agenda that suits Western interests.

The current situation in Syria is also the result of foreign intervention because Syria is an ally of Iran and a supporter of Hezbollah. The West has invested in manufacturing a ‘revolution’ in Syria. Like Libya outside extremist armed groups are used in Syria. The United States has been providing them weapons and training while Saudis are funding the armed groups. The result is the bloody civil war in Syria that has ruined the country. Aims of the Syrian adventure also include disruption of the Syrian channel between Iran and the Lebanese Hezbollah.

Unlike Israel and the United States, Iran has not attacked any country, Iran does not bomb innocent civilians but the U.S and Israel do. Israeli rulers have been involved in sabotage and murders of their opponents with impunity. Israeli military has been committing crimes against humanity with the full U.S backing still some Western leaders and commentators showcase Israel as the only ‘true democracy’ in the Middle East.

Under the Iranian democratic system elections have been taking place in the country even at times when Iran was at war with Iraq. Back then, the U.S. was supplying arms to Saddam Hussein. The Western powers do nit like the Iranian political system. It is their right but in their opposition to Iran Western elites and the media cross the line of civilized disagreement.

Some Western journalists and commentators like to brand Iran as a terrorist state and an enemy of the Jewish people. The Western media distorted a statement of the Iranian President Mahmoud Ahmadinejad saying that he wants to wipe-out the Jewish people from the face of the earth. In reality Iran has the highest number of Jewish population in the Middle East. More than 25000 Jews have been living in Iran at their own will. For centuries Iran is their homeland. Even after of the Islamic Revolution of 1979, there has not been major incidents of discrimination against Iran’s Jewish community.

There are more than a dozen synagogues in Tehran where Jews offer their religious ritual freely. Most Western journalists portray Iran as an enemy of the Jewish people, however, there are some exceptions. One such honest Western journalist is Roger Cohen of the New York Times. In February 2009, after his visit to Iran he wrote:

“The reality of Iranian civility toward Jews tells us more about Iran — its sophistication and culture — than all the inflammatory rhetoric. That may be because I’m a Jew and have seldom been treated with such consistent warmth as in Iran. Or perhaps I was impressed that the fury over Gaza, trumpeted on posters and Iranian TV, never spilled over into insults or violence toward Jews. Or perhaps it’s because I’m convinced the “Mad Mullah” caricature of Iran and likening of any compromise with it to Munich 1938 — a position popular in some American Jewish circles — is misleading and dangerous”.

But not all Western journalists are like Roger Cohan. They do not present full context and tell the truth selectively.

Ahmedinejad opposes the state of Israel because since its creation the state of Israel has transcended its boundaries. Israel has violated the United Nations resolutions and the international law. It continues to occupy more and more land and kill more and more people. Israel’s violations of law and its anti-human policies have caused problems. Opposition to a state does not amount to the elimination of a people.

Israel should have been created in Europe in the first place because European had committed crimes against the Jewish people, not Arabs or Muslims. Throughout the history Jews and Muslims lived together. Prophet Mohammad signed treaties with Jews and both communities lived in peace.

During the 800 years of the Muslim rule in Spain, Jews played a positive and productive role in the glory of the Muslim Spain. Indeed, things were so good for Jews there that to date half of the Jewish world is known as Sephardi meaning “Spanish.” Some of the greatest Jewish scholars wrote in Arabic and also impacted Muslims. In fact, the Muslim Spain did remarkably well because of the large number of Jews who were allowed to operate freely there.

In the 12th century, a great Jewish philosopher Moses Maimonides (Moses ben Maimon) who codified Jewish scriptures and writings was deeply influenced by the Muslim philosopher Ibn-Rushd (Averroes). Maimonides, a Jewish rabbi, also developed Ibn-Rushd’s work on Aristotle and tried to prove God’s existence– though Aristotle had denied the existence of a creator.

Historically Jews and Muslims didn’t have problems but Christians and Jews had. The Jewish people faced discrimination at the hands of Christians. Aggressive and violent Christians targeted Europeans Jews. Claims of Jewish deaths in the Holocaust could be exaggerated but the fact remains that Jews were killed by Europeans.

In the beginning of the 20th century Britain and the United States under the influence of influential Zionist movement planned to dump Jews in the Middle East. Jewish politics and life was destroyed in Central and Eastern Europe by Christians but Britain and the United States found a home for Jews in the Middle East by occupying the Palestinian land. The conflict between Palestine and Israel is the result of the decisions made by Europe and America.

Zionists control Israel and aim to expel the Palestinians from Israel. Despite criticism they are build more illegal settlements on the Palestinian lands. Zionists use lies, manipulations and naked force to achieve their goals. But all Jewish people are not warmongers and racists. Peace loving Jews are opposed to Zionist agenda and do not want to be identified with a narrow minded and violent gang.

Karl Marx, Vladimir Lenin and Leon Trotsky all had Jewish roots but they were peacemakers. They wanted justice for all and believed in equality. They struggled for the rights of working classes. Today, intellectual and writer Noam Chomsky is a tower of resistance against the U.S imperialist designs.

Indeed exceptionally bright and talented Jewish scientists, thinkers, politicians, writers and intellectuals have immense contributions in the development and advancement of the modern world. The world would be a different place without the achievements of people such as Albert Einstein and Alfred Fried. Musician Leonard Bernstein, actress Elizabeth Taylor, film director Steven Spielberg and many other Jews are loved by people of all faiths and colors.

The point is that there is no conflict between Judaism and Islam. Zionists, fundamentalist Christians and extremist Muslims have been playing in the hands of powerful ruling classes, who would like to present the conflict in the Middle East as a war of faiths. Indeed super-rich people and corporations want more power and more control. They are afraid of working classes and oppose egalitarianism.

The purpose of attacking Iran is not the protection of Jews because Iran is not a threat to Jews. The real agenda is to let Saudi Arabia and Israel to police the Middle East region on the behalf of U.S and its Western allies. Therefore a large part of the Western media have been intellectually dishonest and factually wrong. Instead of exposing the hidden agenda, they present Iran as an enemy of the Jewish people.