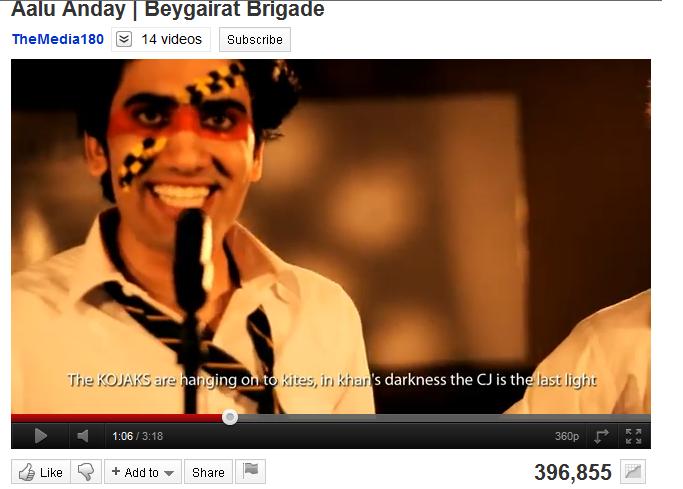 Last month, what seemed like an innocent and satirical attempt to mock the influencing and prevalent mood of hysteria and conspiracy theories in Pakistan, a group of three 20-something boys led by Ali Aftab came up with a song called “Aaloo Anday” (396k views, 7.25k likes and 0.38k dislikes on Youtube). What made their song and its video most interesting was the name of the band “Beyghairat Brigade”. We all know how much the people of Pakistan take pride in their “Ghairat”, the same “Ghairat” that was sold for Rs. 200 million in exchange for release of Raymond Davis. The “Ghairat” was trumpeted by a so-called “Ghairat Brigade” that has literally brought Pakistan to a brink of war within and abroad. The general chants of Ghairat Brigade remain that Pakistan is a fort of Islam; Pakistan’s biggest asset is the nuclear arsenal; The drone attacks are an attempt to subvert our ghairat; Taliban are good; all things that happen bad in Pakistan is conspiracy of Yahood-Hanood-Nasara and that President Zardari and the PPP is bad for Pakistan. To top it all off: Imran Khan is a liberal!

There are many players in the Ghairat Brigade whom we all know, but this post is about the boys of Beyghairat Brigade and their contemporaries in the media industry.

In the last few years, youngsters like Samad Khurram (famous for not accepting an award from US Ambassador despite of being on a US Scholarship in Harvard), Ali Moeen Nawazish (“World record holder” of top notch grades in Cambridge System Exams), Imaan Hazir Mazari (daughter of her highness Dr. Shireen Mazari and a founder of Pakistan Youth Forum), Ibrahim Shahid (Another  “World record holder” of top notch grades in O levels) have come on the media both print and electronic symbolizing the youth of Pakistan and the future of our country despite of “nothing being well” in Pakistan. Similarly, we have musicians and media personalities who have directly or indirectly used “Ghairat” as part of their strategy to succeed. These would include Shehzad Roy (Laga Reh, Kya Derta Hay), Strings (Mayn bhee dekhoon ga), Ali Azmat (who famously claims that music has been used to make us think like zombies). Another tier would include Abrar ul Haq and Jawwad Ahmed who have used their star status and platforms for possible entry into politics. All these people make very good stories for Pakistan for the change that our youth is demanding. What the change would feel like was foretold to us by Imran Khan on 30th October, 2011 in his mammoth rally in Lahore.

The change was: declare all assets of politicians, shun America and embrace China, pray alone on the stage and have a grand concert managed by DJ Butt.

These youth and leaders of pop-culture represent, in the main,  the pro-establishment point of view in Pakistan.

On the other hand, the contrarian view is not highlighted by our media. A courageous group of 20 something boys raised points in their 3 and half minutes song and video, which I always wanted to find out. They have been termed as PPP touts, PML-N touts, Ahmedi agents for taking the name of Dr. Abdul Salam, Anti-Army, Anti-Judiciary  etc. They themselves jokingly say in their video that “this video is sponsored by Zionists”. The video may have been a one-off affair, but Ali Aftab, the singer of the band, has written a thought provoking article in Pakistan Today (cross posted on LUBP) titled “Who’s got the Khan’s back?”. Ali Aftab has committed blasphemy in the form of questioning the future of Pakistan i.e Imran Khan. All hell has broken loose with PTI supporters naming Ali Aftab as a puppet, uneducated man who can’t speak or write and off course, a conspiracy.

What the Beyghairat Brigade have done in their maiden (I hope not their last) effort is present a contrarian view which our establishment and their pseudo liberal allies in the form of Imran Khan and his PTI and all those drawing room intellectuals don’t want to ever hear.

Well done boys. What you have done is courageous. Don’t get bogged down by the tirade and accusations against you. You have pricked them bad, therefore they are after you. Afterall as they say “100 sunaar kee, 1 lohaar kee”.

Click here to post a comment
Vote for Imran Khan? – by Muhammad Anwar Ul Haq
Lifestyle Liberals and Political Liberals: Is LUBP a hurdle in the way of unity of liberals?