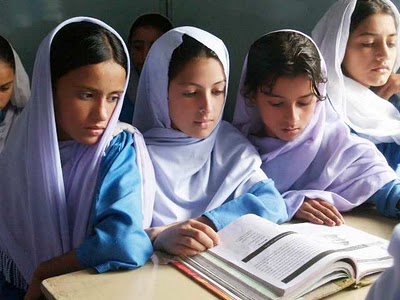 Editor’s Note: Curriculum reform is the need of the hour. In the last couple of days, 3 Pakistani Hindu doctors have been killed and Pakistan’s peaceful, hardworking and patriotic Hindu, Christain and Ahmadi muslims face the brunt of violence and bigotry.  While this goes on unabated, the Baloch and Shia muslims also face frequent attacks. This sorry situation is the direct result of the use of the State machinary by Zia ul Haq to spread hatred into every nook and corner of Pakistan.  Zia has been dead for over two decades but his legacy lives on in the form of those urban elites who refuse to accept religious bigotry as an existential problem for Pakistan and instead are bent on undermining the transition to democracy and empowering saner elements within the society.

(AP) ISLAMABAD — Text books in Pakistani schools foster prejudice and intolerance of Hindus and other religious minorities, while most teachers view non-Muslims as “enemies of Islam,” according to a study by a U.S. government commission released Wednesday.

The findings indicate how deeply ingrained hardline Islam is in Pakistan and help explain why militancy is often supported, tolerated or excused in the country.

Pakistan was created in 1947 as a homeland for the Muslims of South Asia and was initially envisaged as a moderate state where minorities would have full rights. But three wars with mostly Hindu India; state support for militants fighting Soviet-rule in Afghanistan in the 1980s; and the appeasement of hardline clerics by weak governments seeking legitimacy have led to a steady radicalization of society.

Religious minorities and those brave enough to speak out against intolerance have often been killed, seemingly with impunity, by militant sympathizers. The commission warned that any significant efforts to combat religious discrimination, especially in education, would “likely face strong opposition” from hardliners.

The Islamization of textbooks began under the U.S.-backed rule of army dictator Gen. Zia-ul-Haq, who courted Islamists to support his rule. In 2006, the government announced plans to reform the curriculum to address the problematic content, but that has not been done, the study said.

Pakistan’s Islamist and right-wing polity would likely oppose any efforts to change the curriculum, and the government has shown no desire to challenge them on the issue.

The report found systematic negative portrayals of minorities, especially Hindus and, to a lesser extent, Christians. Hindus make up more than 1 percent of Pakistan’s 180 million people, while Christians represent around 2 percent. Some estimates put the numbers higher.

There are also even smaller populations of Sikhs and Buddhists.

“Religious minorities are often portrayed as inferior or second-class citizens who have been granted limited rights and privileges by generous Pakistani Muslims, for which they should be grateful,” the report said. “Hindus are repeatedly described as extremists and eternal enemies of Islam whose culture and society is based on injustice and cruelty, while Islam delivers a message of peace and brotherhood, concepts portrayed as alien to the Hindu.”

The books don’t contain many specific references to Christians, but those that “that do exist seem generally negative, painting an incomplete picture of the largest religious minority in Pakistan,” the report said.

Attempts to reach Pakistan’s education minister were not successful.

The textbooks make very little reference to the role played by Hindus, Sikhs and Christians in the cultural, military and civic life of Pakistan, meaning a “a young minority student will thus not find many examples of educated religious minorities in their own textbooks,” the report said.

“In most cases historic revisionism seems designed to exonerate or glorify Islamic civilization, or to denigrate the civilizations of religious minorities,” the report said. “Basic changes to the texts would be needed to present a history free of false or unsubstantiated claims which convey religious bias.”

The researchers also found that the books foster a sense that Pakistan’s Islamic identity is under constant threat.

“The anti-Islamic forces are always trying to finish the Islamic domination of the world,” read one passage from a social studies text being taught to Grade 4 students in Punjab province, the country’s most populated. “This can cause danger for the very existence of Islam. Today, the defense of Pakistan and Islam is very much in need.”

The report states that Islamic teachings and references were commonplace in compulsory text books, not just religious ones, meaning Pakistan’s Christians, Hindus and other minorities were being taught Islamic content. It said this appeared to violate Pakistan’s constitution, which states that students should not have to receive instruction in a religion other than their own.

The attitudes of the teachers no doubt reflect the general intolerance in Pakistan — a 2011 Pew Research Center study found the country the third most intolerant in the world — but because of the influence they have, they are especially worrisome.

Their views were frequently nuanced and sometimes contradictory, according to the study. While many advocated respectful treatment of religious minorities, this was conditional upon the attitudes of the minorities, “which appeared to be in question,” the report said. The desire to proselytize was cited as one of the main motivations for kind treatment.

Click here to post a comment
The concept of brotherhood in Islam: How Muslims view each other and how they view Non-Muslims
Zardari’s zen politics -by Irfan Waheed