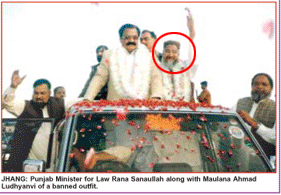 PML-Q MNA Waqas Akram of Jhang has accused Punjab Law Minister Rana Sanaullah of having ties with the leader of Jamaat Ahl-e-Sunna (formerly Sipah-e-Sahaba) and of touring Jhang with this militant in an attempt to gain some votes.

Waqas Akram’s allegation was seconded by Minister of State for Interior Tasneem Qureshi who said that the issue would be taken up with the Interior Ministry and by PPP chief whip and Labour and Manpower Minister Khurshid Ahmad Shah. Waqas Akram also got unexpected support from a member of Rana Sanaullah’s own party Rashid Akbar Niwani who described how the police of his district Bhakkar are helpless to arrest this militant leader. He even went so far as to say that “This is ‘Azaab-i-Elahi’ (divine torment) we are nurturing” As Raja Asghar notes in his report, Niwani was himself wounded in a suicide attack at his home which might explain his bold stance against his own party member.

According to Waqas Akram:

Speaking on the point of order in National Assembly, Sh Waqas Akram said that provincial law minister Rana Sanaullah visited Jhang on February 21 in connection with bye-election in PP-82. During his visit, law minister met with the chief of a banned organisation and took him to the election campaign in an official vehicle of the Punjab government with police escort headed by a Deputy Superintendent Police (DSP), Waqas Akram further alleged.
He further said that he had no interest in the said constituency (PP-82), as it was a rural constituency from where PML-Q had fielded no candidate, however, PPP and PML-N were contesting the elections in that constituency.
“I urge these political parties not to put the lives of people in danger for the sake of some votes,” he appealed.

In October 2009, Ayesha Siddiqua had described the hostility and non-cooperation of the Jhang district government as well as the Punjab government in her attempt to learn more about militancy in the district. Ayesha Siddiqua especially mentioned the accusations made by Rana Sanaullah that by trying to study the issue of sectarian militancy, she was “using a Western lens” to look at the issue. Rana Sanaullah also went out of his way to deny the presence of Jaish-e-Muhammad in Southern Punjab. Now it turns out that not only is Rana Sanaullah denying the presence of militancy in Southern Punjab but he is also maintaining his ties with these groups in order to strengthen his vote bank. Shame on PML-N leaders like Rana Sanaullah for allying themselves with terrorist groups who are slaughtering innocent Pakistanis and launching attacks against other PML-N politicians. Will it take a suicide attack on Rana Sanaullah for him to finally see reason?

Click here to post a comment
Facts about Chasma-Jhelum hydropower plant – by Qudrat Ulla
Was Jinnah Secular? Facts about the creation of Pakistan compiled by Aamir Mughal