There is consistent and irrefutable evidence of Ejaz Chaudhry’s (Vice President and Incharge Youth and Students Affairs of Pakistan Tehreek-e-Insaf) links with sectarian, terrorist organizations.

Sipah-e-Sahaba Pakistan (SSP aka LeJ) Lahore chapter has recently announced a religious seminar on 15 November 2011. Amongst the list of speakers is also the name of Mr. Ejaz Chaudhry, Vice President of Imran Khan’s PTI.

Here is a screen-shot:

Previously Ejaz Chaudhry actively participated in another extremist organization’s (Aalmi Majlis Tahaffuz Khatm-e-Nubuwwat – AMTKN) rallies in support of Mumtaz Qadri, the self-confessed killer of shaheed Salmaan Taseer. The AMTKN and SSP-LeJ are notorious because of their hate speech and acts of violence against Ahmadiyya Muslims. 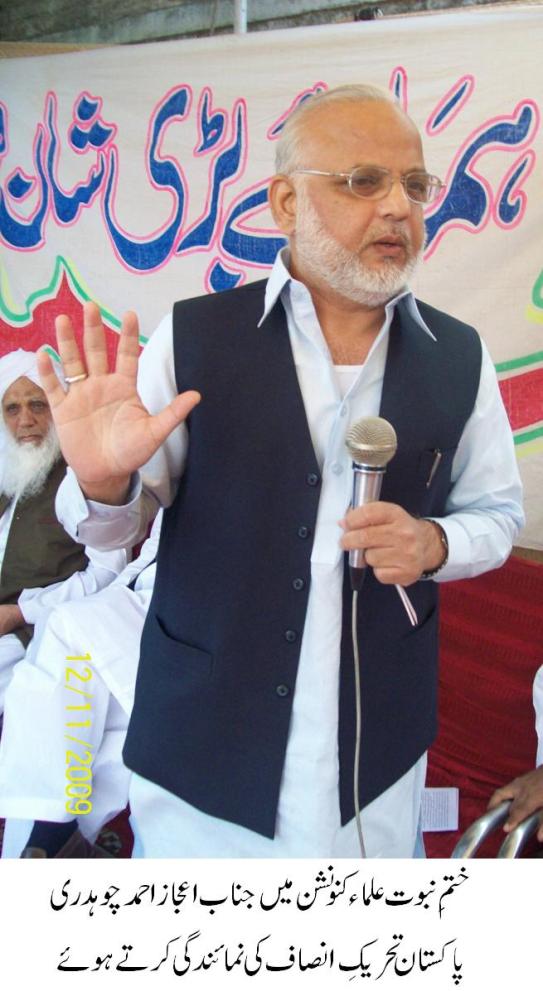 According to a PTH post, “Ijaz Chaudhry took the podium at the rally in Lahore on Sunday and has declared that he speaks for Imran Khan when he says that 295 C is a settled matter in Pakistan and is a godly law that no one should dare touch.” (Source: PTH)

Ejaz Chaudary is known to be a focal person of PTI in Punjab. He is an ex-Jamaati and a great organizer. He did a great job during lawyers movement.

His discourse (e.g., involvement of CIA and RAW in the PNS Mehran attack, Xenophobia against USA and India) is not much different from the TTP-SSP-LeJ-JI rhetoric: 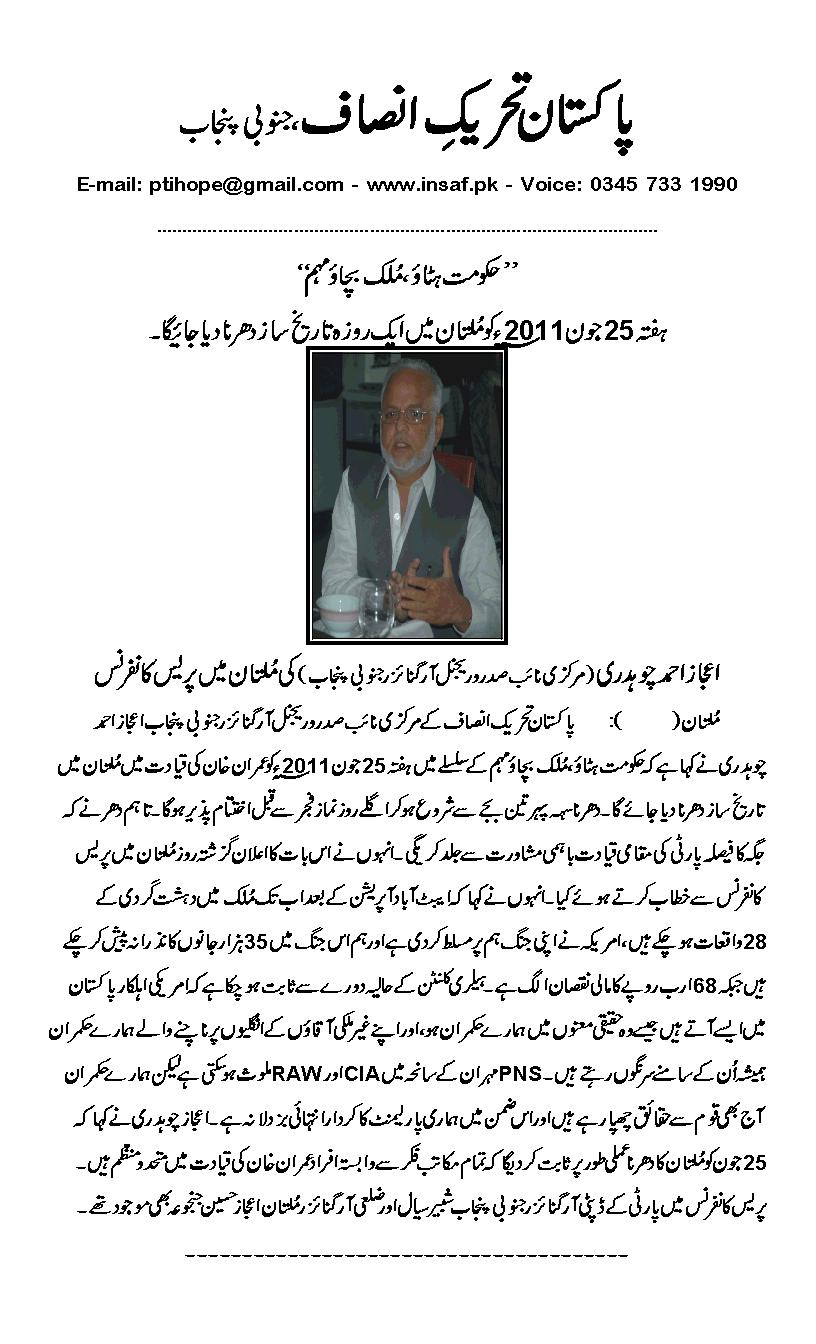 Pakistan Tehreek-e-Insaf Vice-President Ijaz Chaudhry pledged that his party would not allow any change in the law. He demanded public hanging of Raymond Davis, the US citizen who shot dead three Pakistanis on Thursday. (Source)

Blasphemy law: rally threatens long march
LAHORE, Jan 30: A big rally here on Sunday warned of a long march to Islamabad if the government attempted to amend the blasphemy law. A large number of charged activists of religious parties representing all schools of thought amid tight security marched from Nasser Bagh to Charing Cross on The Mall where leaders of mainstream parties like PML-N, PML-Q, PML-Z and Pakistan Tehrik-i-Insaaf also joined them. Tehrik-i-Insaaf vice-president Ijaz Chaudhry pledged that his party would not allow any change in the blasphemy law. He demanded public execution of Raymond Davis. (Source) President of Imran Khan’s Tehreek-i-Insaf South Waziristan, Toofan Burki garlanded Baitullah Mehsud and put traditional Pagri (turban) upon his head. (That tells why Imran Khan is most popular in Taliban and other terrorist organisations). Speaking on the occasion, the speakers said the electronic media is airing news regarding the death of Baitullah Mehsud, causing concern among the tribesmen. Therefore, the tribal elders decided that Mehsud should undertake visit of the tribal areas so that people could see him. (Source)

Click here to post a comment
Ba-unwan-e-Inqilab: A poem on Imran Khan – by Ahsan Abbas Shah
Reality check: How many in Imran Khan’s PTI rally in Lahore?